It was only a few weeks ago reports claimed that Jennifer Lopez and her fiance of two years Alex Rodriguez had pulled the plug on their relationship.

But after both denied the split and claimed to just be ‘working through some things,’ the pair were back this week in full force as Alex jetted to the Dominican Republic to join Jennifer as she films Shotgun Wedding.

The 51-year-old performer and the 45-year-old MLB star proved their partnership was still going strong, as they shared smiley snaps together on Friday while announcing a new business ambassadorship. 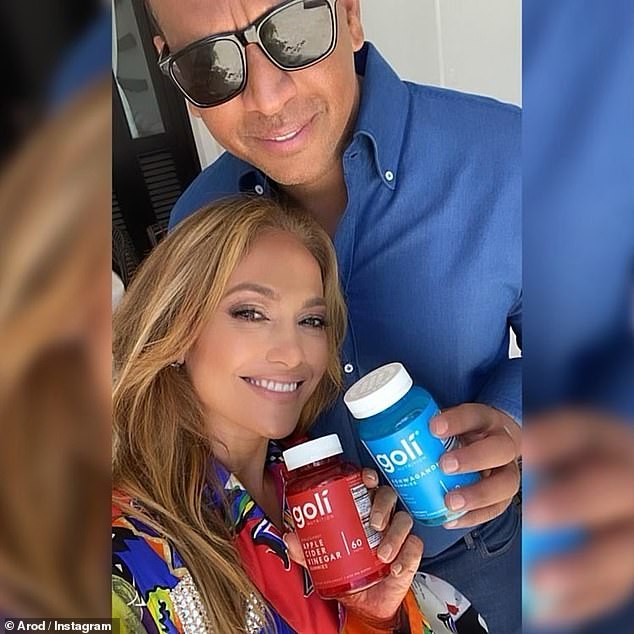 Back on: Jennifer Lopez, 51, and on-again fiance Alex Rodriguez, 48, prove their relationship is still going strong as they join forces for a new campaign amid reports they are ‘prioritizing their relationship’

Taking some time out of their relaxing day, the power couple posed with a new health-related product while smiling for the camera.

A-Rod announced that they were ‘very excited’ about their latest partnership, speaking on behalf of both he and Jennifer — a very coupley thing to do.

The photos seemed to show no trouble in paradise as they nuzzled up together, despite the fact that fans continued to believe they may be on the outs when she had posted photos without her massive engagement ring.

In the most recent set of snaps the Hustlers star seemed to strategically conceal her fingers, leaving followers to wonder whether or not she had slipped it back on her finger. 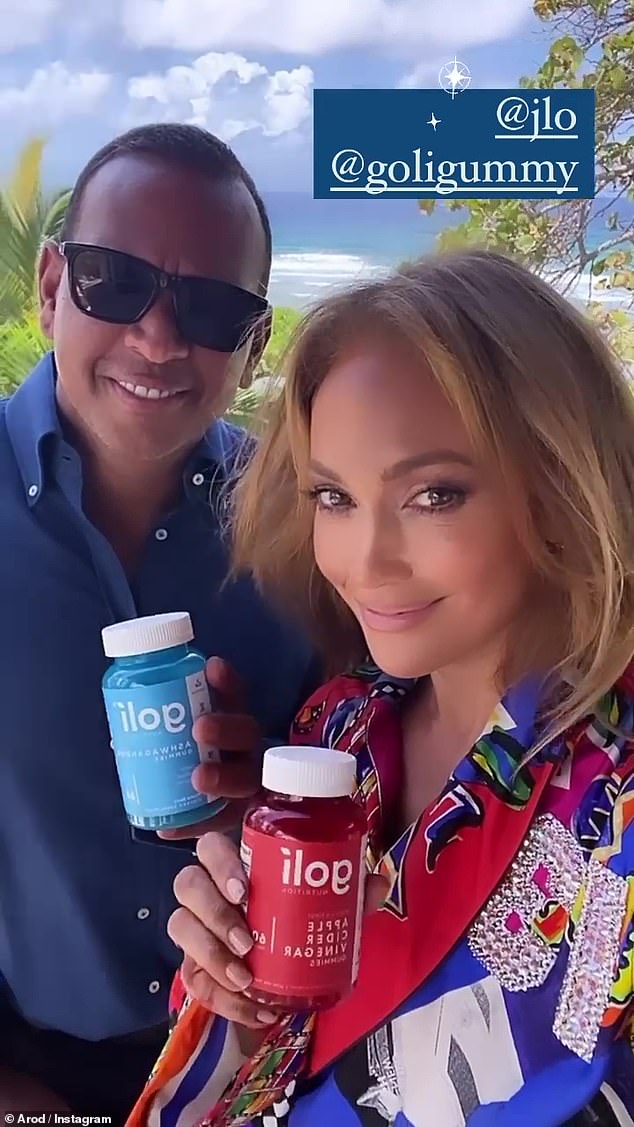 Trouble in paradise? The pair seemed to bed any issues or notions that they were not still together as they posed for some smiley snaps 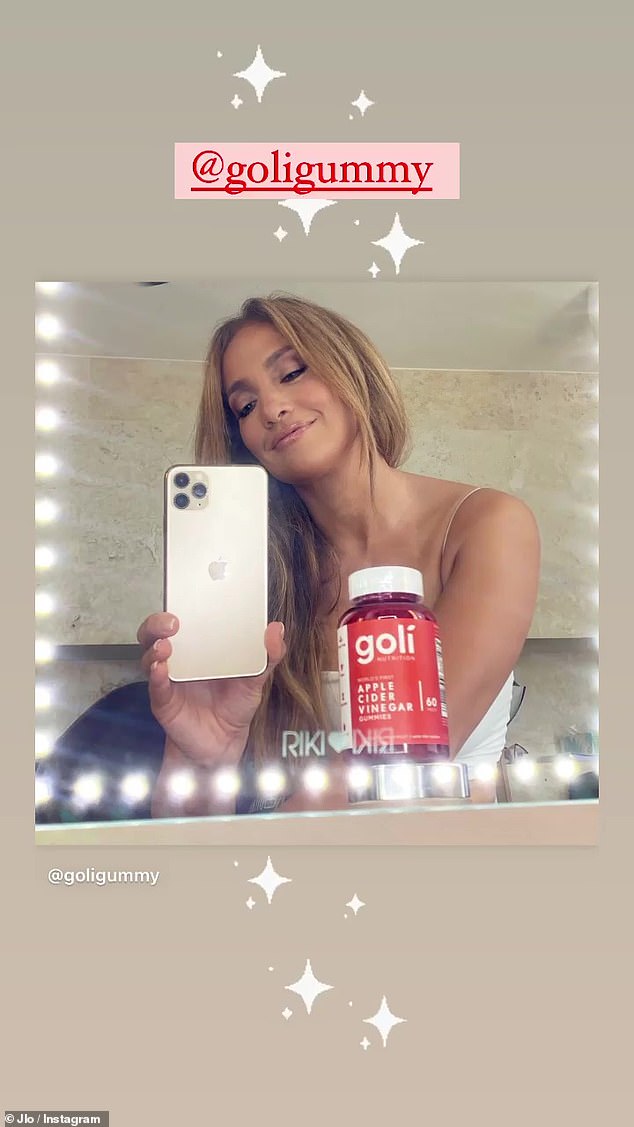 Engagement woes: JLo who had posted without her engagement ring on in recent days seemed to strategically shield her fingers from the camera, causing followers to wonder whether or not she had slipped it back on 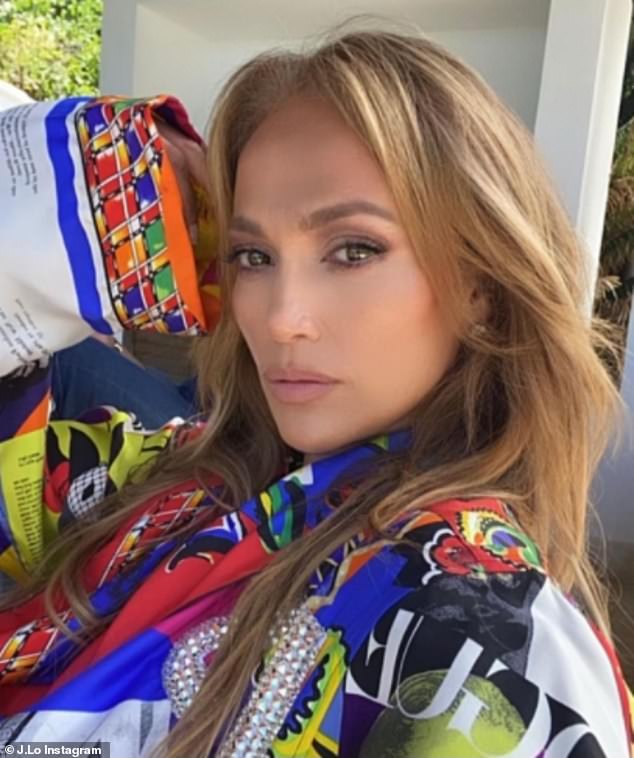 JLo Glow: She shared a solo selfie in the same bright colored blouse while taking a break from filming

Some believed that the pair’s breakup was prompted by third party interference, as reports began to swirl that the former MLB player may have stepped out during their engagement with Southern Charm star Madison LeCroy, 30.

LeCroy had claimed she had been texting with a very famous MLB player last year while in a relationship with castmate Austen Kroll, prompting speculation as to whom it may have been.

She had tried to clear up that anything unsavory had happened on the reunion show with Andy Cohen as she told him: ‘He contacted me, and yes, we DMed, but other than that there was nothing … I’ve never seen him [or] touched him,’ but never revealed the player’s identity.

However about a month later another Bravo cast member Shep Rose claimed that Madison had revealed that the player in question was A-Rod while they were filming, saying they were messaging but she had to sign an NDA. 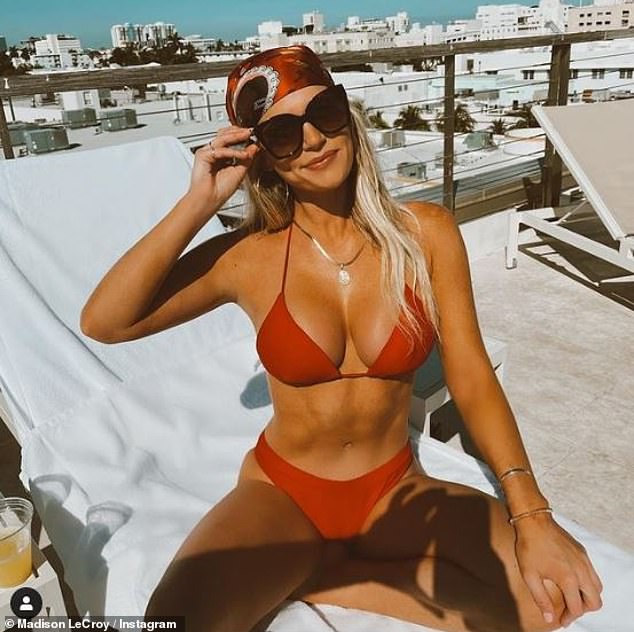 Interference: The pair revealed they were ‘working through things’ amidst claims from the Bravo star that she had DM’d and FaceTimed with A-Rod but she confirmed nothing was physical 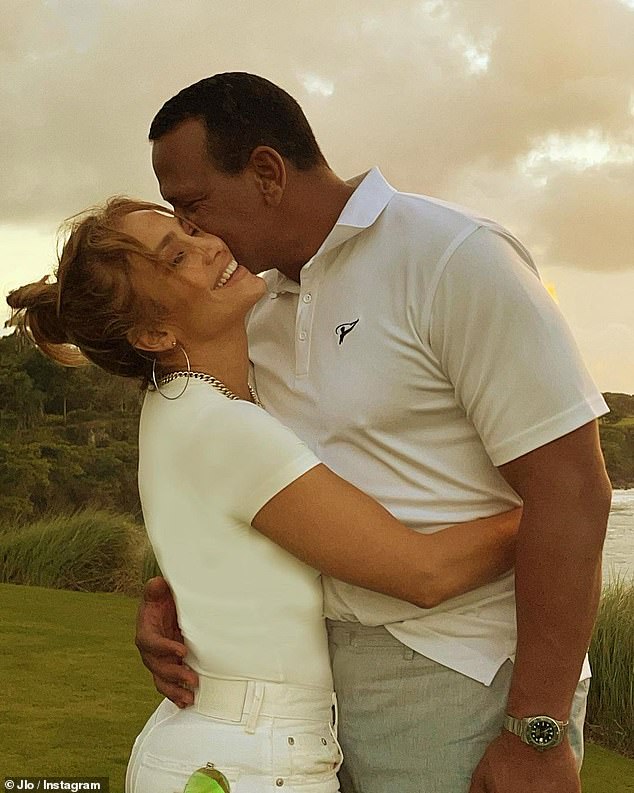 Friendly conversation: Rose continued to say that Madison made it seem like Rodriguez had approached her first, which raised quite a few eyebrows after he had denied knowing who she was; pictured February 28

‘She’s like, “Well, I’m DMing with A-Rod, but we can’t talk about that” or “they can’t air this because I signed an NDA”,’ he said while speaking to Cohen on his SiriusXM radio show.

He continued to say that Madison made it seem like he had approached her first, which raised quite a few eyebrows after Rodriguez had denied knowing who she was.

LeCroy continued to give clarity on the situation, telling Page Six that they had ‘spoken on the phone’ but had ‘never been physical,’ calling him an ‘acquaintance.’

‘He’s never physically cheated on his fiancée with me,’ she said, adding that she’s ‘talked to him randomly, but not consistent.’ 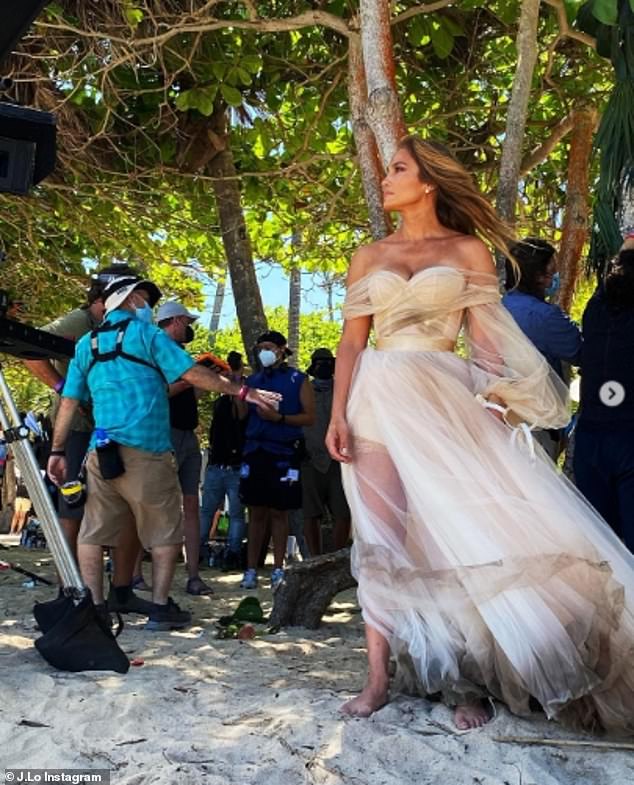 Moving forward: It has been said that the Hustlers star appreciates ‘grand gestures’ from her fiance as they continue to work on their relationship, him flying back to the DR while she films Shotgun Wedding; pictured March 19 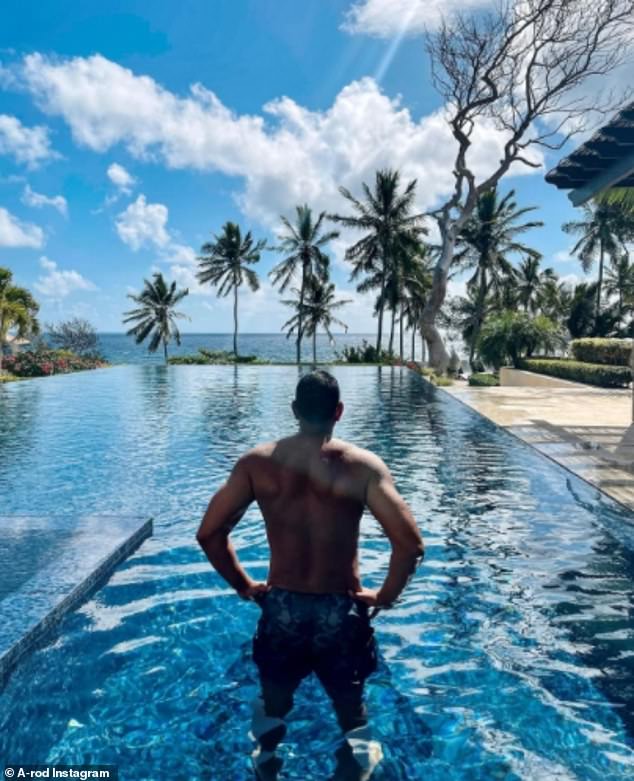 Stepping up: ‘It was important to Jennifer that Alex stepped up in a public way and showed his level of commitment to her with a trip to see her while working,’ an insider told E!; pictured March 26

With regards to his purported brief split from JLo, the pair chalked it up to a ‘bad day,’ though Lopez had revealed that the two were in couple’s therapy the month prior, telling Allure ‘I think it was really helpful for us in our relationship.’

And now it has been said that A-Rod is going above and beyond with grand gestures, as they continue to ‘prioritize their relationship,’ according to People.

‘It was important to Jennifer that Alex stepped up in a public way and showed his level of commitment to her with a trip to see her while working. Jennifer appreciates big gestures like these,’ an E! insider seconded.

The pair had to cancel their Italian destination wedding twice on account of the pandemic (it is unclear when or if they will reschedule) but are taking steps to rebuild any fractures in their partnership. 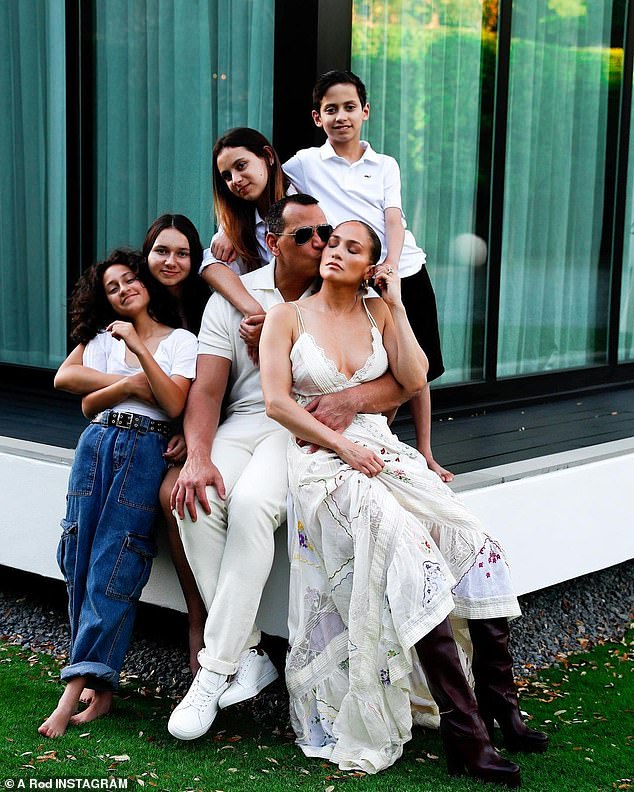 Blended family: First getting engaged in 2019 after dating for two years, the pair had to postpone their wedding twice on account of the pandemic, but are currently working to rebuild their partnership; pictured November 2020 with their kids