Gemma Collins motivates fans to ‘get moving’ as she flaunts slimmed down figure in crop top and leggings after incredible 3.5 stone weight loss

She’s been committed to overhauling her lifestyle in recent months and has lost an incredible 3.5 stone already, thanks to her hard efforts.

And not stopping there, Gemma Collins was seen back at it as she put herself through a workout in her garden on Thursday.

The former TOWIE star, 40, was seen showing off her slimmed down figure in a black crop top and gym leggings, while motivating fans to follow suit and ‘get moving’ as she worked up a sweat. 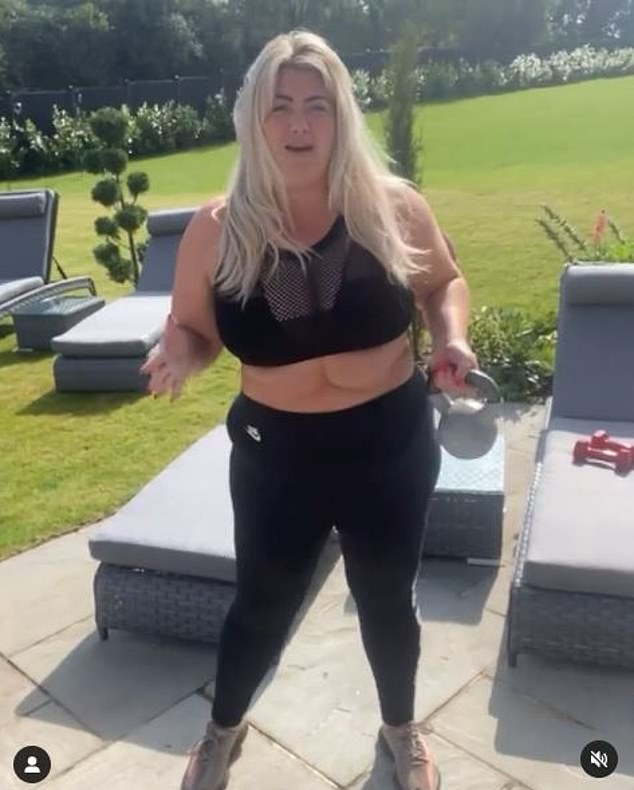 Work it: Gemma Collins was seen flaunting her slimmed down figure in her gym wear while doing a workout in her garden on Thursday

Armed with her kettlebell, Gemma filmed a video she shared with her followers on Instagram of her urging them to get up and at it.

Ready to start the day with a gruelling at-home training session, Gemma was in good spirits as she said: ‘ Good morning everyone, it’s been a long time since I’ve done one of this but I [wanted] just to let you know that the sun is shining, it’s a beautiful day, so if you want to go out and have a walk… go and do it.’

Leading by example, Gemma was then seen doing some bicep curls with her free weight, as she continued: ‘Literally, I’m just working in the garden today – because I’ve got a hectic, hectic day – with my kettlebell. There are so many different exercises you can do.’

So, if you’re feeling unmotivated – get up, GC style baby and get moving. Mwah,’ she said as she blew a kiss to the camera, hoping to inspire those watching. 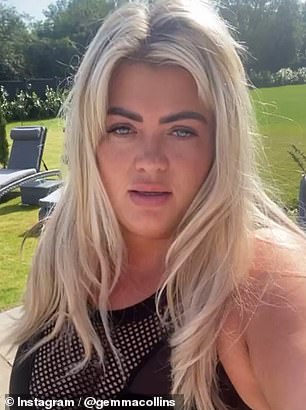 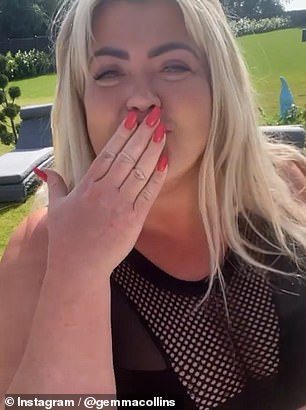 GC style: The former TOWIE star, 40, was seen encouraging fans to ‘get up’ and get motivated as she worked up a sweat 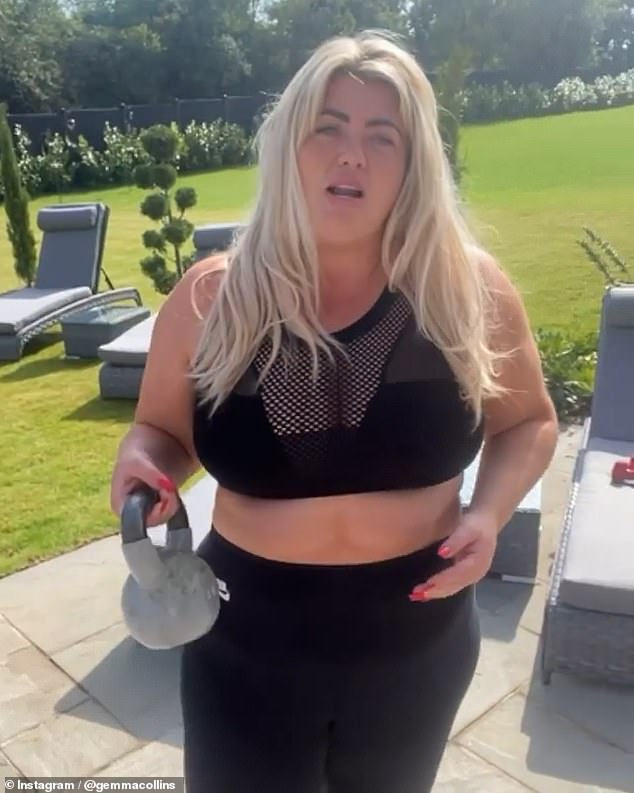 Fitness fanatic: Gemma was armed with her kettlebell as she toned her arms in the sun 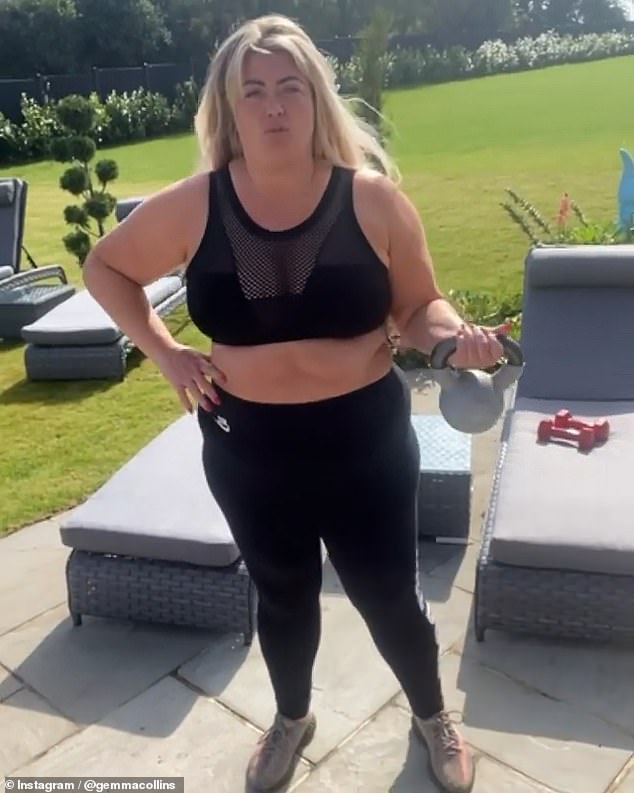 Sensational: The reality star looked fantastic in a mesh crop top and leggings

In her video, Gemma looked incredible as she showcased her amazing weight loss so far while wearing a black mesh sports bra.

Oozing confidence, the reality star paired her crop top with a sporty pair of leggings and trainers and she wore her blonde extensions down.

Dedicated to her new fitness regime, Gemma captioned her post: ‘MOTIVATION BABY come on let’s do this thank you for all your continued support.’

She was inundated with messages of support from fans and celebrities alike, with Scarlett Moffatt commenting on Gemma’s video: ‘You look unreal.’ 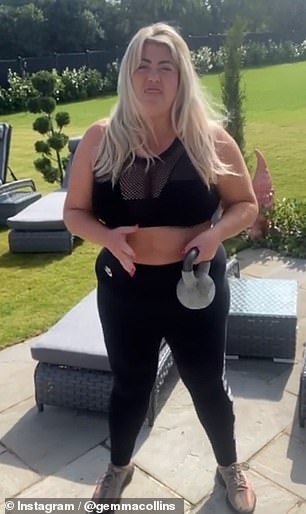 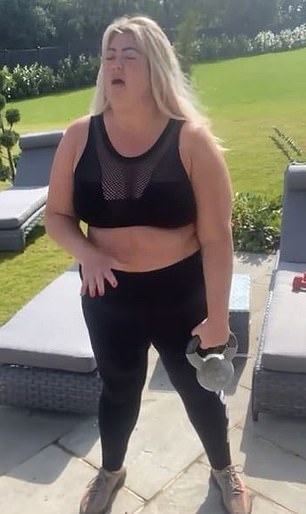 Lifestyle overhaul: Gemma has been following a strict high fat diet and training programme in a bid to lose weight and has so far lost an incredible 3.5 stone 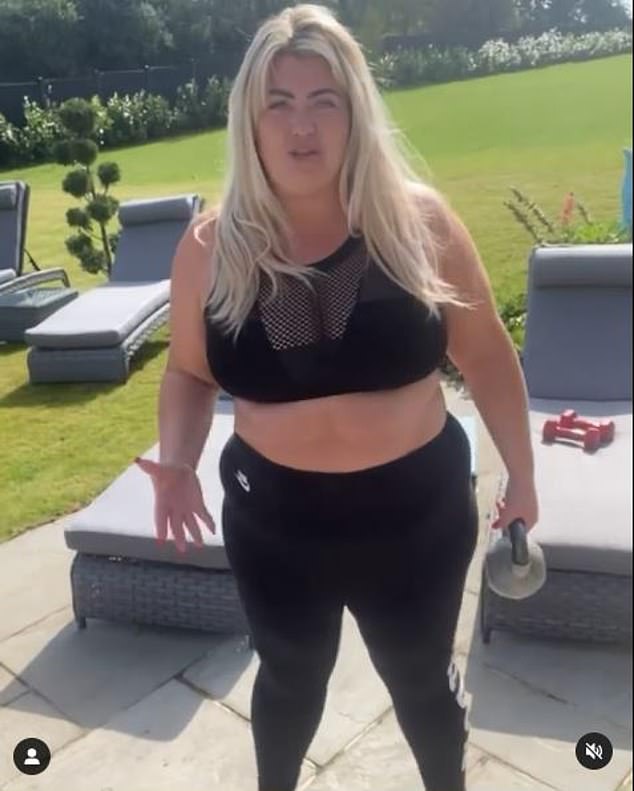 Blonde beauty: The Essex star was glowing as she kicked off her day with a work out

Gemma has been keeping fans updated with her weight loss journey and recently revealed she is ‘becoming stronger daily’.

‘It’s a great feeling,’ she told fans on social media, adding: ‘I hope you have all told yourself how beautiful you all are today.’

The Essex star revealed that she had to clear out her wardrobe and was selling her old size 26 cloths as they are now too big for her, following her shedding the pounds.

Show of support: Scarlett Moffatt and Fearne Cotton were seen gushing over the GC in the comments of her video post

Gemma said: ‘It’s all got to go. It’s kind of like the old me, I don’t wear this stuff anymore and obviously I have lost a bit of weight so it doesn’t fit anymore.

‘I have got hundreds of hoodies, I must have a hundred pairs of jeans and so many black leggings, it’s all going, but the good news is it’s all going on my Depop.’

Her new lifestyle has left Gemma feeling more ‘confident’ than ever, with the former Dancing On Ice star revealing she is following a ‘high fat diet’ in an interview with New Magazine.

‘I don’t weigh myself every week although to be honest I did this week and I lost another half a stone. I’m on a high fat diet – it all personal though, what works for me won’t work for you,’ she explained.

A high fat diet involves a person reducing the number of carbohydrates they consume and replacing them with healthy fats.

Gemma continued: ‘It’s nice to be able to fit into smaller clothes but more than anything it’s nice to feel healthy’ 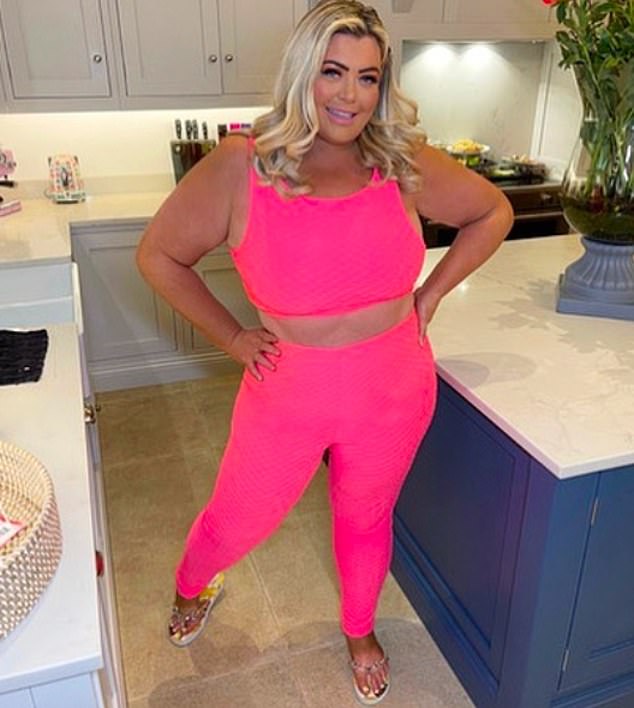 Body confident: Gemma says she is feeling ‘more confident than ever’ after overhauling her diet and lifestyle