Dax Shepard has admitted he recently relapsed with Oxycodone and kept it a secret while celebrating 16 years of sobriety.

On the Friday episode of his podcast Armchair Expert, the 45-year-old, discussed his history with painkillers and how he recently found himself battling a dependence on the pills again and keeping it a secret from those closest to him.

He admitted he felt immense guilt about hiding ‘this enormous secret’ and expressed regret for ‘gaslighting’ his wife Kristen Bell, and podcast co-host, Monica Padman. 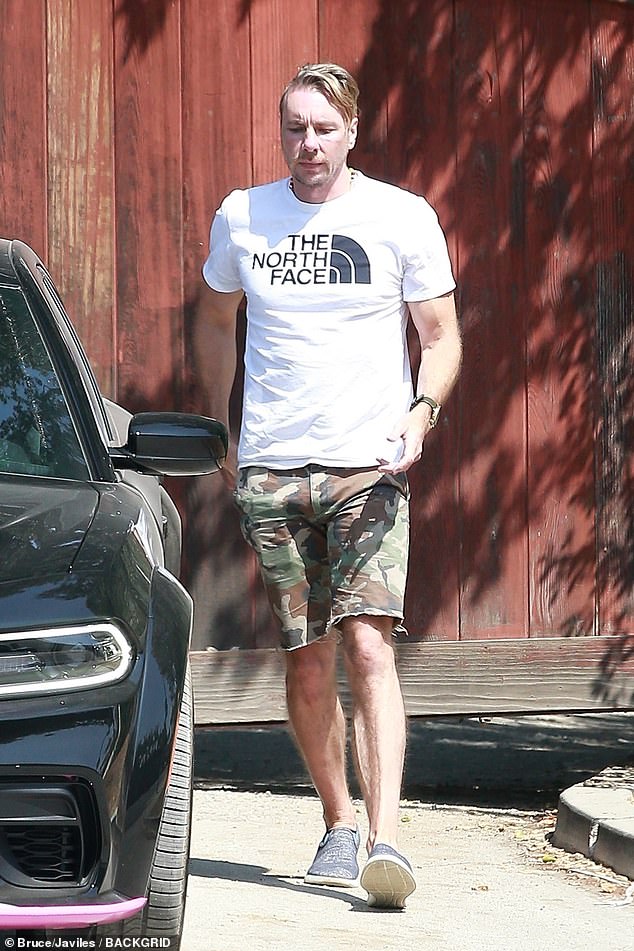 Dax Shepard (pictured Wednesday) has admitted he has been battling an addiction to painkillers. He had recently celebrated 16 years sobriety with his family

In the episode entitled ‘Day 7’ in reference to being seven day’s sober when it was recorded on September 21, the actor began to explain what has been going on.

‘I felt so terrible about the lying,’ he said, adding, ‘I was just very scared and I felt very, very lonely.’

The father-of-two said he was very proud of his making it 16 years with no alcohol or cocaine – and added that during his recent relapse he had no desire to take those substances.

Shepard said the problems started around six months ago after injuring his hand and shoulder, and then followed by a serious motorbike accident in August. He said he noticed he started ‘getting shadier and shadier.’

‘And I’ve not ever yet bought them,’ he said. ‘And then I do…For the last eight weeks maybe, I don’t know…I’m on them all day. I’m allowed to be on them at some dosage because I have a prescription.

‘And then I’m also augmenting that. And then all the prescriptions run out and I’m now just taking 30 mil Oxys that I’ve bought whenever I decide I can do [it].’ 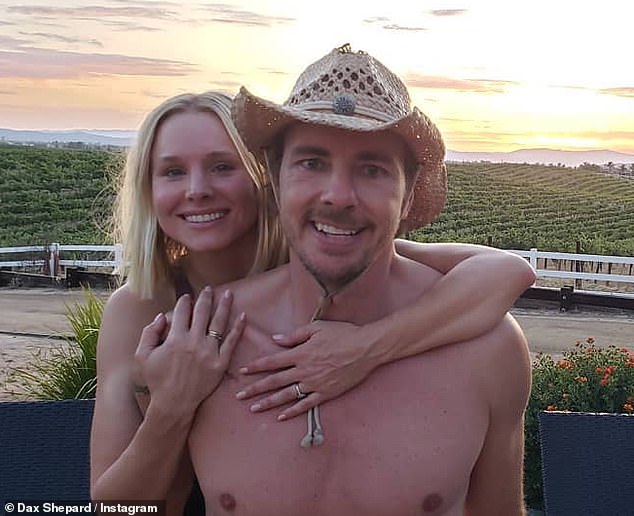 Gratitude: On September 1 the Bless This Mess actor’s family rallied around him as he marked 16 years sober, not knowing he was secretly battling a pill addiction 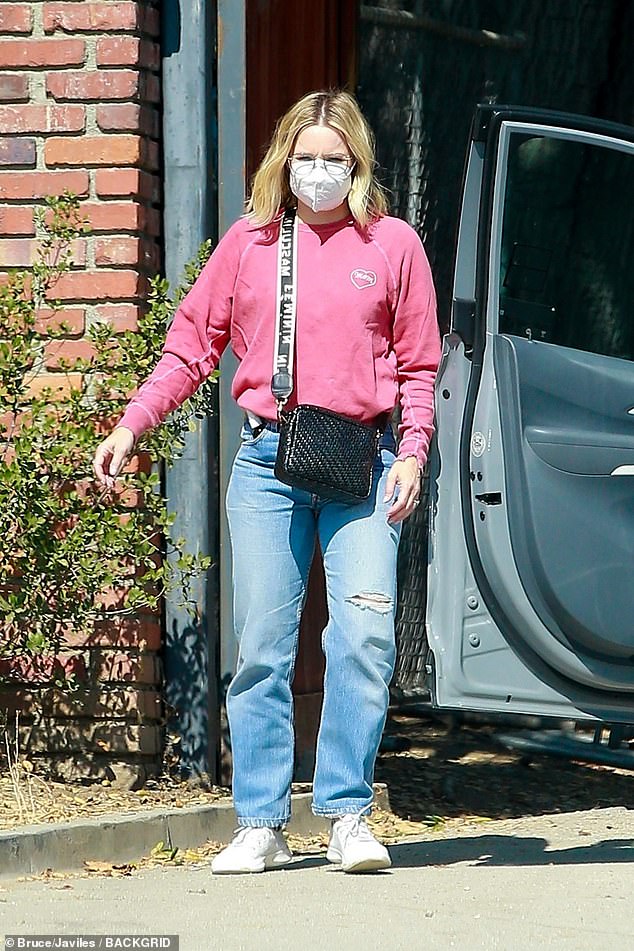 ‘I felt so terrible about the lying,’ Shepard, 45, said, adding, ‘I was just very scared and I felt very, very lonely.’ he also admitted to gaslighting Bell (pictured on Wednesday) and podcast co-host Monica Padman as he hid his problem from them

Shepard didn’t think there was a big problem because he was managing his day-to-day responsibilities.

But his podcast co-host confronted him and he began lying to her.

‘And I’m lying to other people and I know I have to quit,’ he confessed. ‘But my tolerance is going up so quickly that I’m now in a situation where I’m taking, you know, eight 30s a day, and I know that’s an amount that’s going to result in a pretty bad withdrawal.

‘And I start getting really scared, and I’m starting to feel really lonely. And I just have this enormous secret.’

He tried to lower his dosage but didn’t stick to the schedule he made for himself. 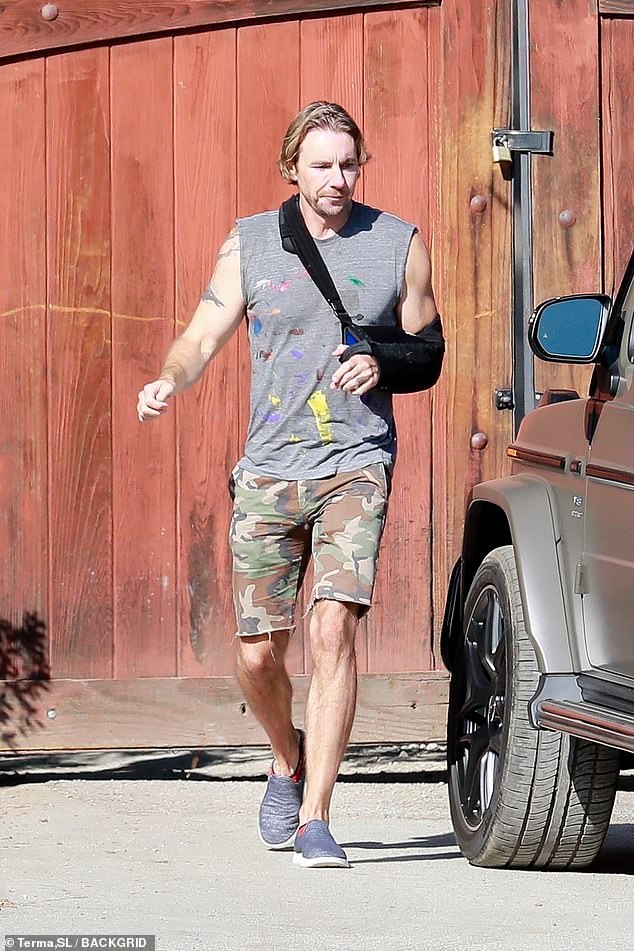 Confession: Shepard (seen here on September 1) said the problems started around six months ago after injuring his hand and shoulder. He also was involved in bike accident in August 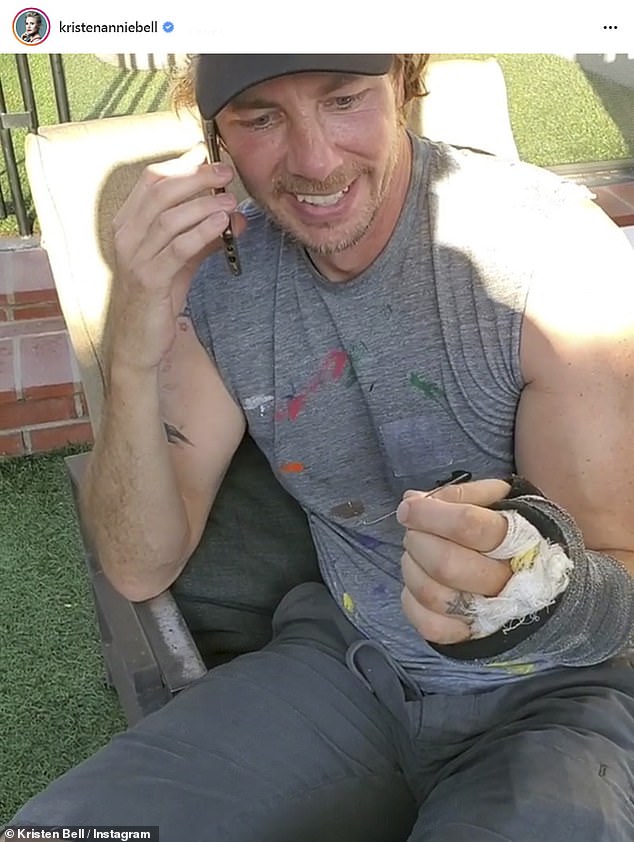 Secret: Shepard said didn’t think there was a big problem because he was managing his day-to-day responsibilities. He tried to lower the dosage he was taking daily but then realized he needed help

‘I now start getting pretty visibly detoxy and withdrawly,’ he said. ‘And I lie and start saying I’m having an arthritis flare up.’

One day he was in the car with Padman, about three weeks ago, and he finally admitted his problem.

He then admitted everything to Bell and Padman and followed up with a Alcoholics Anonymous meeting where he cried as he revealed what had happened.

‘It was very emotional, he said about the meeting. ‘It was a really surreal kind of experience.

‘When it was over, I actually, mentally – for the first time in a very long time – felt optimistic,’ he explained. 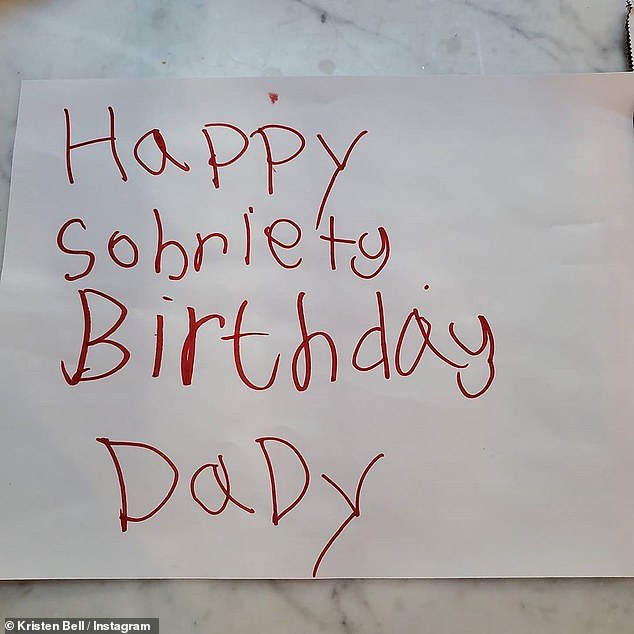 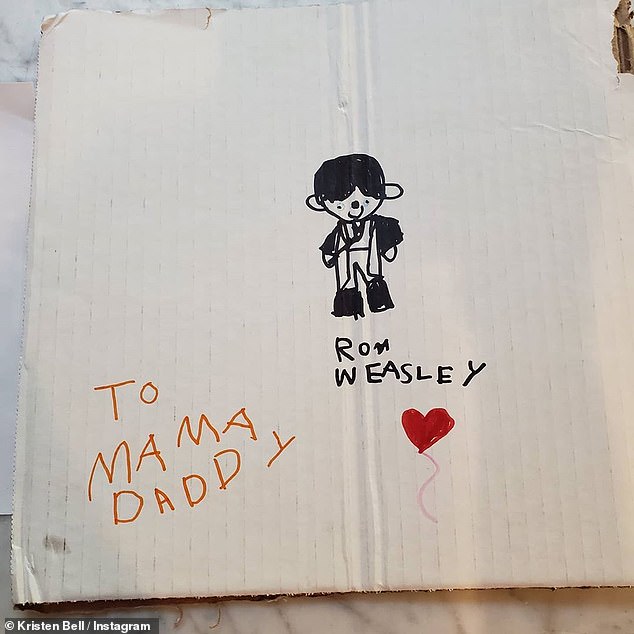 Sweetest thing: ‘Happy Sobriety Birthday Dady,’ their youngster scrawled in red marker. On the back she added the Harry Potter character Ron Weasley and a red heart-shaped balloon

‘Because for the last – a long time – I’ve known intellectually that things were going to get worse, that each encounter with it has gotten more shady and more dangerous. And I recognize that the next go-round would be “Oh, I can’t get pills, let’s snort heroin.”‘

Reflecting on his sobriety journey Shepard said, ‘The huge gift that the 16 years did give me was, I used to be able to gaslight people daily, and it didn’t bother me,

‘And I’ve had a good 15 1/2 years, or maybe more, of maybe not gaslighting people, and I just don’t have that tolerance for it.’

As he began to detox, he recalled, ‘I’m sweating bullets; I’m jerky; my back kills. It’s terrible,’

‘I’ve never detoxed from opiates, and I have so much compassion for these junkies who have like f**king cycled through this 20-30 times.’

Shepard admitted his problems began when his father passed away in 2012. 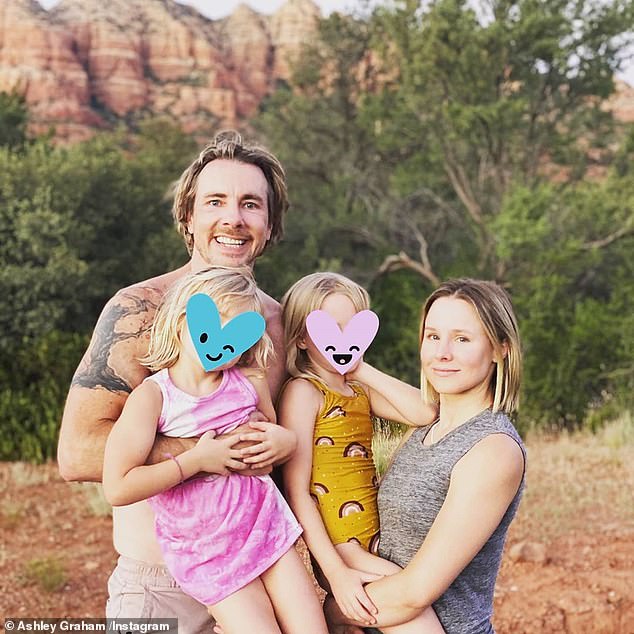 ‘Eight years into sobriety, I had not done a single shady thing,’ he recalled of that year. ‘I hadn’t done anything gray.’

It was a difficult time for Shepard, he had been visiting his father who was undergoing cancer treatment in hospital. He also suffered a motorcycle accident on his way to the Parenthood set.

‘I immediately called my sponsor, and I said, “I’m in a ton of pain and I gotta work all day. And we have friends that have Vicodin,”‘ Shepard recalled.

The CHiPs star said he followed the advice but at one point he had to travel, without wife Kristen Bell, to see his dad.

Without his pills, Shepard says he ended up taking some Percocet – double the dose he would take of his usual pills – after giving his sick father a dose.

‘You know, we had so little in common and so much f**king friction,’ Shepard remembered. 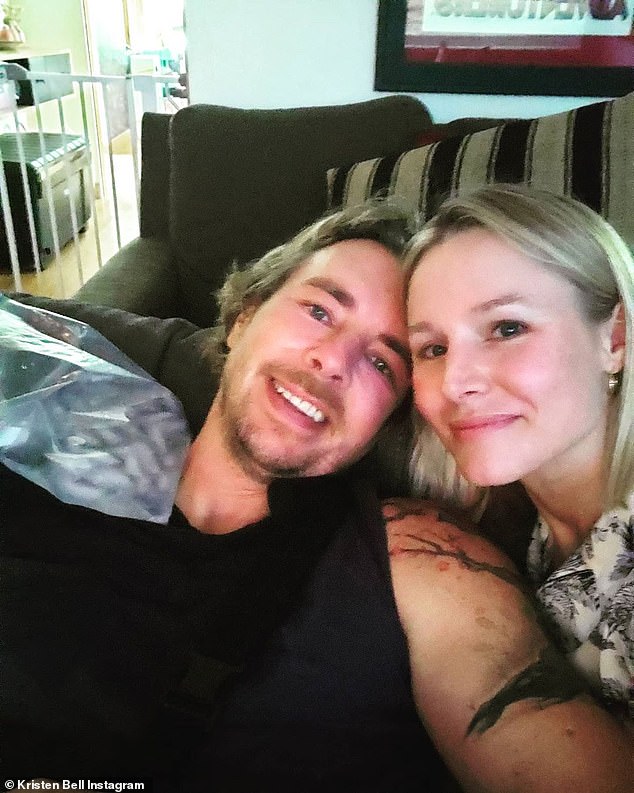 Ouch! Shepard was recovering from a serious motorcycle crash which left him with four broken ribs in August

‘But the no. 1 thing we had in common was we were both f**king addicts and we had never used anything together. And we sat there stoned and looked at the lake. And in that moment, I felt elation and I was just happy.’

On September 1 the Bless This Mess actor’s family rallied around him as he marked 16 years sober.

Bell took to Instagram to praise her other half for his hard work and dedication.

The Good Place star, 40, wasn’t the only one giving Shepard congrats, she also shared a precious ‘Happy Sobriety Birthday’ card one of their daughters made for their dad in the post.

‘Happy Sobriety Birthday Dady,’ their youngster scrawled in red marker. On the back she added the Harry Potter character Ron Weasley and a red heart-shaped balloon.

Bell – who has been married to Shepard since 2013 – didn’t say whether daughter Delta, five, or Lincoln, seven, was responsible for the sweet note.

She joined in the praise in her caption, writing: ‘Today is my husband’s 16th sobriety birthday. My daughter woke him up with this sign, and a sketch of the one and only Ronald Weasley(absolutely random, and also perfect).’

‘Happy birthday Daxy. Thank you for dedicating your life to the hard and wonderful work of sobriety, so that we could share it with you.’ 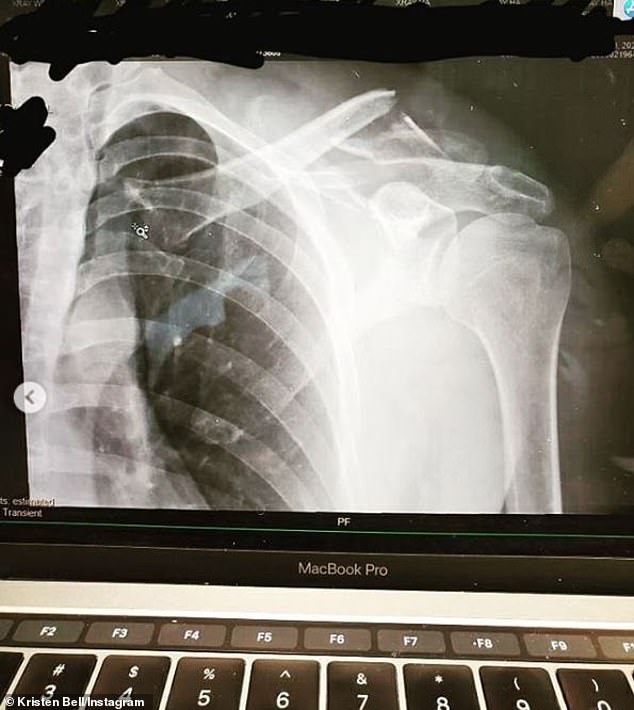