CHRISTOPHER STEVENS reviews the weekend TV: Testing your survival skills in the wilds of Alaska gets a bit grizzly

The Trial Of Christine Keeler

Wanted, young newlyweds to abandon their lives in the UK for the untamed west coast of North America. Must look good on camera.

The mountaintop house in Win The Wilderness: Alaska (BBC2) might be the perfect retreat for any couple desperate to escape the paparazzi. Lurking photographers will be torn to shreds by bears.

Duane and Rena Ose felled 2,000 spruce trees to build this wooden palace, 1,205ft above sea level and close to the Arctic Circle in the USA’s most northerly state.

They’ve been there 30 years since Duane first staked his claim. It’s a magnificent piece of architecture, the size of a hotel, with its own airstrip. Honestly, it’s perfect for you-know-who. 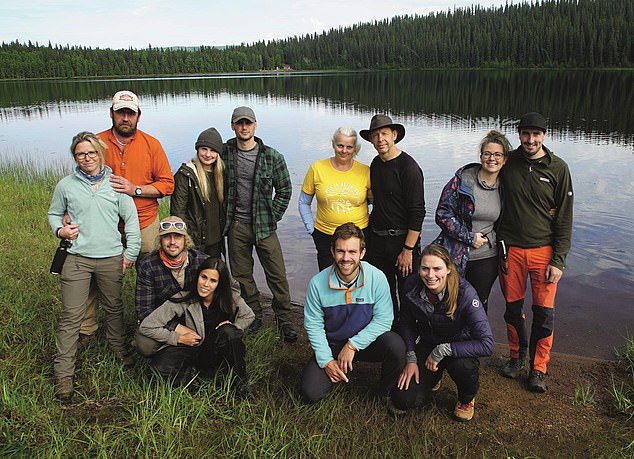 Six British couples will test their survival skills, living rough in the biggest state in the US in a bid to win a mountaintop house in Win The Wilderness: Alaska

But Duane and Rena are in their 70s and want to hand their masterpiece on to the next generation of pioneers before the hardships of Alaskan life get too much for them.

So they’ve invited six British couples to test their survival skills, living rough in the Biggest State in the Union. Likely prospects are invited to have dinner with the old prospectors. At the end of the six week series, Duane and Rena will choose their own successors.

It’s a novel twist on the reality show — and, for a generation struggling to get their feet on the housing ladder, a tempting challenge. All they have to do, to own their own home, is swim across a freezing lake and maybe wrestle a cougar. That’s easier than getting a mortgage these days.

The show was full of handy tips: for instance, if a black bear attacks you, it wants to eat you. A grizzly, on the other hand, will want to rip your head off to protect its territory. That won’t help you to survive but it’s interesting to know.

I don’t suppose Duane and Rena are giving the place away for nothing. They’d have to be soft in the head, and there was nothing soft about those two.

Slogan of the weekend:

The ATS girls’ or women’s infantry in World War II had a motto, Tony Robinson revealed in his History Of Britain (C5). ‘Beauty is a duty too,’ they said, applying powder and paint for Saturday dances. Old Adolf never stood a chance.

The money might not be hard to find but worthy winners will be. RAF engineer Matt and his accountant wife Rachel were the first duo to be invited up to Ose Mountain for a look-see. The young couple seemed strong candidates until Matt mentioned his love of travelling.

Duane’s face turned to thunder. He and Rena clearly don’t approve of globe-trotting. ‘You don’t want to leave it for the bears to chew up,’ he growled.

The bears chewed up Christine Keeler, at the sad and tawdry end of the Profumo Affair. Police, politicians, her own relatives and former friends — they all took a bite.

Sophie Cookson has emphasised the wretchedness of the central figure throughout The Trial Of Christine Keeler (BBC1), never seeking to glamorise. Paul Ritter, with a tour-de-force speech as her barrister, summed up the truth: she was abused and exploited by everyone she met, and probably couldn’t imagine any other kind of relationship. With the charismatic Stephen Ward (James Norton) dead and Christine condemned to prison, this was a depressing end to a sordid business.

Writer Amanda Coe, who resisted preaching for so long, couldn’t help adding a dreadful and implausible scene between Profumo and wife (Ben Miles and Emilia Fox), as they debated women’s sexual rights in the language of millennials.

The flashbacks and timeslips didn’t relent either. I’d love to see the whole six hours, edited into chronological order.