The stars dazzled as they kicked off the 2021 Billboard Music Awards in style.

Pink, Alicia Keys, and Saweetie were among the celebrities slaying the red carpet at the Microsoft Theatre in Los Angeles on Sunday.

The superstars brightened up the red carpet in their brightly-hued ensembles, consisting of eye-catching shades of fuchsia, pink, and tangerine orange.

Hitting a fashion high note! Pink, Alicia Keys, and Saweetie were among the celebrities slaying the red carpet as they arrived to the 2021 Billboard Music Awards in Los Angeles on Sunday

Pink, 41, took the plunge in a dazzling fuchsia gown with a matching pair of chandelier style earrings upping the glam factor.

The hit-maker glammed up her ordinarily edgy hairdo with a touch of curls.

She was joined by her two children, Willow, nine, and Jameson, four, who were both looking cool in their own red carpet-ready looks. 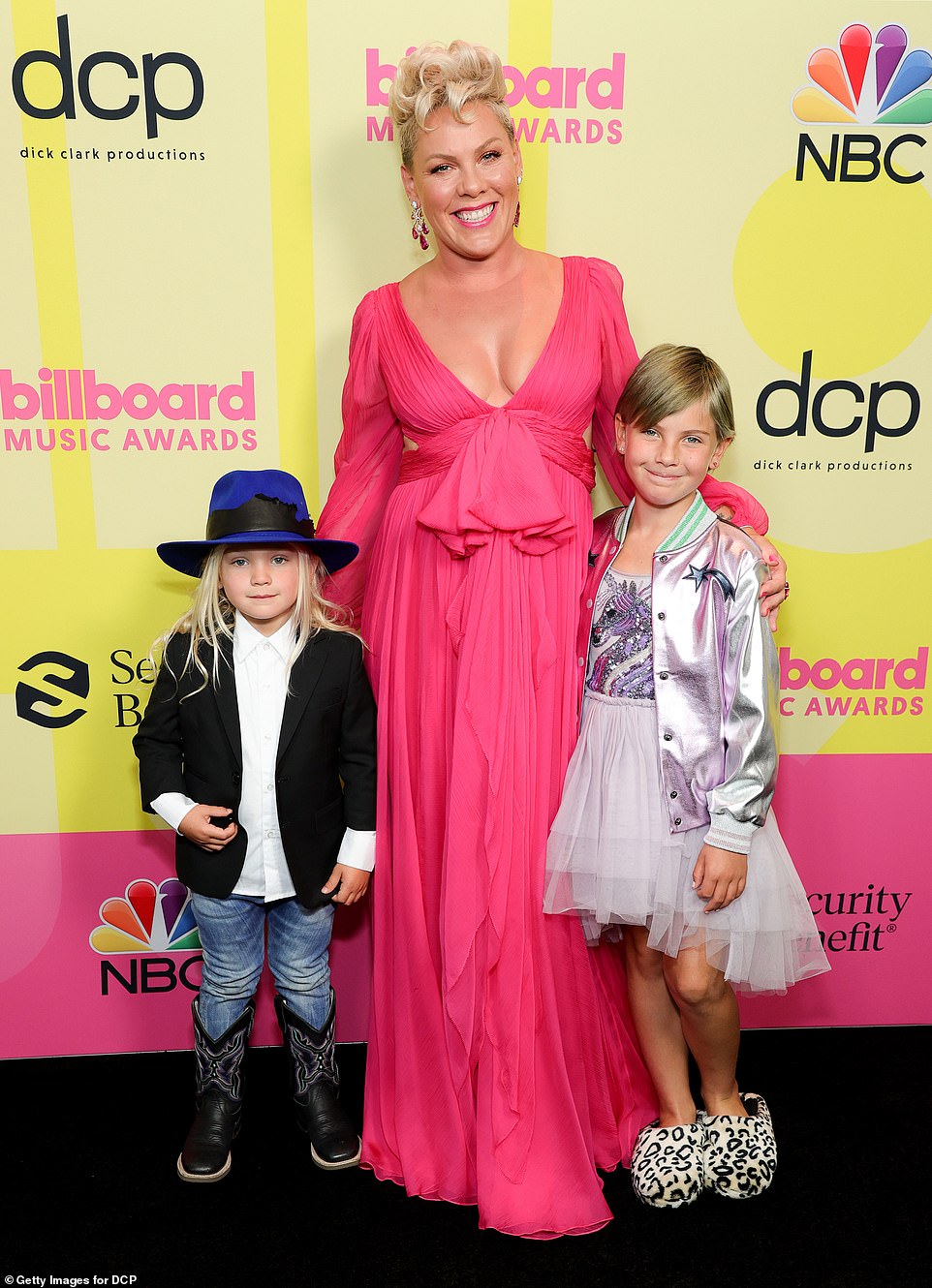 Family affair! She was joined by her two children, Willow, nine, and Jameson, four, who were both looking cool in their own red carpet-ready looks 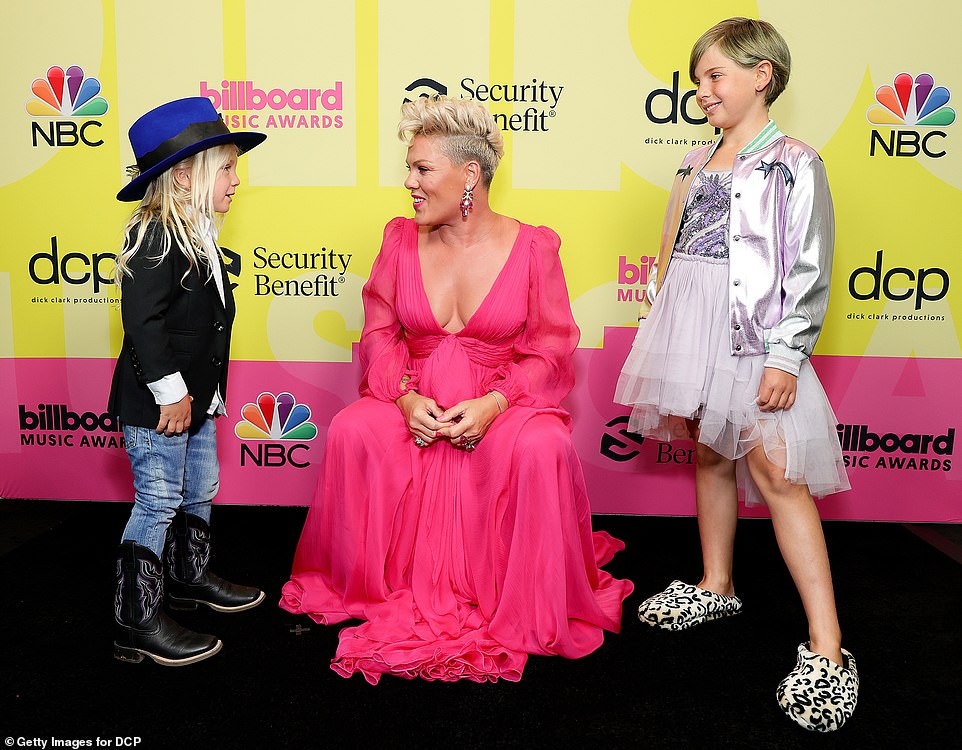 Super glamorous: Pink took the plunge in a dazzling fuchsia gown with a matching pair of chandelier style earrings upping the glam factor 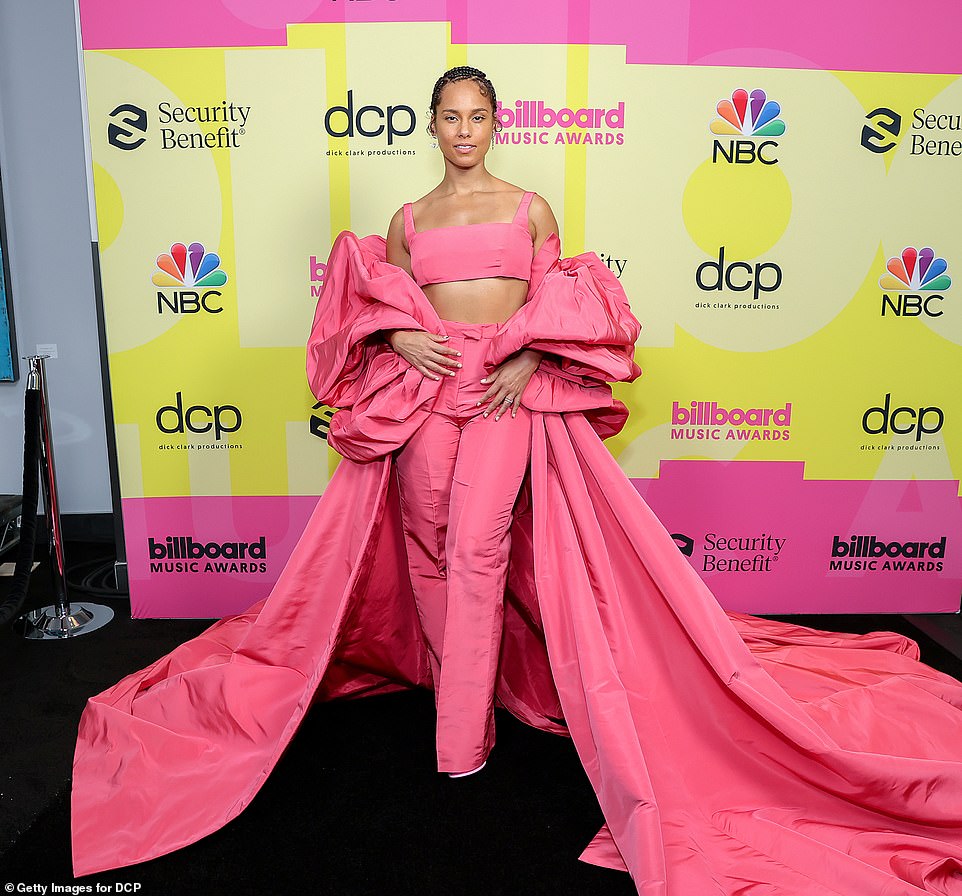 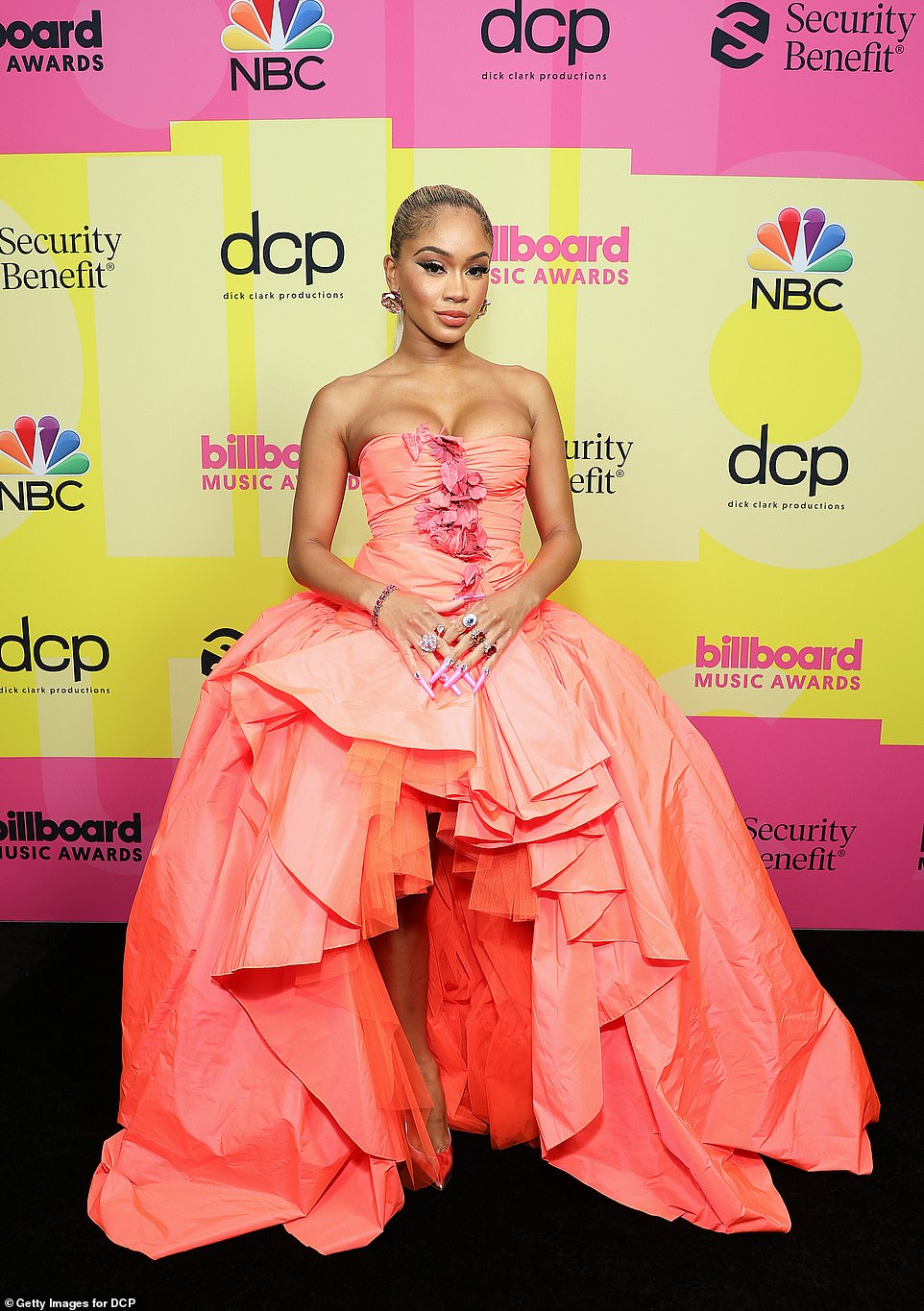 Working it! The Icy Girl singer brightened up the awards show in her juicy-hued look 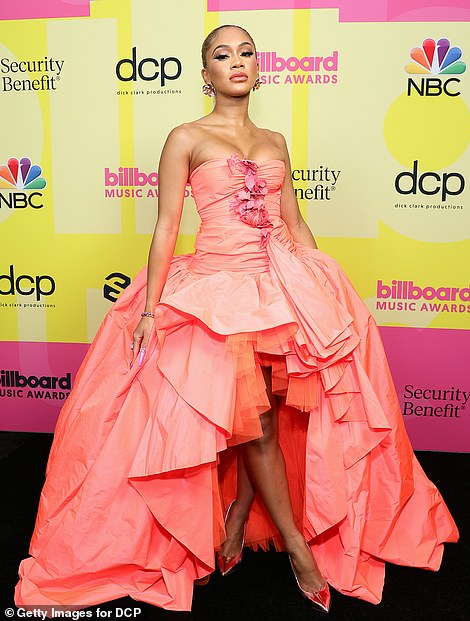 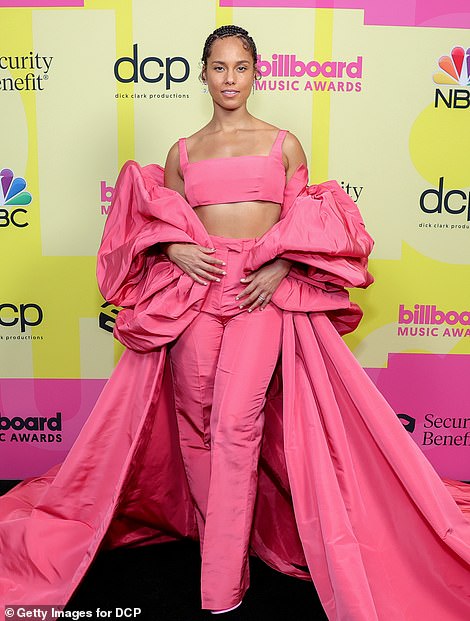 Sunset vibes: The hit-makers got heads turning in their beautiful attire

With her beautiful complexion accented with a natural hue of makeup, the Fallin’ singer was a sight to behold as she made her grand entrance.

Also putting on head-turning display was My Type singer Saweetie, 27, who flashed her cleavage in a princess-style gown adorned with a floral design and tulle skirt. 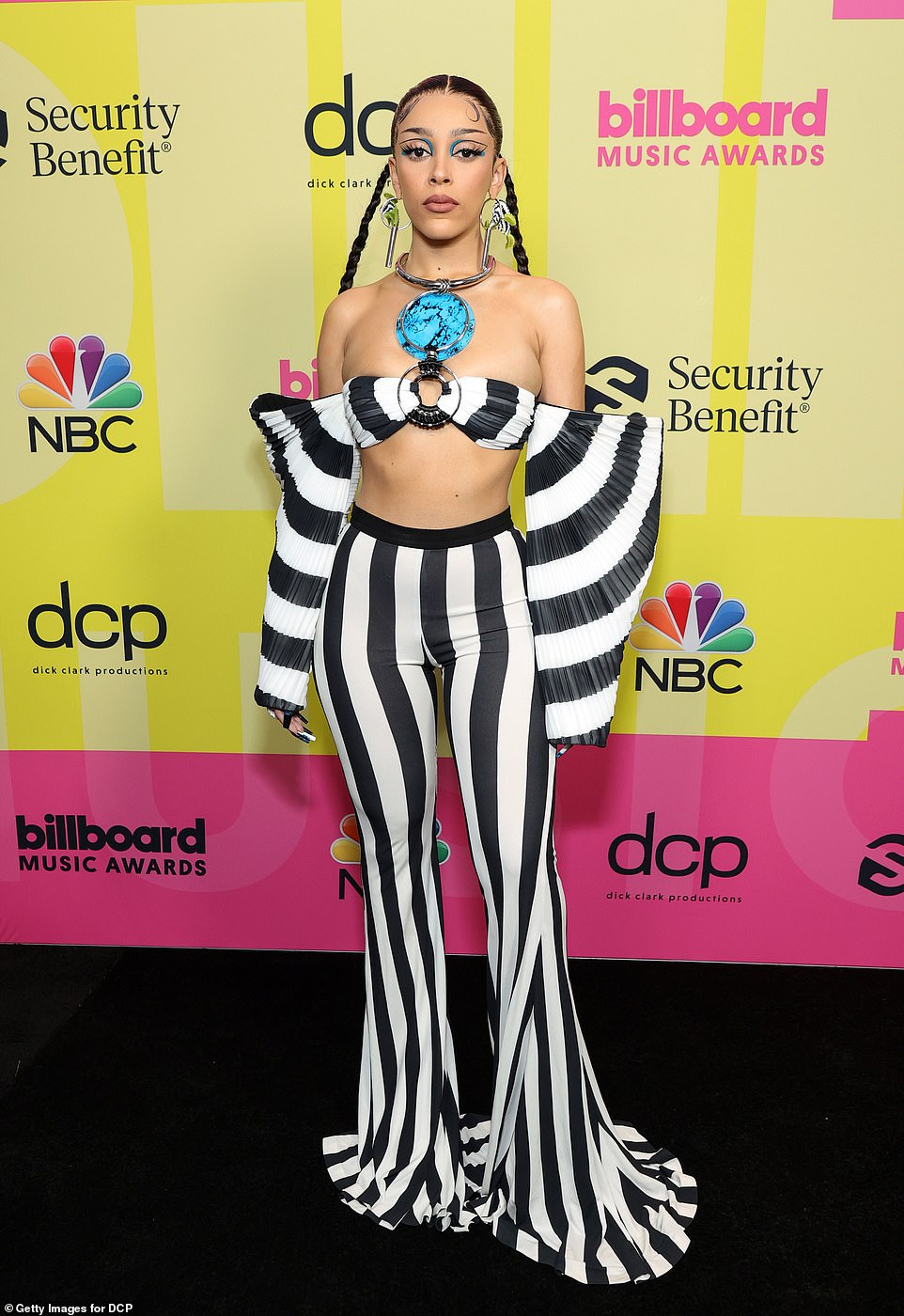 Stars in stripes! Doja Cat put on a traffic-stopping display in a black-and-white crop top, billowing sleeves, and flared leggings 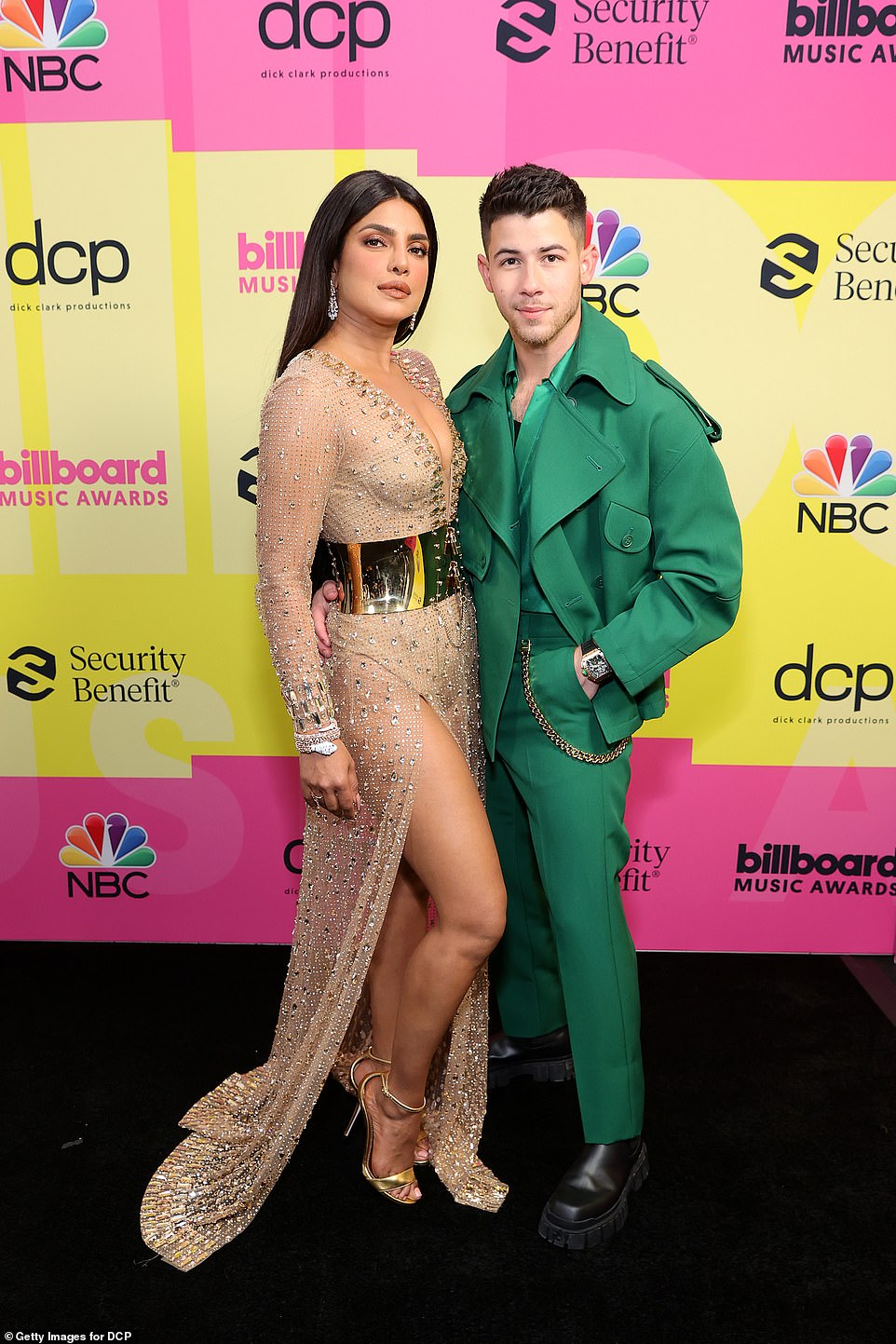 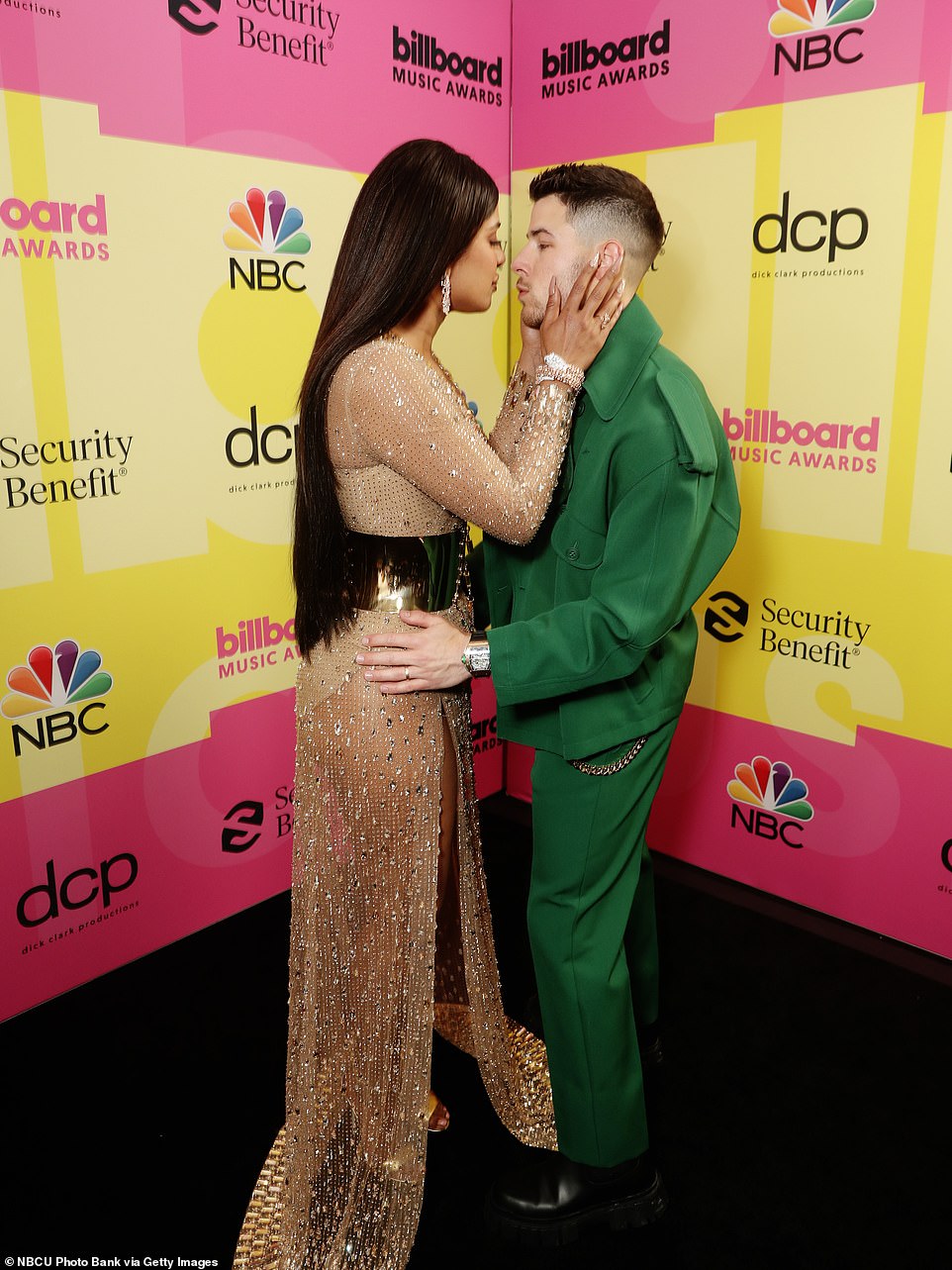 XOXO: The power couple did not let the spotlight stop them from showering each other with affection

It will only be a matter of time before the superstars are gathered inside for another action-packed night of music.

Despite his recently injury, Nick Jonas will be hosting duties the 2021 Billboard Music Awards, live from the Microsoft Theater, Los Angeles, CA on Sunday. 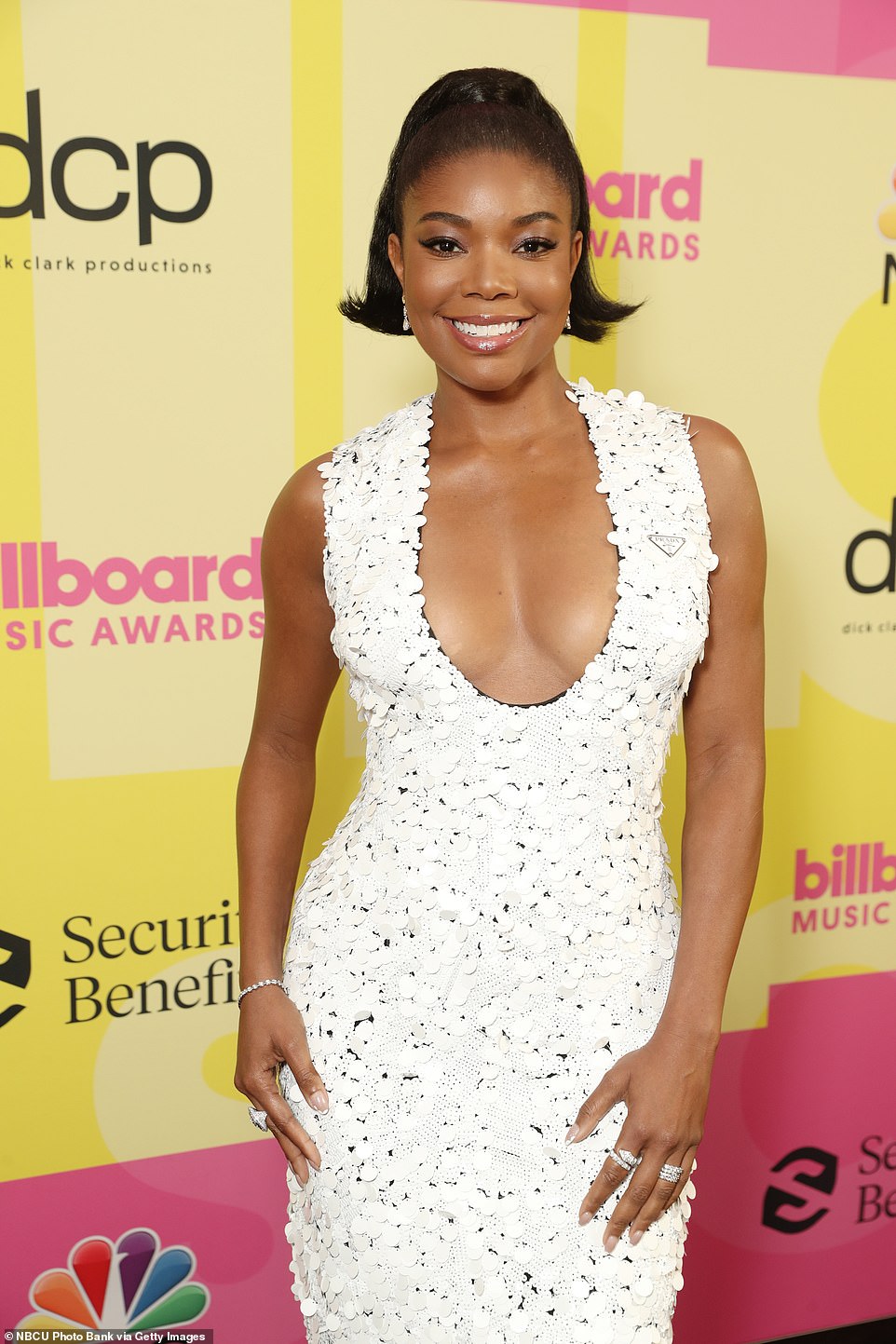 Taking the plunge! Union flashed some cleavage in her low-cut Prada frock 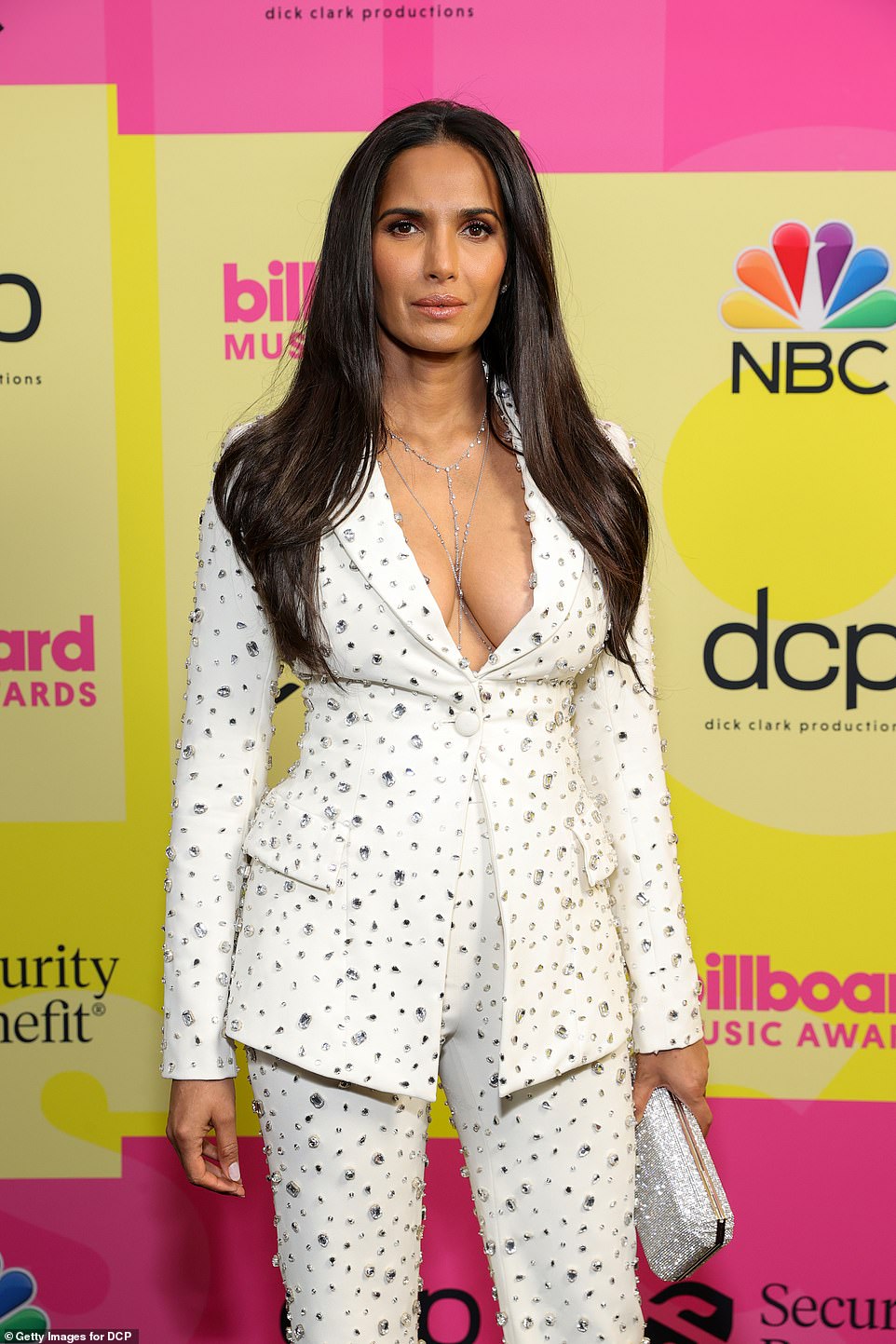 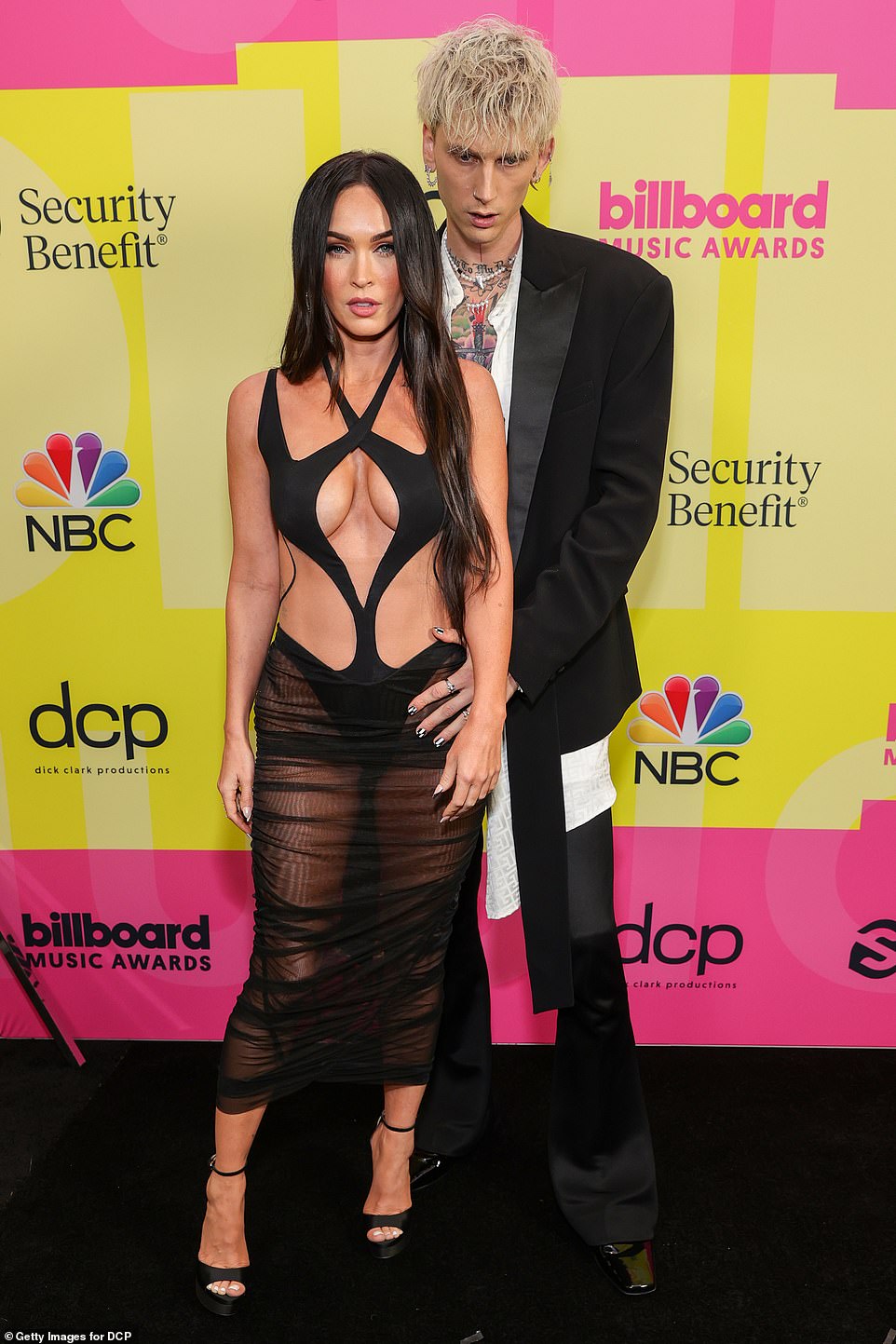 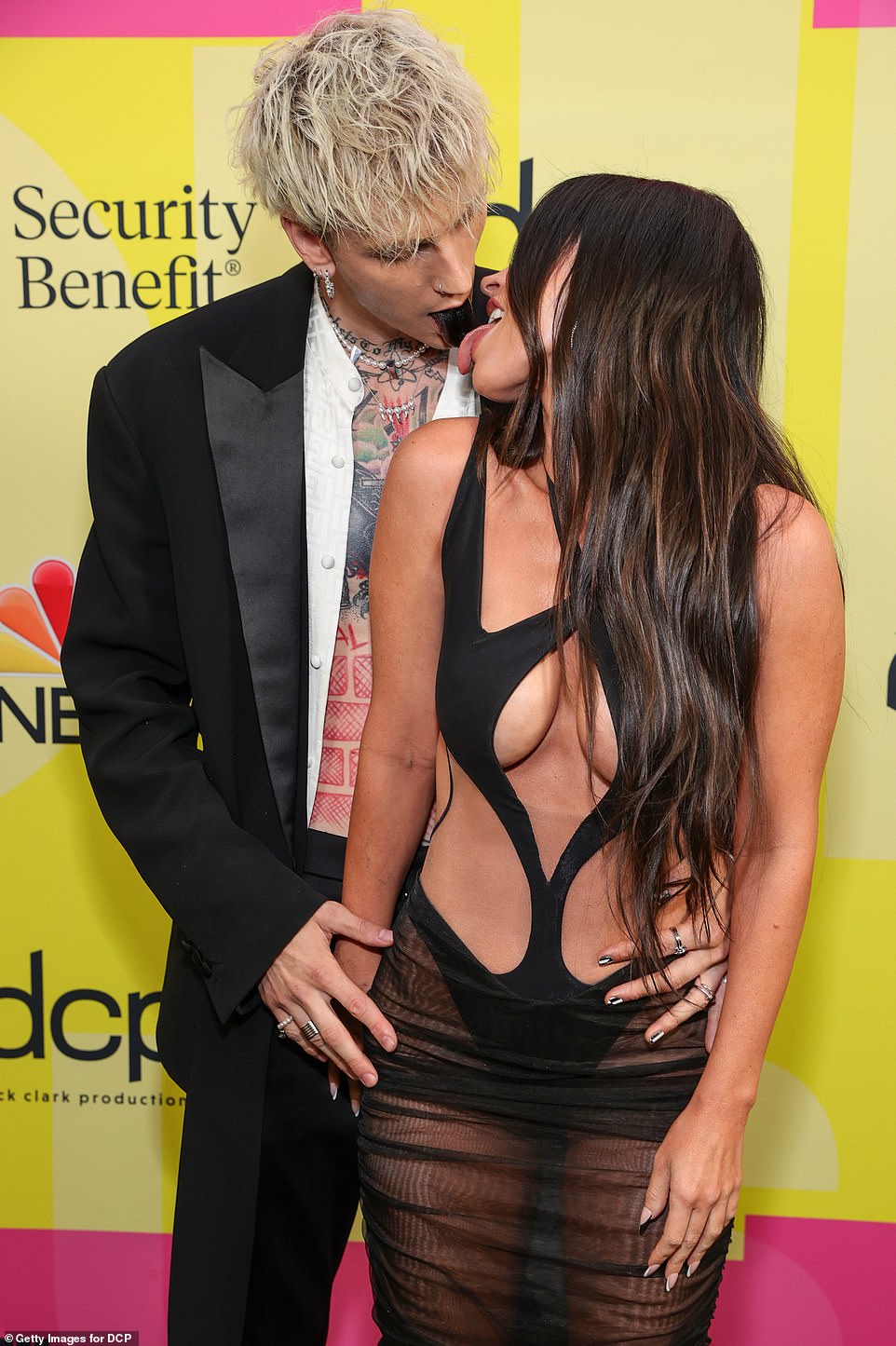 Packing on the PDA: The rapper put his black tongue on display as he showed his girlfriend some love 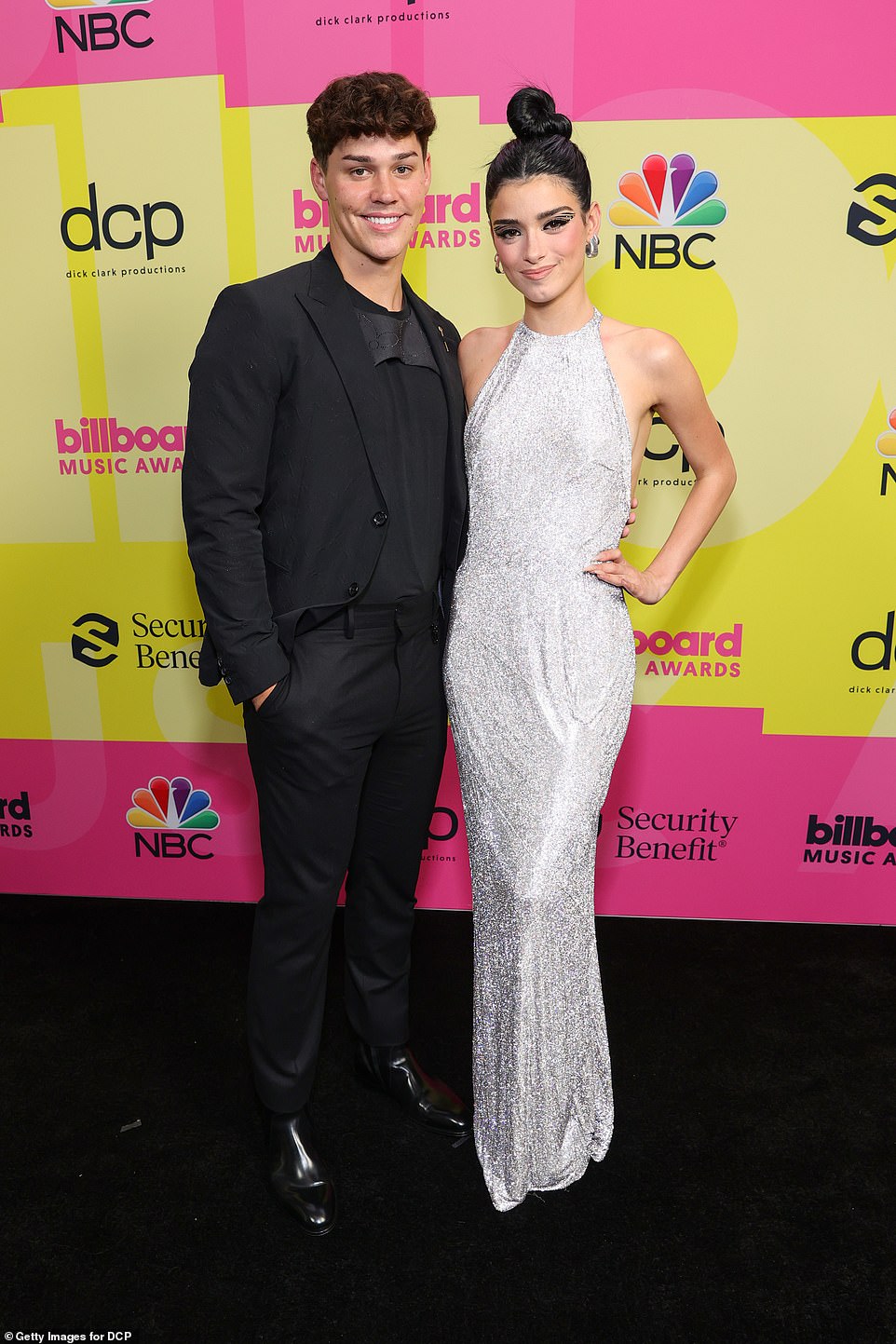 Sparkle and shine! Dixie D’Amelio stole the show in her glittering metallic number as she posed with boyfriend Noah Beck 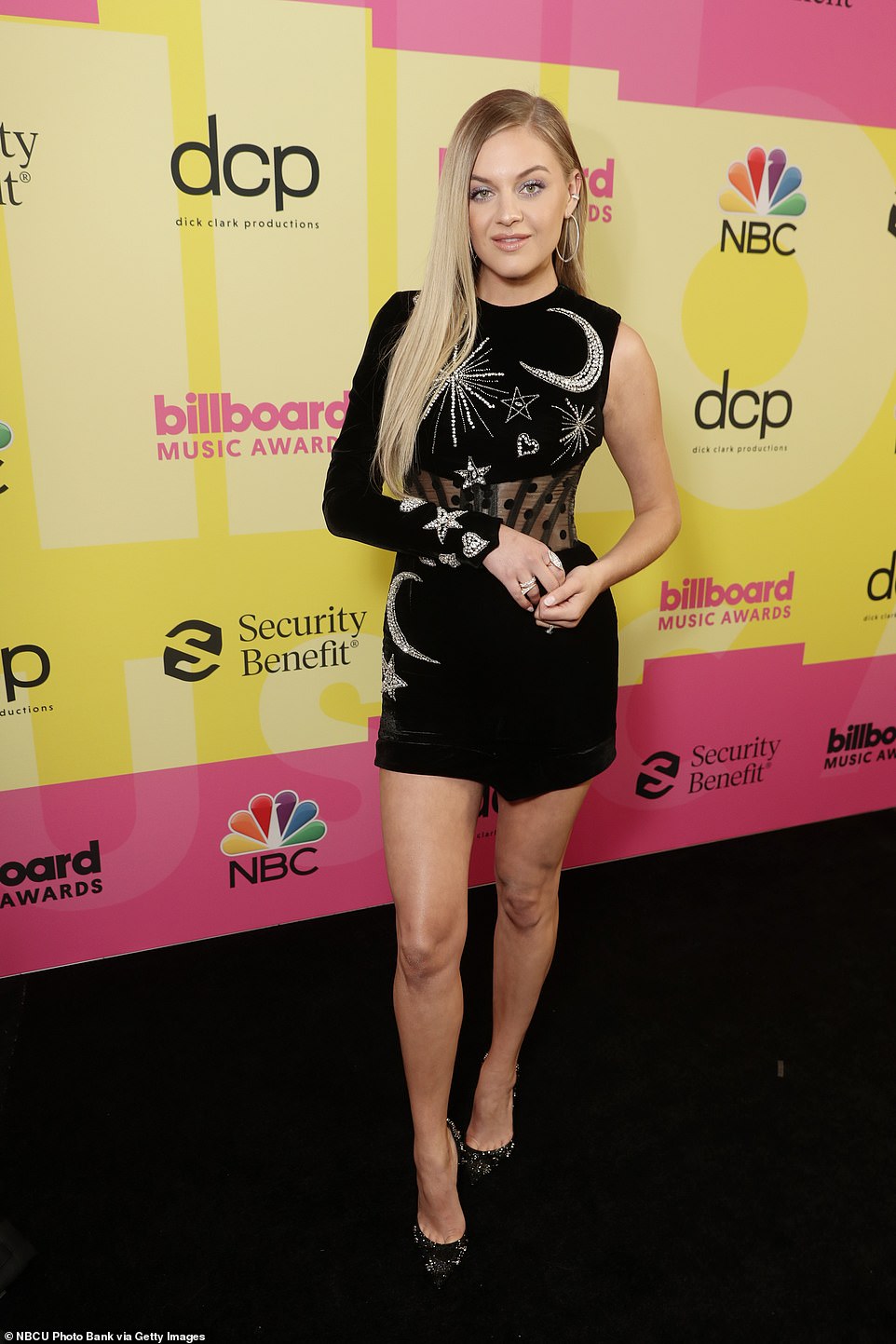 Looking out of this world! Kelsea Ballerini put on a very leggy display in a revealing LBD designed with stars and crescent moons

All that glitters! H.E.R., Renée Elise Goldsberry, and Karol G lit up the red carpet in their sparkling ensembles

It’s the first time the 28-year-old singer and actor has hosted the show.

Billboard said in a statement earlier this month: ‘This is Jonas’ first time as host of the Billboard Music Awards, which is two years older than he is. (He’s 28; the show launched 30 years ago).’

‘But he’s had lots of awards show experience, including teaming with his wife, Priyanka Chopra Jonas, to announce this year’s Oscar nominations.’

Nick – who is taking over from Kelly Clarkson as presenter – joked: ‘Truly an honor to have already received the first preemptive 2021 #BBMAs award. Best host ever?! Wow! Tune-in May 23rd at 8pm ET/5pm PT on @NBC.’ 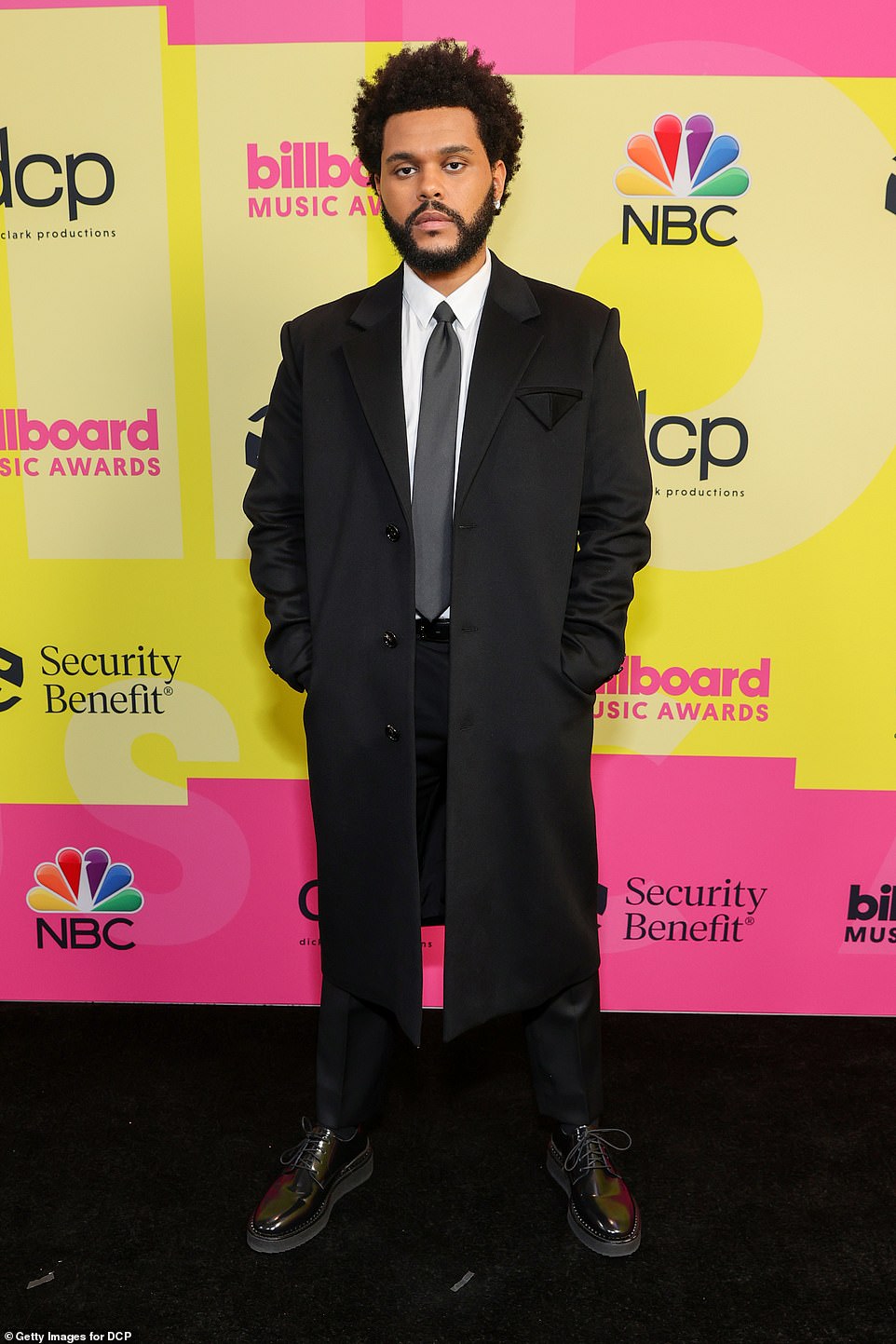 Ready for The Weeknd! Music sensation The Weeknd looked ready for business in his suit and tie

Making them green with envy! Nick Jonas and Lena Waithe hit the show in various shades of green 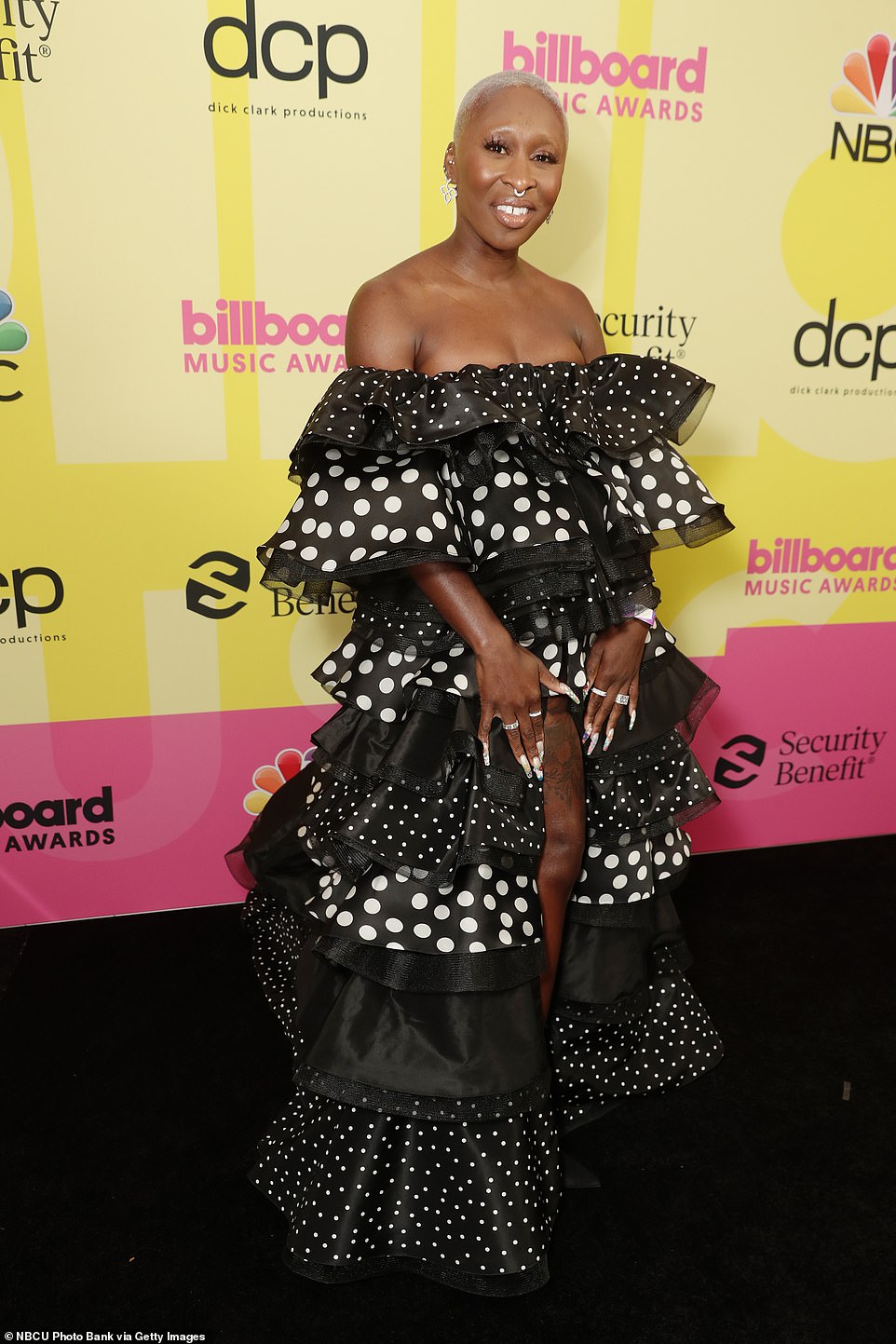 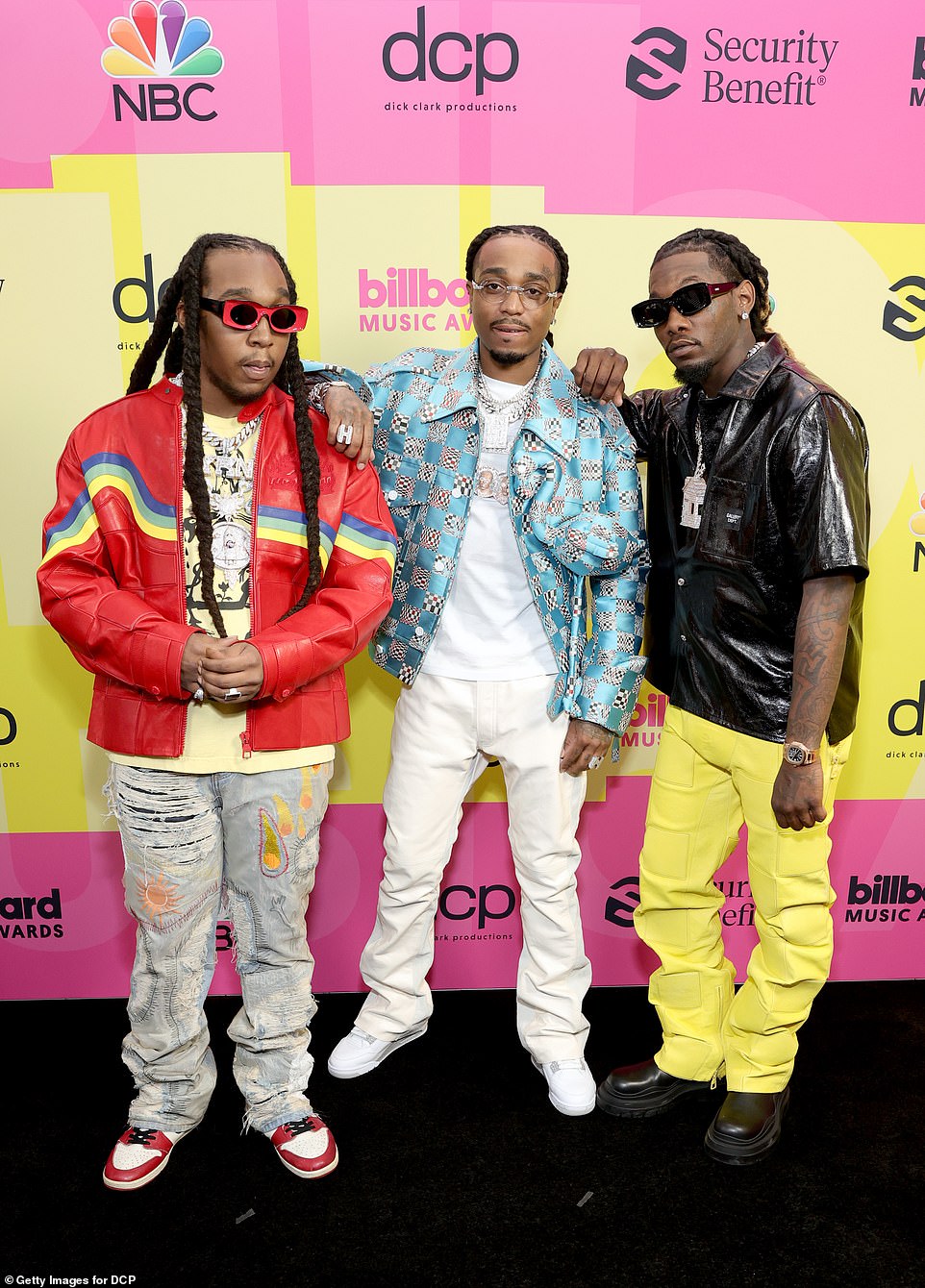 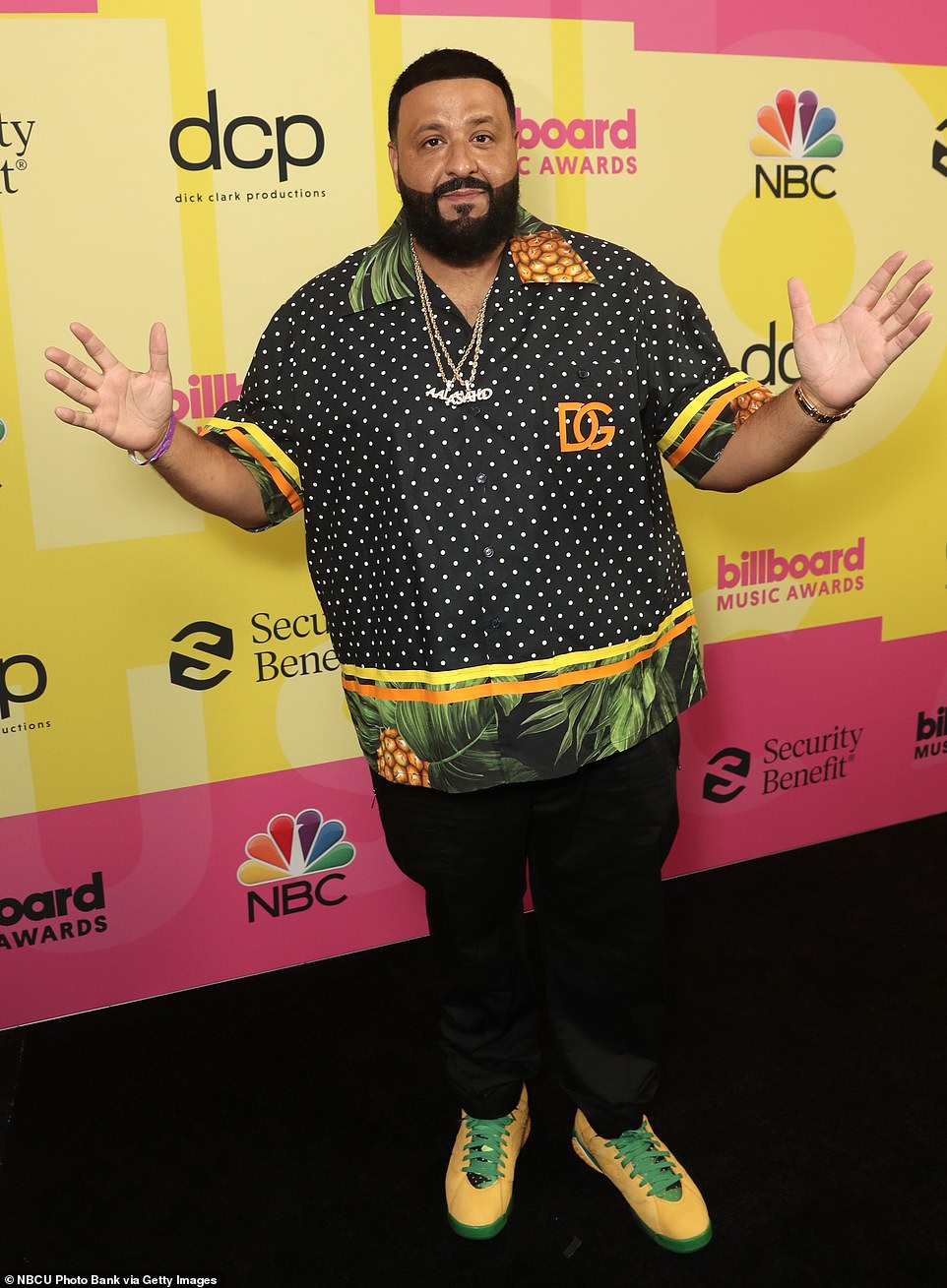 Spot on! DJ Khaled kept his cool in a polka dot shirt, black trousers, and green and yellow sneakers 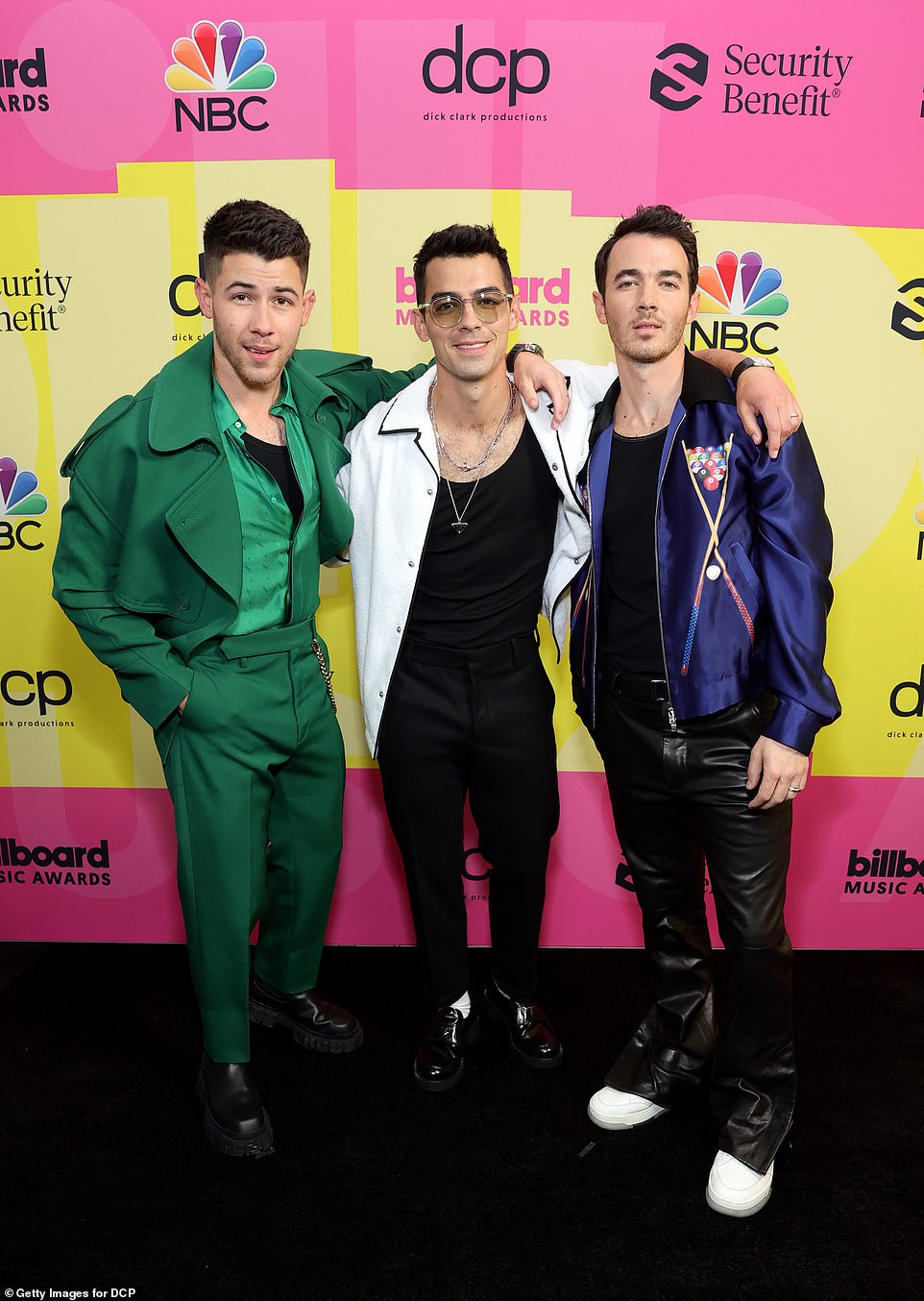 Brotherly love! Nick, Joe, and Kevin Jonas of the Jonas Brothers struck a pose on the red carpet 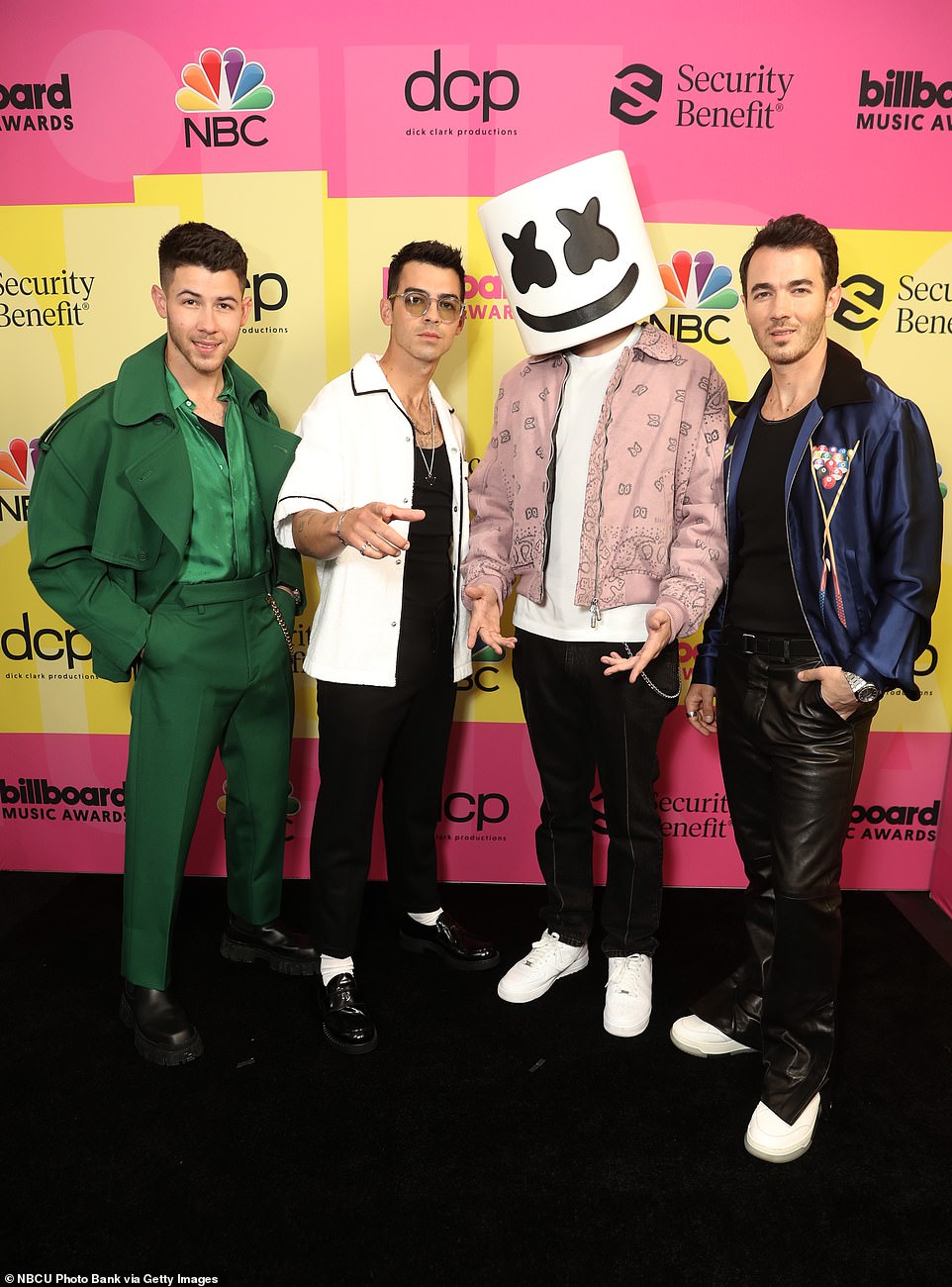 Music makers! The trio shared the spotlight with Marshmellow, whom they collaborated with on their new single Leave Before You Love Me

The Save Your Tears hitmaker’s acclaimed album After Hours – which was snubbed at the Grammys – is in contention for Top Billboard 200 Album and Top R&B Album.

The 31-year-old megastar is also up for Top Male Artist, Top R&B Artist, and Top Hot 100 song for Blinding Lights. DaBaby is up for 11 prizes and Pop Smoke has posthumously received 10 nominations. 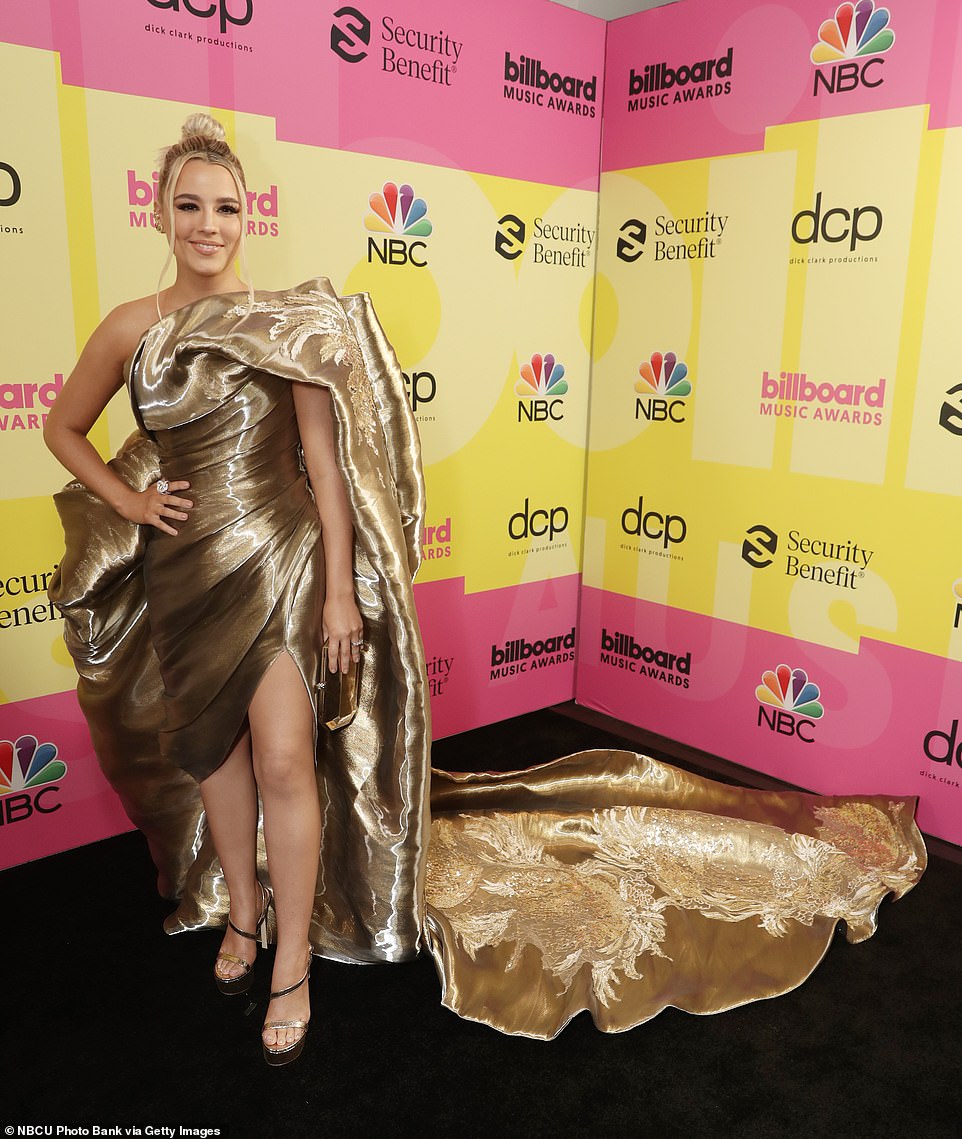 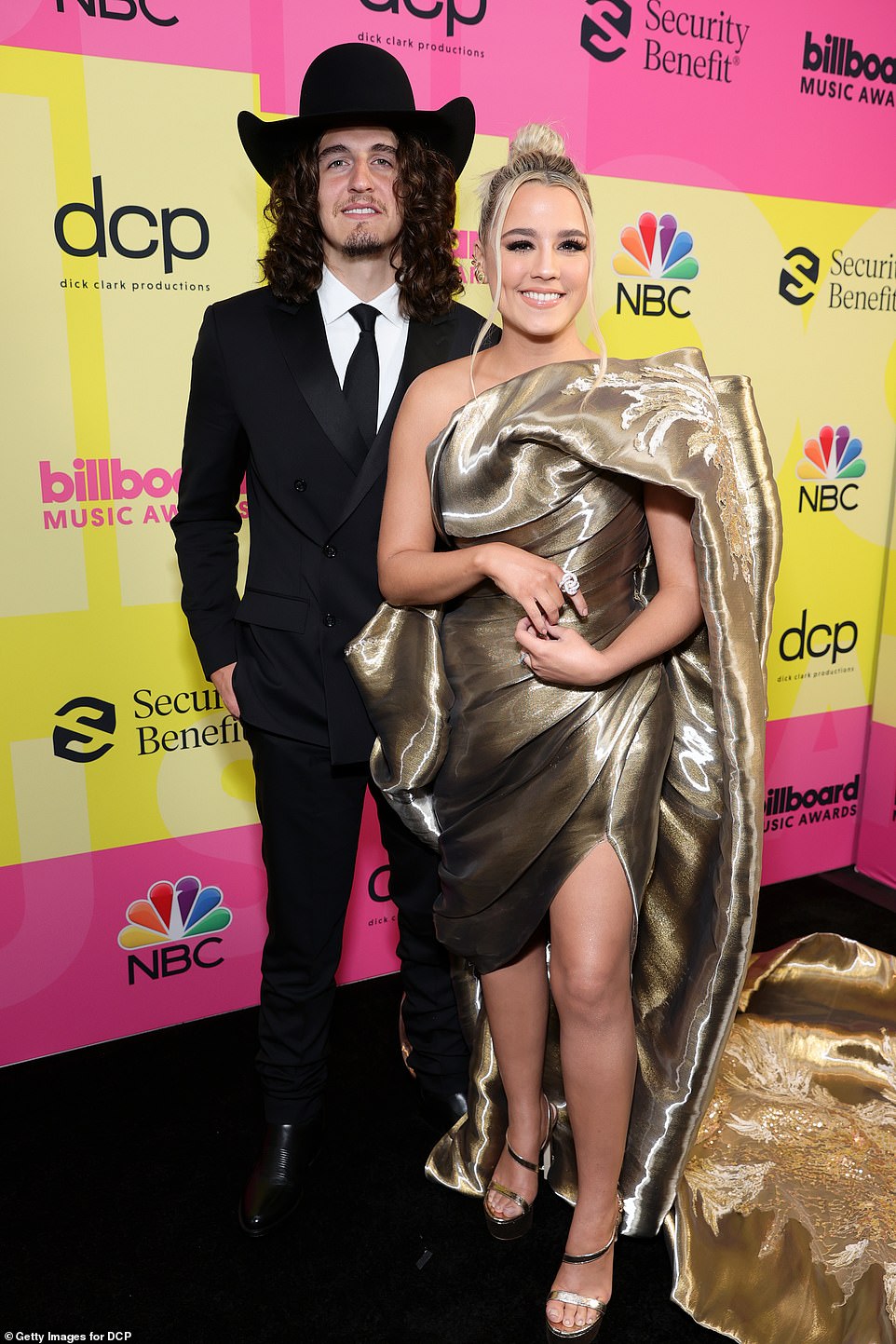 It takes two! The singer was joined by her husband, Cade Foehner 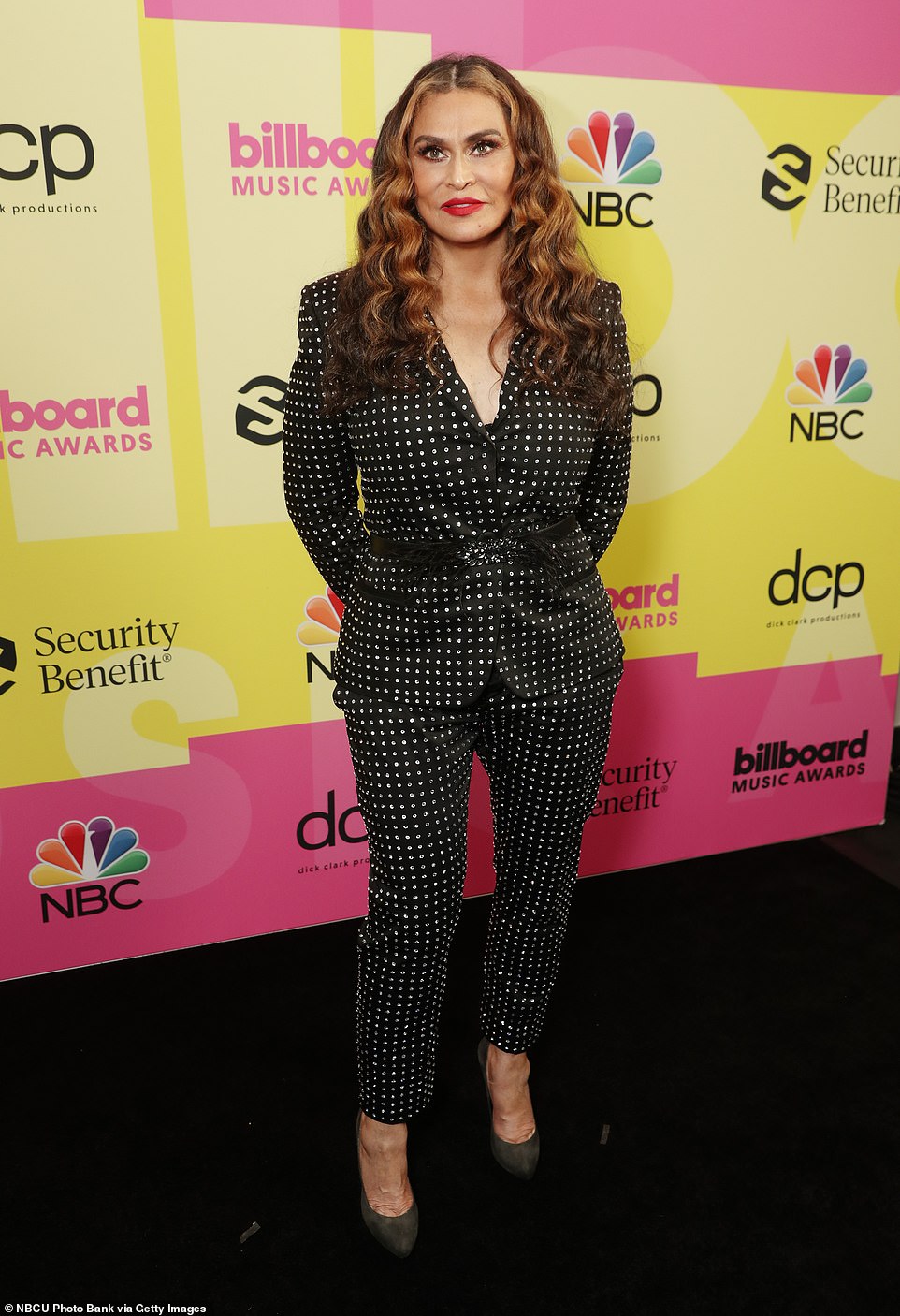 It goes with everything! Kathryn Hahn topped off her chic white tank with an equally stylish black blazer 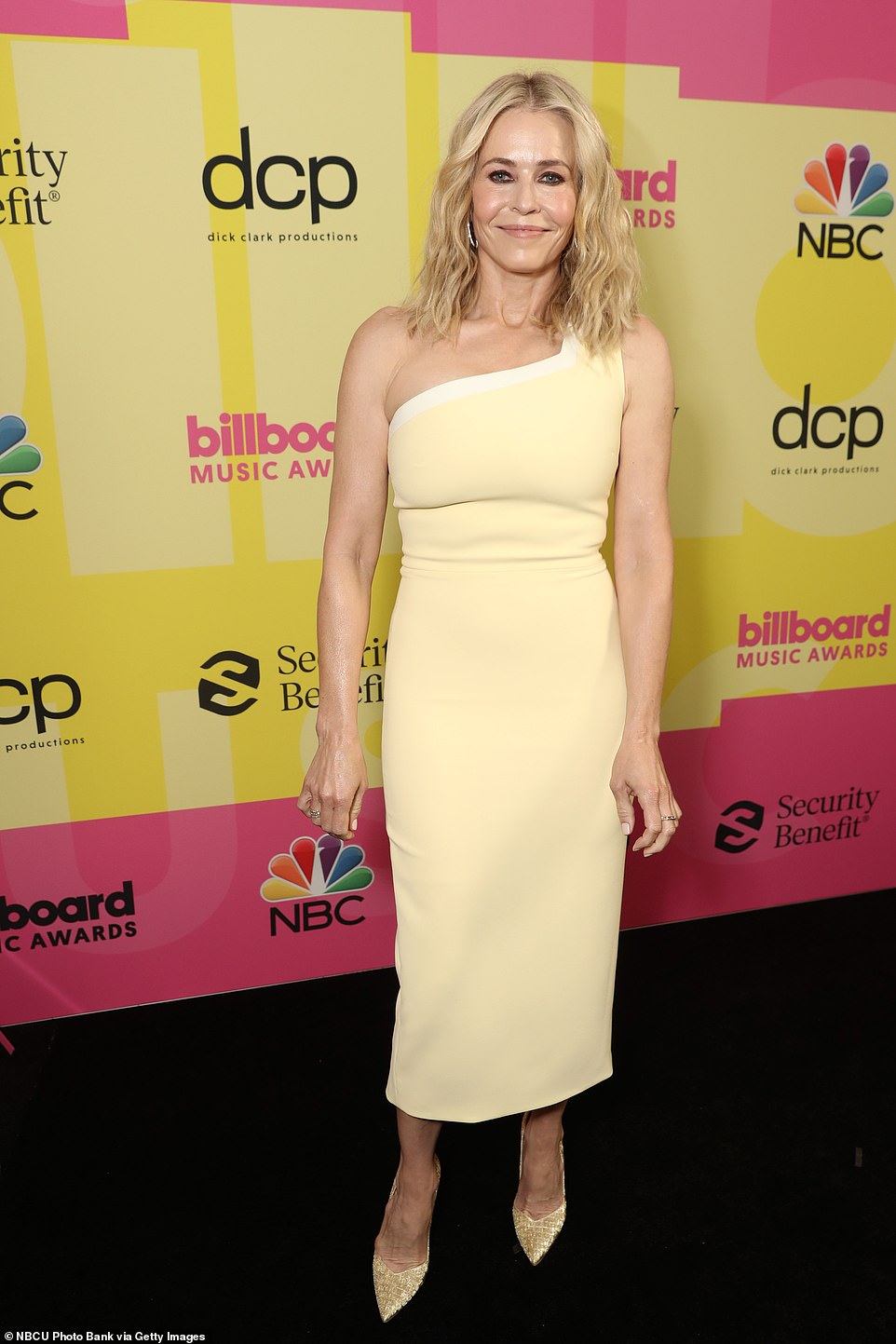 Hello sunshine! Chelsea Handler was a vision in a summery yellow dress and gold heels 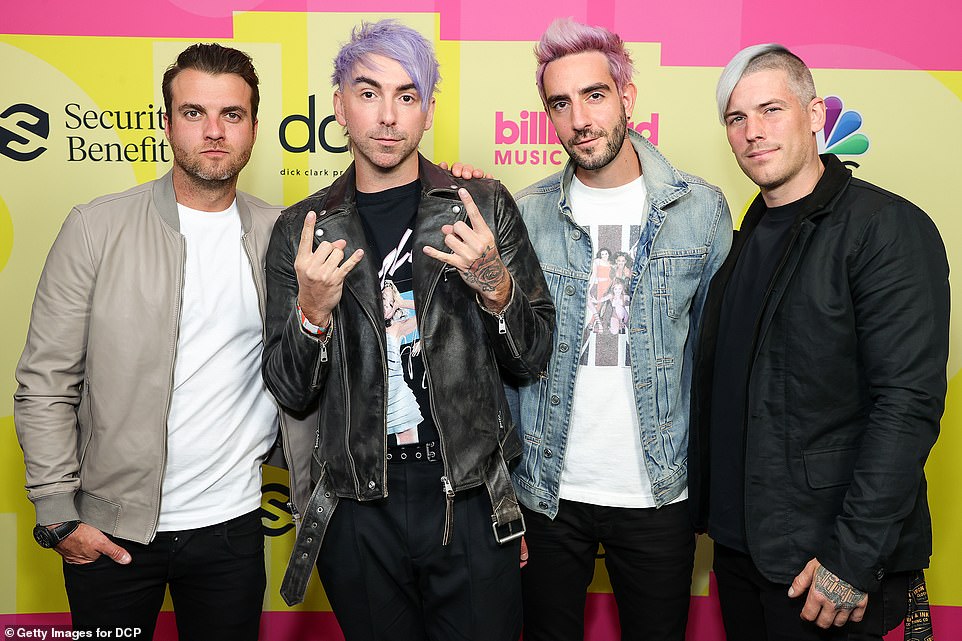 The Hot Girl Summer hitmaker will go up against herself in the two categories, as her Cardi B collaboration ‘WAP’ is also nominated for the two awards.

Taylor Swift – who is up for four prizes in total – will go head-to-head with The Weeknd’s After Hours Lil Baby’s My Turn and the late Juice WRLD’s Legends Never Die for Top Billboard 200 Album.

And the coveted Top Artist prize will either go to Drake, Juice WRLD, Pop Smoke, Taylor Swift or The Weeknd. 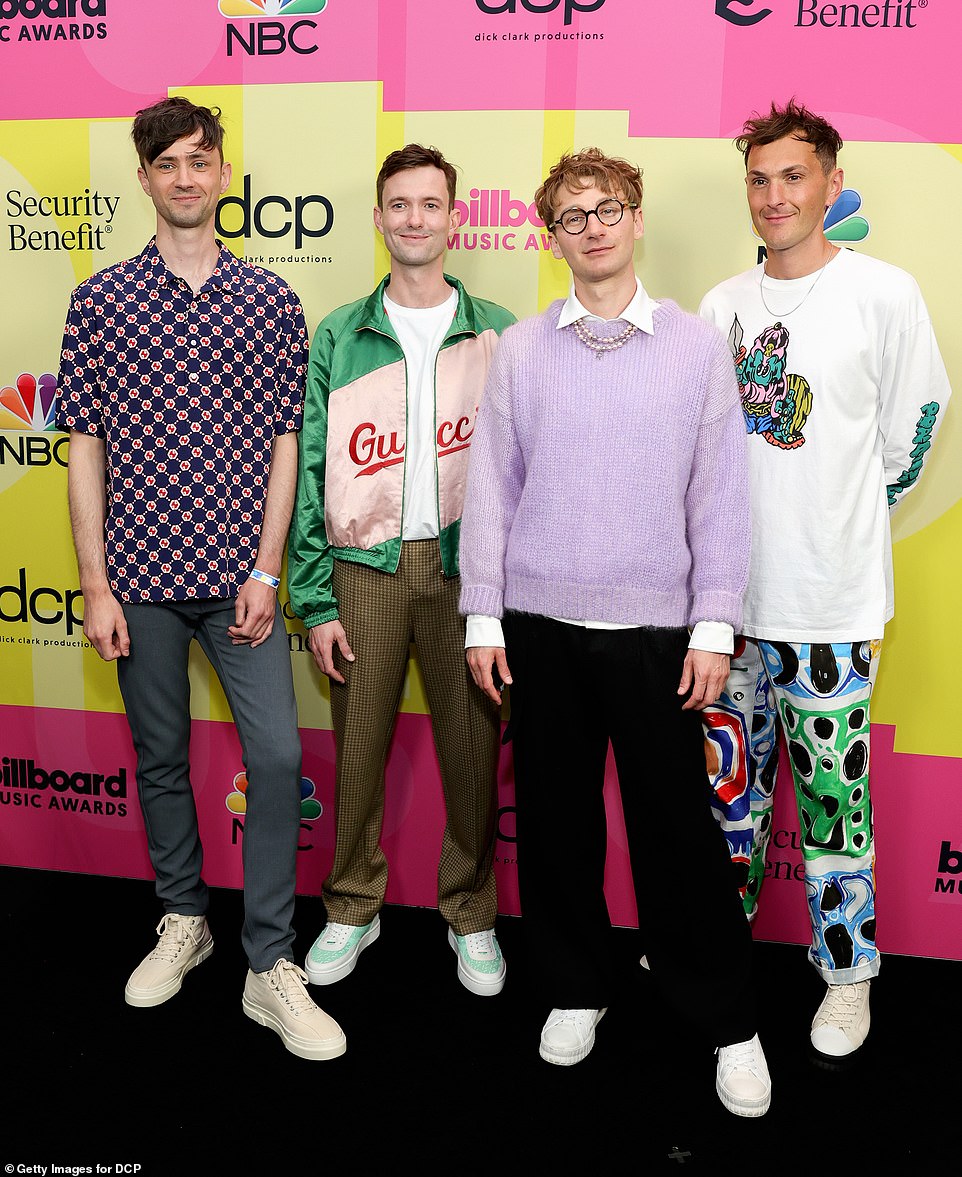 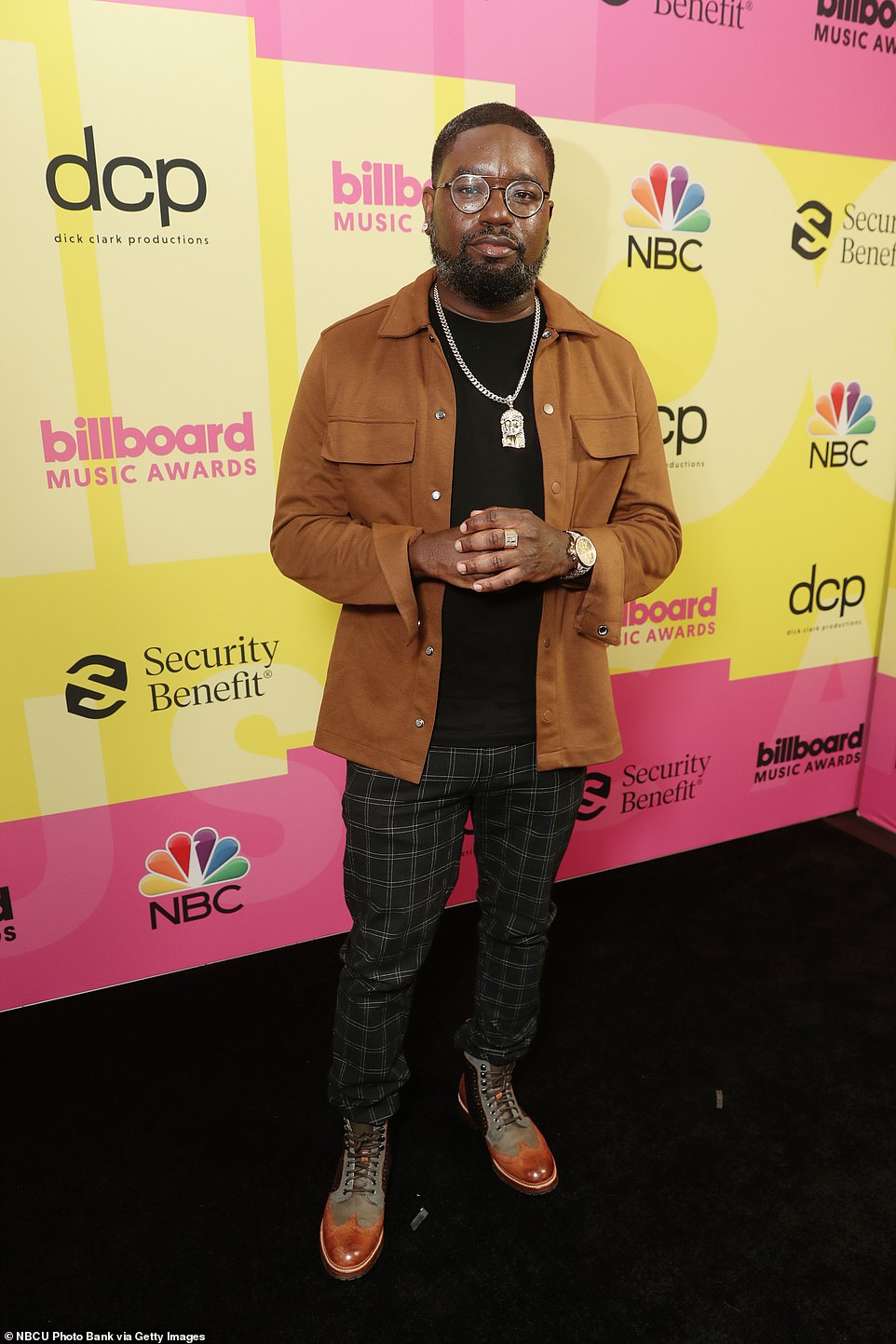 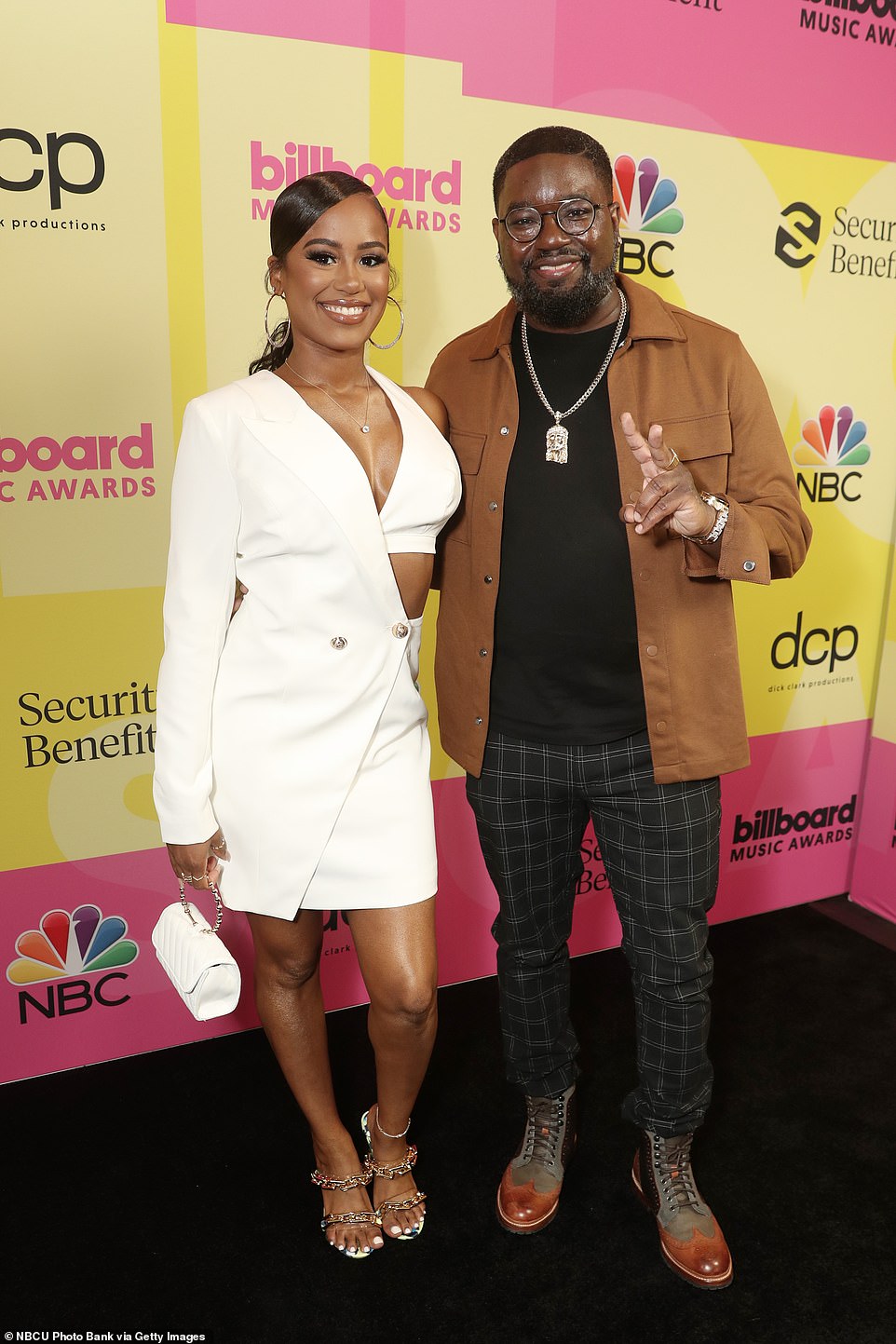 Pop Smoke ‘Shoot for the Stars, Aim for the Moon’

The Weeknd ‘After Hours’

Kehlani ‘It Was Good Until It Wasn’t’

The Weeknd ‘After Hours’ — WINNER

DaBaby ‘Blame It On the Baby’

Pop Smoke ‘Shoot for the Stars, Aim for the Moon’ — WINNER

Bruce Springsteen ‘Letter to You’

We The Kingdom ‘Holy Water’

Koryn Hawthorne ‘I AM’

Jason Aldean ‘Got What I Got’

Lee Brice ‘One of Them Girls’

Morgan Wallen ‘More Than My Hometown’

twenty one pilots ‘Level of Concern’

Koryn Hawthorne ‘Speak To Me’

Marvin Sapp ‘Thank You For It All’

Tye Tribbett ‘We Gon’ Be Alright’