In January 2010, I got my first tattoo. I was in Amsterdam following my final semester of university. I stumbled into a tattoo parlour, hungover, and explained I wanted a kite tattooed on my ribs. A release form and 100 euros later, it was done.

Glad-wrapped and ecstatic with my decision, I started thinking about all the terrible jokes I could make about being high as a kite as Amsterdam when I got home. 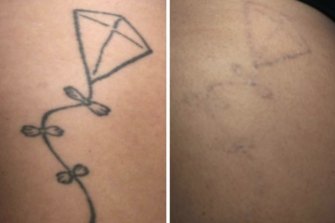 Before and after the seventh treatment.Credit:Aimie Rigas

As you can see, some parts are completely gone, like the tail end of my tattoo. And the skin quality is still there. No scarring or pigmentation.

Dr Sundrum says she would rather remove the tattoo slowly with more treatments, than permanently damage the skin (any more than I already had by getting the tattoo in the first place, of course).

You also need to protect the area from sun exposure, which meant a lot of one-pieces for me at the beach. We all know avoiding sun exposure is important for skin health and reducing melanoma risks, but it also affects pigmentation in the area too.

After starting this process in November 2016, I’m yet to have what I’m hoping will be my last treatment. I’ve taken a year off since my last treatment because the tattoo has faded so much that I barely notice it’s there. But it’s important to have realistic expectations about how long it will take before you start.

It will likely cost more than you paid for the tattoo

The cost depends on how many sessions you need. PicoSure tattoo removal, the treatment I had, costs approximately $250 to $300 per session for a tattoo the size of a business card. If it's the size of two business cards, it’s double the price.

“Getting rid of a tattoo with a laser has become easier, but it’s still a very difficult procedure. It requires a few treatments. It’s not this miraculous, magical wand, one treatment and it’s gone,” Dr Sundrum explained to me in one of our sessions.

None of this surprised me. Especially when I remembered the box I ticked when I got the tattoo in the first place: the waiver form said I understood I was "making a permanent change to my body".

It hurts more than getting a tattoo

Having heard inked-up strangers talk about their experience of tattoo removal online, I was expecting it to feel like "flicking an elastic band against my skin". After seven treatments, and counting, I can confidently say this was not the case.

I’d describe it as a burning sensation, like accidentally touching your skin with a hair straightener or iron, which I found far more unpleasant than being tattooed in the first place. The first treatment was the worst of the seven (fear of the unknown and darker pigment to remove played their part).

By the third treatment, I’d tried ice-packs, numbing cream and a local anaesthetic to help ease the pain. If you’re not scared of needles, which I’m assuming is the case for people with tattoos, the local anaesthetic was definitely the best. Sure, you have to endure tiny jabs into your skin as they numb the area, but the treatment itself doesn’t burn.

It is also wise to avoid booking treatments when you have your period. I can’t confirm whether my pain threshold was lower or if I was feeling fragile because that’s what periods do to me, but Dr Sundrum assured me this was common among female patients.

How long is each treatment?

The treatment took less than five minutes on a tattoo the size of mine, which, upon reflection, makes the pain seem less significant. Numbing cream and local anesthetic add to the overall treatment time.

Which laser is best?

This is largely up for debate. I can only talk to Picosure, which Cynosure describes as delivering “ultra-short pulse bursts of energy to the skin in trillionths of a second”. But there are other lasers on the market. Speak with a specialist to discuss which treatment would be most effective on your specific tattoo.

While I’m happy with the results so far and confident the tattoo will be removed completely once I make the time to book in for another treatment, it has made me reconsider going through the process in future.

It’s been three years since I started out on this journey and I’ve started to question whether the tattoo bothered me that much in the first place.

It’s incredible that modern technology can remove something that was supposed to be permanent, but it requires patience. I can’t help but think, if we made it as difficult to get a tattoo as it was to remove one, there’d be a lot fewer "no ragrets" tatts around.