We’ve seen some unusual TikTok trends over the last year – but doctors are warning that this latest one is pretty dangerous.

Barbershop Kapsalon Freedom, based in the Netherlands, has gained millions of fans by sharing videos of people having hot resin pour over their entire faces and then it is pulled off, like a wax.

According to the BBC, Renaz Ismael, the barber behind the videos, says the process is safe and beneficial for his clients, but medical experts have advised those watching the clips not to try it at home.

Dr Anjali Mahto of the British Association of Dermatologists said she is particularly concerned that others might copy the process.

She told Metro.co.uk: ‘Social media platforms have the ability of quickly spreading health and beauty trends, through use of hashtags and challenges, but one thing that is rarely talked about is whether these trends are actually good for you.

‘If you do see a beauty trend or challenge on social media, we recommend that you do your research on the potential side effects.’

Some videos show people with wax inside their ears or nostrils, while other more extreme versions show people covered entirely from their forehead to their neck.

The page even includes some videos of children having the procedure.

Consultant dermatologist Dr Sharon Wong, explains that using wax like this is likely to damage the skin and could be even more serious. 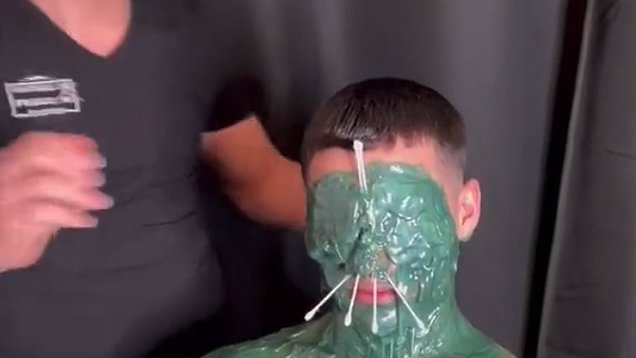 Speaking to Metro.co.uk, she said: ‘Using hardened wax to remove hair from the nostrils and ears not only potentially damages the skin lining these orifices and risks infection, but also risks getting wax stuck in the ear canals and nostrils, requiring surgical intervention to remove.

‘In more serious cases there could be danger of inhaling fragments of the wax into the airways, and those individuals who have gone to the extreme and covered the mouth with a full face layer of wax puts themselves at risk of asphyxiation

‘There are of course other elements of damage that can be caused, namely to the skin around the eyes as it is the thinnest on the body, and stripping hard wax off of this area poses a real possibility of tearing the skin.

‘Eyelashes and brows are there to help trap dirt, dust and wick moisture away from the eyes, and removal of the hair in these areas can result in eye irritation and excessive watering.’

Dr Shirin Lakhani of Elite Aesthetics added that hot wax around very sensitive areas like the eyes should only be used by trained professionals as most people don’t know how to handle it properly.

She said: ‘The trend that has developed since it was first posted is dangerous for a number of reasons.

‘For example if you had used an exfoliant on your face prior to getting waxed then this can cause over-exfoliation which can result in skin lifting or removing a layer of skin. Acne medications can also cause complications.’

She also said that those who are trained in using wax know how to ensure it is not too hot.

Dr Lakhani cotinued: ‘You could very easily burn the skin which comes with a risk of infection and scarring.

‘There is also a level of technique when it comes to removing the wax. If this is done incorrectly you may experience bruising and bleeding.

‘Microorganisms on the skin need food, moisture and heat to grow, and waxing can make folliculitis worse in others.’

She said she was particularly worried that with people stuck at home during lockdown and salons, they’re more likely to try facial waxing themselves.

‘As well as causing injury and trauma to the skin you should be very careful about trying treatments like this if you’re currently taking steroids or Roaccutane, you have bruising, swelling, rashes, open sores or even sunburn and cold sores,’ she said.

‘If carried out by a qualified and experienced practitioner who is aware of your medical history, medication and current skincare regime then it may be safe but I certainly wouldn’t recommend it at home for risk of serious burns to the skin, as well as lesions, pimples and permanent scarring.

‘For anyone wishing to remove hair from the face there are a number of other options which are safer and less painful, including laser hair removal. Again, when carried out by a trained and experienced practitioner this is safe and effective.’

In the videos, cotton swabs are used to create air passages to allow the person being covered to breathe while the wax hardens, but Julie Scott, Clinical Director of Facial Aesthetics and Etre Vous, said there was still a danger of someone suffocating.

She said that the trend was a ‘terrible idea’.

‘What concerns me most is that people with vulnerable skin are watching these videos and getting inspired to try this “trend” themselves when it could cause serious problems such as burns, skin tearing, bleeding, and post-inflammatory hyperpigmentation, or aggravate and spread existing conditions such as acne,’ she said.