Socrates believed that all wisdom begins with an admission of ignorance. With the knowledge that one knows nothing. “I do not know,” begins Plato’s telling of Socrates’ great speech. 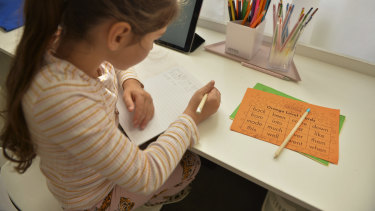 Victorian parents have faced the challenge of home schooling.Credit:Tanya Macheda

I’ve been thinking about this a lot in recent weeks because of a consistent feeling that, well, I know nothing. And the reason I have this feeling is because I’ve been trying to help my stepson Rafferty with his year 6 school work.

How many times have I looked at the question being asked on work sheets sent from the school and thought, jeez not sure I know the answer to that one? (This is a rhetorical question, readers, and you will not be tested on it.)

An exercise on decimals, for example, asks for answers to be displayed on a decimat. Hmm, OK. Are decimats a new thing, I wonder, confused, or was I away the day a teacher explained them in 1982? I try to get my head around them, but get distracted. I decide to colour my decimat in to make a yellow brick road, a daydreamy act that reminds me exactly why my own time at school was not a glittering parade of academic excellence.

I had kind of expected to be challenged by the maths, even year 6 maths. Worse has been when a reading or writing activity stumps me. One task asks for an explanation of the difference between a simile and a metaphor. Sure, I think to myself, I know that, and then in a panic realise I’ve forgotten. The question then goes on to state that the answer mustn’t be looked up on the internet. Which is a real shame because I feel the reason I don’t know the answer is precisely because I outsourced all my intelligence and memory to Google in about 2003.

I’m surely not alone – I hope I’m not alone – among parents to have found themselves scrambling a bit in the brain department over these weeks of home schooling, and to perhaps have felt in the experience the ghostly stirrings of their own time at school. That same old panicky flutter in the guts when you didn’t know or understand something.

But to be reminded in 2020 of all you don’t know is a good thing. A blessing even. Not knowing is the seed of wisdom. The wisdom, for instance, to seek out and trust in expertise. The wisdom to value teachers. And hopefully the wisdom to never, ever forget it.

Simon Castles is a desk editor at The Age.