Women are more disgusted by smells in the second half of their menstrual cycle because their immune system is suppressed and they are more at risk of infection, study finds

Women find bad smells and other people’s illnesses more revolting during the second half of their monthly cycle, a study has suggested.

The appearance of germs become more disgusting to women because they are more vulnerable to infection in that phase of the menstrual cycle.

The study by Jagiellonian University Medical School in Krakow, Poland, surveyed 93 women aged between 18 and 45 at different times in their cycles.

They asked participants to imagine seven different disgusting scenarios and asked to rate their levels of revulsion after looking at 20 photographs. 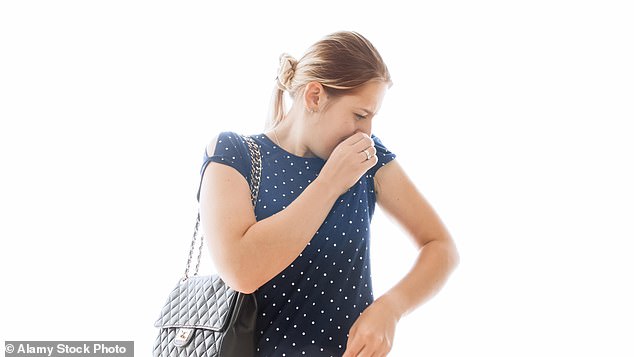 Women find bad smells and other people’s illnesses more revolting during the second half of their monthly cycle, a study by Jagiellonian University Medical School in Krakow, Poland, has suggested

Of the photographs they were asked to look at, the picture of a crowded underground train was found to be most repulsive.

Scientists said this showed women have evolved a heightened sensitivity to potential sources of infection in the the luteal phase — the second half — of the menstrual cycle.

Dr Andrzej Galbarczyk, an author of the study published in the scientific journal Evolution and Human Behaviour, said this has evolved as a method to protect a fertilised egg if they have conceived.

WHY DOES DISGUST PROTECT US FROM DISEASE?

The London School of Hygiene and Tropical Medicine, results confirm the ‘parasite avoidance theory’, in which disgust evolved in animals, encouraging them to adopt behaviours to reduce the risk of infection.

This behaviour is replicated in humans where disgust signals us to act in specific ways, which minimise the risk of catching diseases.

And women are more likely to be disgusted more often because they have a limited number of children so must pick their partners very carefully.

While men’s reproduction is limited only by the number of women they are able to seduce, researchers suggested in the Royal Society’s Philosophical Transactions B Journal.

The body is more likely to reject an egg if its immune system has been suppressed, he told The Times.

He said: ‘As a consequence, women during the luteal phase of the menstrual cycle are more vulnerable to pathogens and infections.

‘Therefore during periods of reproductive immunomodulation — periods of increased susceptibility to infections — women should feel more disgusted and increase behaviours that are related to avoidance of infections.

‘Those changes may be caused by a combination of different hormones or factors.’

It comes after a study in February found people who are easily repulsed may have evolved this trait as a natural way of avoiding infections.

Scientists found people with a low threshold for feeling disgusted are less likely to be infected with bacteria or viruses.

Dr Aaron Blackwell, co-author of the study, said: ‘We found that people with higher levels of disgust had lower levels of inflammatory biomarkers that were indicative of having bacterial or viral infections.

‘While the study shows that disgust functions to protect against infection, it also showed it varies across different environments, based on how easily people can avoid certain things.’

Charles Darwin first came up with the theory that humans evolved a sense of disgust as a way to avoid tainted food in 1872.

Subsequent studies found disgust helps protect people in affluent parts of the world where it is possible to choose to avoid a pathogen if you think one may be present.

For example, if a packet of chicken is taken out of the fridge and has an unpleasant odour, it can be thrown in the bin as other meals are available.

However, no research had been done to test the theory in environments when people have no way to avoid similar warning signs.