Washington: Donald Trump has an aide with a laptop and printer follow him around the golf course showing him uplifting news articles, according to The Washington Post.

Aides have also reportedly been calling his old network of contacts asking them to phone the former president to lift his spirits.

The report paints a portrait of a restless former commander in chief who is surrounded by ever more junior advisers. 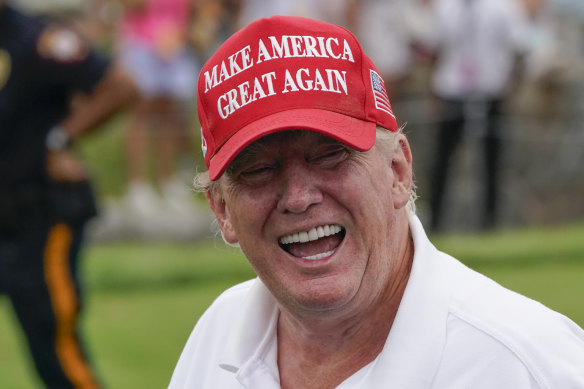 Former advisers suggested that was a contributory factor to a string of recent problems, including the storage of classified documents at Mar-a-Lago, and Trump’s widely condemned dinner there with Kanye West and the far-Right extremist Nick Fuentes.

Trump has spent most of his post-presidency at his resort in Florida and his club in Bedminster, New Jersey, and has not taken any holidays to anywhere he doesn’t own.

He plays at least 18 holes of golf most days, and is followed on the course in a buggy by a former cable television host. 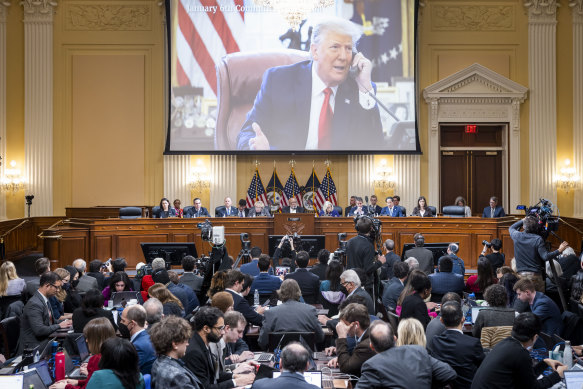 A video of former president Donald Trump is shown on a screen, as the House select committee investigating the January 6 attack on the US Capitol holds its final meeting.Credit:AP

She has a laptop, and sometimes printer, to print off positive online stories so he can read them on paper.

Old friends are said to have received calls from an aide saying there is “not much going on” and could they phone him.

One former long-time adviser told the Post: “He needs someone there to say ‘Here’s a really bad idea, and this is why’.”

Another long-time confidante told the newspaper Trump’s post-presidency life at Mar-a-Lago seemed “sad” and that, in attempting to make things like the White House, he had created a “Barbie Dream House miniature”.

Former aides also said that, having refused to accept losing the 2020 election, Trump was not interested in setting up a presidential library or a foundation like his predecessors.

In a statement, a spokesman for Trump responded that the former president had spent his time since leaving office “continuing to build up the MAGA [Make America Great Again] movement and helping elect America First candidates across the country.”

“There is nobody who has worked harder to advance the conservative movement,” the spokesman claimed.

“President Trump continues to be the single, most dominant force in politics and people, especially unnamed sources who purport to be close to him, should never doubt his ability to win in a decisive and commanding fashion.”

On Tuesday (AEDT), the congressional committee investigating the riot at the US Capitol on January 6 last year, referred Trump to the Department of Justice, recommending four criminal charges including insurrection.

In a long statement on Truth Social, his social media network, Trump responded that the proposed charges were “fake” and he had “done nothing wrong”.

“These folks don’t get it that when they come after me, people who love freedom rally around me. It strengthens me. What doesn’t kill me makes me stronger.

“This whole business of prosecuting me is just like impeachment was – a partisan attempt to sideline me and the Republican Party.”

However, Mitch McConnell, the Republican leader in the Senate, apparently referring to Trump, said: “The entire nation knows who is responsible for that day”.