When she began, history was generally taught with certainty about which events were worth recounting and why. 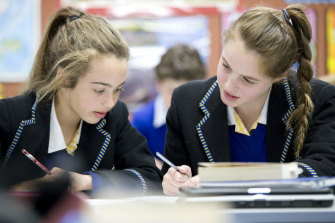 History has been at the heart of all reviews of the Australian curriculum.

These days, certainty has been replaced by “contestability”, and the president of the History Teachers’ Association of Australia says the state of affairs is a whole lot better.

“There is more of an emphasis on skills, not just content,” Ms Baron says of the contemporary approach to history teaching in Australian secondary schools.

Much of the content that was taught 30 years ago is still taught now. Students still learn about ancient Rome, the world wars and Anzac Day, for example.

“But it’s more about teaching kids to think and be better citizens; question things and understand that just because it’s written down, that doesn’t make it a fact.”

The question of how to teach history has stood at the heart of Australia’s national curriculum ever since it was launched more than a decade ago.

The first version of the curriculum, launched in 2010, was a response to history’s diminishing presence in Australian classrooms.

It introduced Aboriginal and Torres Strait Islander history to the classroom from year 3 on, included contested events such as Sorry Day and added a new cross-curricular focus on Asia.

Five years later, a review by conservative education experts Kenneth Wiltshire and Kevin Donnelly concluded that the curriculum was unbalanced and should be revised to “place more emphasis on morals, values and spirituality … and to better recognise the contribution of Western civilisation, our Judeo-Christian heritage”.

The latest review, published last week, has swung the pendulum back with interest, arguing the curriculum has long failed in its coverage of Indigenous history and culture.

The Australian government, along with states and territories, commissioned the curriculum review last year, but current federal Education Minister Alan Tudge was cool on its findings, arguing Indigenous history should be honoured “but not at the expense of dishonouring our Western heritage”.

Professor Donnelly also criticised the review for its “cultural-relativist approach [that] ignores the fact we’re a Western liberal democracy”.

But the architect of the review’s draft changes on Aboriginal and Torres Strait Islander history says critics are in denial about Australia’s true identity and want children to be taught an outmoded version of the national story. 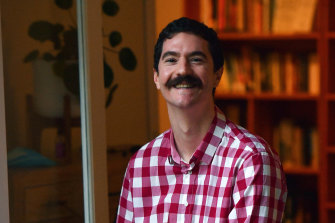 Humanities teacher Steven Kolber says history should be taught with an inquiry approach, not as a closed loop.Credit:Joe Armao

“We can’t prepare the kids for 1962, we’ve got to prepare them for 30, 40, 50 years down the track because the world is going to be different,” said Mark Rose, chair of curriculum authority ACARA’s Indigenous advisory committee.

“What we’re doing is really exposing kids to the reality of what is Australia: it is multicultural; it is Indigenous; it is located with Asia all around us and it has a rich colonial history in which Aboriginal people have participated.”

Professor Rose, a Deakin University Pro-Vice Chancellor who is also of Gunditjmara heritage, led a 12-month review that found the current curriculum was outdated and did not reflect Australia’s First Nations Peoples’ calls for truth-telling.

“Our people have claimed that we’ve been invisible and mute in the curriculum for a very long time and we’re just turning up the amplifier,” he said.

Ms Baron, who is also principal of Lakeland Senior High School in Western Australia, said the suggested changes to history content in the draft curriculum were relatively minor, despite the intense interest they had generated.

“There’s been some tweaking but there hasn’t been massive change. No one will look at it and go, ‘Oh my God my whole program has to get thrown out the window’.”

“Ancient Rome, Greece and Egypt, they’re all great but this is something I think Australian kids should know,” Ms Baron said. “There was an ancient culture here.”

Jeremy Stowe-Lindner is principal of Bialik College in Hawthorn, an independent school that uses both the Australian and Victorian curriculums.

Also a history teacher, he said it was ultimately teachers and not the curriculum that would most influence the tone and direction of content in Australian classrooms.

“Educators are not slaves to a document, they are Masters-qualified professionals who put thought into what and how things are delivered,” he said.

Steven Kolber, a humanities teacher at Brunswick Secondary College, said in any teaching from the curriculum – on First Nations history or any other historical subject – students were best served by an inquiry approach, not through imparting facts or assertions.

“You might have a question: was [European arrival] an invasion or was it a settlement? And then you’re exploring that as an inquiry, rather than just teaching it as a closed loop.”