Two friends and a sea monster brought Caitlin Kiernan and Kenny Kaplan together. These were not your average friends, nor sea monster. The creature came courtesy of a 1970s children’s TV show about two boys and their briny buddy. The friends were a little more current.

The couple’s story starts in 2014, two years after Ms. Kiernan, 50, was diagnosed with breast cancer. Five surgeries and six months of chemotherapy later, her relationship of nine years had fallen apart and she was bereft.

“I can’t begin to tell you what a horrible time this was,” said Ms. Kiernan, a writer who lives in New York. “Yes, breast cancer is a health crisis, but it also created a major identity crisis for me. After losing my breasts, half of my hair, my smooth skin and my relationship, I no longer recognized myself or my life. It was soul crushing.”

Even though she wasn’t interested in dating, she knew that she had to at least take the trainings wheels off. So when her close friend, Juliette Levy, suggested she go out with her brother-in-law’s best friend, a recently divorced music manager named Kenny Kaplan, she agreed. 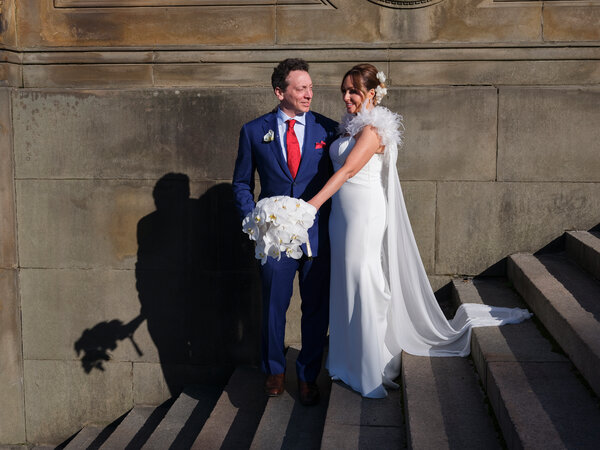 “Caitlin is a one-of-a-kind human being,” said Ms. Levy, a publicist in New York. “She’s a unicorn and has this amazing spirit and energy. It was more like, here’s someone I just love so much, and Dave had this incredible relationship with Kenny. I didn’t know Kenny that well, but we took a chance on us loving these two people and saying, what’s the worst that can happen?”

The brother-in-law in question, David Masor, had known Mr. Kaplan for years and felt that, if nothing else, at least Mr. Kaplan and Ms. Kiernan would pass an enjoyable evening together. “Kenny is a very thoughtful person, very introspective,” said Mr. Masor, 47, who is a founder of the real estate firm Home Applause in Montclair, N.J. “He’s got a spiritual side to him and he would do anything for a friend or family member.”

“He’s always supportive and there in a nonjudgmental way,” he continued. “He can seem standoffish at first, but it doesn’t take long to be able to peel back that layer to find he’s fun, confident and can talk about any subject.”

Their first date was at a wine bar on Manhattan’s Upper East Side. As they skimmed topics, they discovered a shared appreciation for “Sigmund and the Sea Monsters.”

“I connected with that show, because growing up I always felt like a weirdo in my family,” she said. “So when Kenny knew something about something of my childhood, it was a huge sign.”

Not only did Mr. Kaplan, 46, know the show, he had the toy characters in his office. “I liked the aesthetics,” he said. “I liked everything about it.”

He liked everything about her, too. She was very put together and stylish, whereas he often looked like he just popped out of a 1990s mosh pit. “I am pretty laid back so I liked that she had that kind of assertiveness that people from here have, but as we dug in and started chatting there was a playful side to her, she’s very open,” he said.

Mr. Kaplan is also Jewish, and although Ms. Kiernan grew up in an Irish Catholic household in Middletown and Stone Ridge, N.Y., she had been connected to Judaism and had seriously considered converting long before she met him. He also had two children, Carly, now 14, and Jonah, 11, which appealed to her, since giving birth was one of the casualties of her cancer. Chemotherapy pushed her into early menopause.

After the night, he walked her to her car, gave her a quick peck on the cheek and asked for a second date. She said yes.

[Sign up for Love Letter and always get the latest in Modern Love, weddings, and relationships in the news by email.]

But there was a hitch, as there so often is.

During this time, she was still completing her cancer treatments. Between Ms. Kiernan’s and Mr. Kaplan’s first and second dates, she had traveled to Virginia for the final phase of her treatment: nipple tattoos. She wrote an article about the tattoo parlor, chronicled by a film crew, that was published on the Well blog of The Times. The story went viral, and she panicked.

“I’d been so interconnected with women going through reconstruction and oftentimes their spouses and partners weren’t supportive,” she said. “They look down on a reconstructed breast. It hadn’t been talked about before. I was like, ‘He’s not going to want to date me anymore.’ It could be really embarrassing; you’re showing your boobs to the world.”

Mr. Kaplan had seen the story and video. But he was the opposite of embarrassed. Instead, he told her how strong and brave she was. “She’s doing important things for other people, and I’m all about that,” he said. “She took her experience and gave people hope, as opposed to ‘woe is me.’ I liked the fight.”

They went on a series of active dates: a painting and wine class; a sushi and sake-making class; and a private, stand-up paddling board class at the Jersey Shore. They grew closer and closer. Mr. Kaplan encouraged her to use her experience as a survivor and a beauty producer at Amazon to write a book to help other cancer patients. That book, “Pretty Sick: The Beauty Guide for Women With Cancer,” was published in 2017.

He proposed on a trip to Boulder, Colo., that same year, on an early morning hike to watch the sunrise.

“We are both independent and respectful of each other’s needs,” he said. “We both are down for adventure and love to travel, but she is the first person to push me to do what I want. If it’s something I am interested in and she’s not, she won’t suggest an alternative. She will say, ‘Go do it! You should!’ and same goes for her.”

They planned a March 2020 wedding in Napa, Calif., but Covid-19 squashed that idea. They waited out the pandemic in Freehold, N.J., Mr. Kaplan’s hometown, with his mother and two children.

They were married, finally, on March 20, 2021 at the Mark Hotel in Manhattan before a small group including Ms. Levy, Mr. Masor and their spouses. Rabbi Judith B. Edelstein, with whom Ms. Kiernan had studied for five years before her conversion last year, led the ceremony.

“The thing about our relationship is that neither one of us intended for it to be a relationship,” Ms. Kiernan said. “We just wanted to have fun and laugh. But what we got out of it was so much more. We fell in love, not only with each other but with life again.”

Star Lensman Mark Weiss, a celebrated photographer whose subjects have included the Rolling Stones, Kiss and Madonna, captured the couple’s wedding day. He and Mr. Kaplan are friends and he volunteered his services.

The Wedding Attire Ms. Kiernan designed her dress with Madeline Gardner of Morilee. “With all the wedding dresses out there, I could not find one that flattered my body,” the bride said. “I was very conscious of how my reconstructed breasts and chemopause-induced curves looked.” After an eight-month search, Juliette Levy, the friend who introduced her to Mr. Kaplan, put her in touch with Ms. Gardener. The groom wore a cobalt blue Ravazzolo suit.