Violent protests erupted in a Chinese city in a rare show of descent against Beijing’s brutal zero-covid lockdown.

Footage circulating on social media showed dozens of people in Shenzhen chanting ‘lift the lockdown’ on September 26 as rows of police in gowns, face masks and visors watched on.

People rallying against the new lockdown are seen jostling forwards and angrily exchanging wars of words with officers as well as brawling with them.

A number of people also threw bottles of water at officers during the protest.

A woman shouts: ‘Police are hitting people’ in one clip taken during a protest in Shawei, a neighbourhood in Futian district where the city government is based.

Officers had raised a banner during the protest which said ‘Please co-operate as police are enforcing the law.’

There were other reported protests in the districts of Xinzhou and Huaqiangbei, also in Shenzhen.

The protests came as the city of more than 18 million people reported just 10 infections on Tuesday, but officials have still ordered residents in three districts to stay home and implemented ‘control measures’ as China sticks to its strict zero-Covid policy. 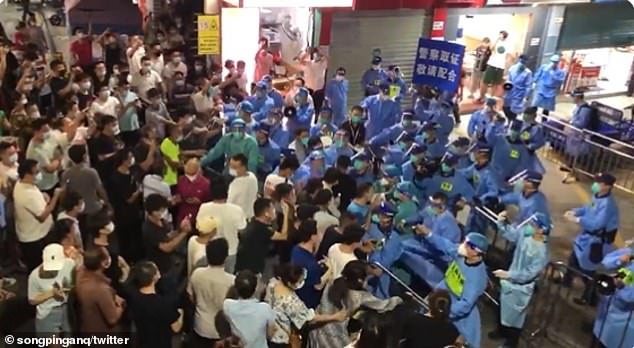 Footage circulating on social media showed dozens of people in Shenzhen chanting ‘lift the lockdown’ on September 26 as rows of police in gowns, face masks and visors watched on

Officials in the area are under pressure to stamp outbreaks out as there is a key political meeting in Beijing next month.

Measures including shutting Shawei’s subway station have been taken ‘as part of pandemic prevention and control’, the city’s metro operator said in a statement.

The station was shut down from 10pm on Monday until further notice.

‘Control measures’ ban people from leaving Shawei, and those in high-risk areas where infections were reported were ordered to stay at home.

Across three districts, Futian, Luohu and Longgang, at least 14 ‘high-risk areas’ were under lockdown on Tuesday.

Residents were forced to stay in their homes but health officials did not offer details on the number of people affected.

A further 15 neighbourhoods were marked as medium risk, which means that residents are only allowed to walk inside their housing compounds.

The new lockdown comes after Shenzhen, which neighbours Hong Kong, was previously subject to strict Covid restrictions which saw schools and entertainment venues closed for weeks in early September.

In the city, residents are only allowed to board public transport, enter a restaurant or access public services including hospitals if they have a negative PCR Covid test taken within 24 hours.

It is unlikely that the measures will be eased, as the Chinese Communist Party is due to hold its congress on October 16.

During the congress, President Xi will look to see in a third term as general secretary.

It comes after Hong Kong on Monday scrapped its mandatory hotel quarantine requirement for arrivals after the strict regulations threatened the city’s status as a key financial hub. 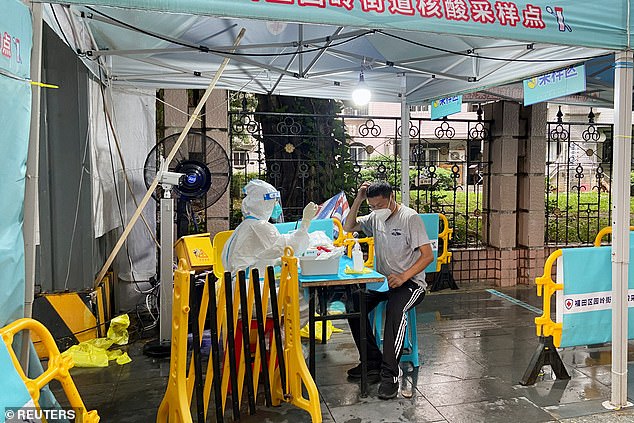 Since the virus first emerged in late 2019, China is the only major economy which is sticking to a zero-Covid strategy.

Its policies of swift lockdowns, long quarantines and mass testing have put its economy under strain.

A two-month lockdown in Shanghai earlier this year, which is home to more than 25 million people, saw food shortages, deaths due to lack of access to medical care and scattered protests.

And in August, a Covid flare-up left more than 80,000 tourists stranded in the resort city of Sanya.

Furious tourists took to the streets to demand that local leaders meet with them.

Other countries stepped down their Covid measures after large-scale vaccination campaigns.