They never made it. Their airplane disappeared between Guam and the Philippines, leaving behind no trace.

Ever since, their families have been fighting to get answers about the mission from the Pentagon. They also want their loved ones to be recognized on the Vietnam Veterans Memorial in Washington, D.C.

For the families, it’s been heart-wrenching that the soldiers were not properly memorialized like others who died in the war.

“I do feel frustrated. It’s almost as if they never existed as soldiers. It’s almost like they don’t matter, that their deaths don’t matter,” said Dianna Taylor Crumpler, of Olive Branch, Mississippi, whose brother, James Henry Taylor, an Army chaplain, died on the flight.

On Saturday, families of more than 20 of the fallen soldiers were on hand for the unveiling of a memorial in Columbia Falls, Maine, to honor those who perished when the plane disappeared over the Pacific Ocean. Columbia Falls is about 190 miles (305 kilometers) east of Portland, Maine. 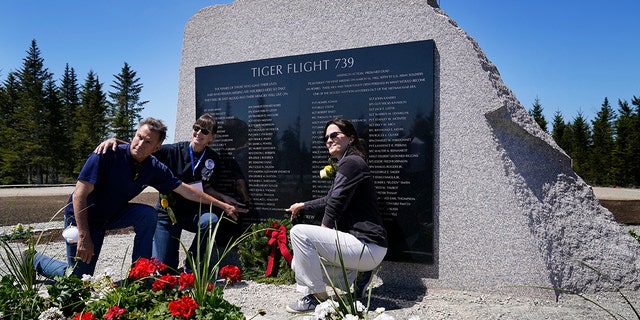 John Williams, of Peru, Indiana, left, and his sisters, Maria McCauley, of Branson, Missouri, center, and Susie Linale, of Omaha, Nebraska, pose at a monument to honor the military passengers of Flying Tiger Line Flight 739, Saturday, May 15, 2021, in Columbia Falls, Maine. Their father, SFC Albert Williams, Jr., was among those killed on the secret mission to Vietnam in 1962. (Associated Press)

“It’s incredible,” said Donna Ellis, of Haslett, Michigan, who was 5 when her father, Melvin Lewis Hatt, died in the crash.

The mission, early in the Vietnam war, is shrouded in mystery.

Soldiers from across the country assembled at Travis Air Force Base in California before boarding a propeller-powered Lockheed Super Constellation operated by the Flying Tiger Line, which chartered flights for the U.S. military.

The 93 U.S. soldiers, three South Vietnamese and 11 crew members aboard Flight 739 never made it to Saigon. It departed from California and made refueling stops in Hawaii, Wake Island and Guam before vanishing on the next leg of the flight to the Philippines on March 16, 1962. 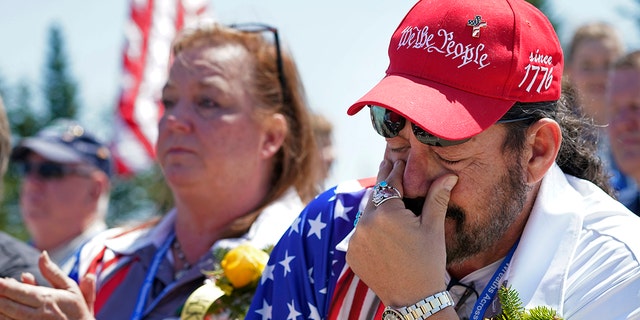 John Biernacki of Greenville, Texas, wipes tears during the unveiling of a monument to honor the military passengers of Flying Tiger Line Flight 739, Saturday, May 15, 2021, in Columbia Falls, Maine. His father, MSgt., Henry Biernacki, was among those killed on the secret mission to Vietnam in 1962. (Associated Press)

There was a report of a midair explosion witnessed by sailors on a tanker in the area, but no debris from the aircraft was recovered.

The families have spent years seeking answers to no avail. Freedom of Information Act requests by Ellis and others yielded redacted documents with little useful information about the clandestine mission.

“It turns into a rat maze,” Ellis said.

Because their deaths were not in the combat zone, their names were not allowed on the Vietnam Veterans Memorial in Washington.

Sen. Gary Peters, a Democrat from Michigan, took up the cause and introduced legislation in 2019 to allow the names to be etched on the memorial, but it never made it to the Senate floor. 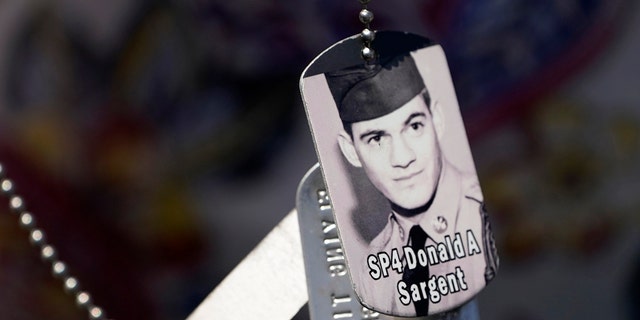 A relative of SP4 Donald Sargent wears his dog tags at the unveiling of a monument to honor the military passengers of Flying Tiger Line Flight 739, Saturday, May 15, 2021, in Columbia Falls, Maine. Sargent was among those killed on the secret mission to Vietnam in 1962. (Associated Press)

“It is past time that we properly honor those lost. That’s why I will continue to work with my colleagues and the families of those lives lost on ways we can honor the servicemembers,” Peters said.

In Maine, the founder of Wreaths Across America, which places wreaths at Arlington National Cemetery and at veteran gravesites around the world, was moved by the story and decided to create a monument. The granite stone has a marble marker with the names on it.

The unveiling Saturday featured a reading of the names, a rifle salute, the playing of taps and the laying of a wreath.

Phil Waite from the United States of America Vietnam War Commemoration told the group he believes the memorial represents “a first step” to greater recognition. “I think there’s more to come,” he said.

The event provided an opportunity for families to get together and share stories.

“This will be closure for a lot of families,” said Susie Linale, of Omaha, Nebraska, part of a contingent of six family members, including her sister and brother. They wore buttons with an image of their father, Albert Francis Williams Jr., who died in the crash.