The video, which was recorded in a hallway and obtained and edited by the Austin American-Statesman and KVUE of Austin, shows the officers arriving at Robb Elementary School at 11:36 a.m. May 24, three minutes after the gunman was seen entering the school and walking down an empty hallway.

NBC News has not independently obtained the video, which provided the first view of a law enforcement response that a Texas public safety official has called an “abject failure.” 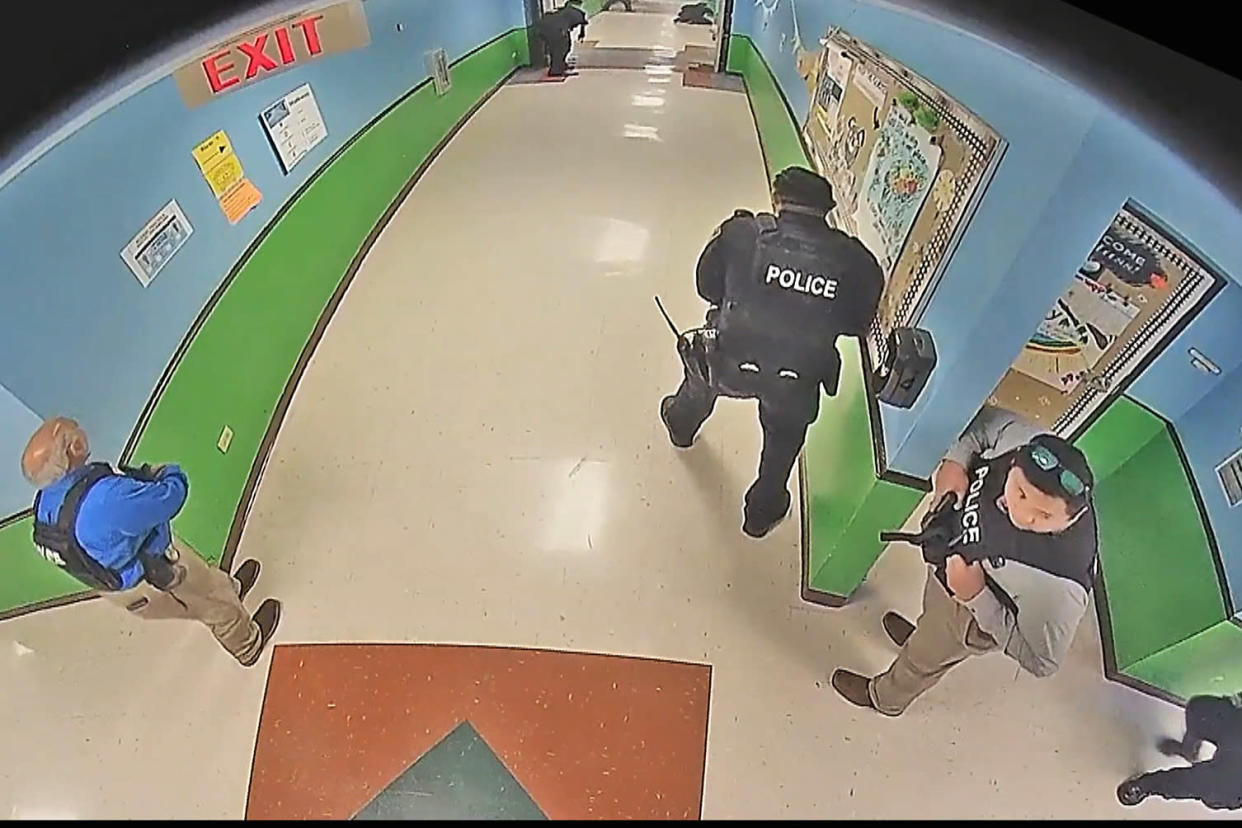 Roughly 20 seconds after the 18-year-old gunman is seen entering the school, he turned to his left and opened fire on a classroom.

Authorities have said that he fired at least 100 shots with an AR-15 style rifle into adjoining classrooms filled mostly with fourth-graders.

Chillingly, a student who KVUE reported had been in the bathroom — and was just steps behind the gunman — could be seen in the video running from the gunfire after watching the initial burst of shots.

The Austin American-Statesman reported that the student was later rescued.

Roughly a minute later, after several officers approached the classroom, a second burst of gunfire could be heard and an officer could be seen racing down the hall. Two others slowly followed him.

It isn’t clear what agencies the officers were from. Neither local, state nor federal agencies involved in the response immediately responded to requests for comment Tuesday evening.

In the hour that followed the second round of shots, the video shows the number of officers inside the hallway swelling.

At 12:21, several officers with tactical gear can be seen approaching the classroom, yet it wasn’t until 12:50 that officers entered and fatally shot the gunman.

While waiting, one officer can be seen rubbing what appears to be sanitizer on his hands after crossing the hall to get to a wall-mounted dispenser.

Texas Gov. Greg Abbott told KVUE last week that the video from inside the school “needs to be released” to show “exactly what happened.”

In a statement Tuesday, Texas Department of Public Safety Director Steve McCraw blasted the release, saying the video should have been seen first by those hit hardest by the massacre.

“I am deeply disappointed this video was released before all of the families who were impacted that day and the community of Uvalde had the opportunity to view it,” he said in a statement posted on the department’s website.

Brett Cross, father of 10-year-old Uziyah Garcia, who died in the shooting, told NBC News’ Tom Llamas that watching the video was “heartbreaking.”

“We relive this every day,” he said. “Now we’re gonna hear it. Not just relive it — it’s a continuous thing.”

He added: “Nobody is telling us anything. And it’s disrespectful to not just us but our kids.”

In an editorial published Tuesday, the American-Statesman said it published the video “to continue to bring to light what happened at Robb Elementary, which the families and friends of the Uvalde victims have long been asking for.”

At a hearing with lawmakers last month, McCraw described the response to the shooting as an “abject failure and antithetical to everything we’ve learned over the last two decades since the Columbine massacre.”

“The only thing stopping a hallway of dedicated officers from (entering rooms) 111 and 112 was the on-scene commander who decided to place the lives of officers before the lives of children,” he said.

The person state officials have identified as the commander, Uvalde Consolidated Independent School District Police Chief Pete Arredondo, told the Texas Tribune last month that he considered himself a frontline officer and not the one managing the response.

“I didn’t issue any orders,” he told The Tribune. “I called for assistance and asked for an extraction tool to open” the locked classroom door.

Arredondo, who has been on leave from the school district since June 22, resigned July 2 from a seat on the Uvalde City Council that he won earlier this year.