Victoria Police’s elite tactical unit has been running high-risk operations that have resulted in serious injuries and alleged human rights abuses without proper planning, obtaining authorisation to intervene and properly documenting its use of force, according to the state’s peak integrity body.

The latest damning assessment of the Critical Incident Response Team (CIRT) – which was heavily involved in responding to the 2017 Bourke Street killings by James Gargasoulas – has been released by the Independent Broad-based Anti-corruption Commission (IBAC). 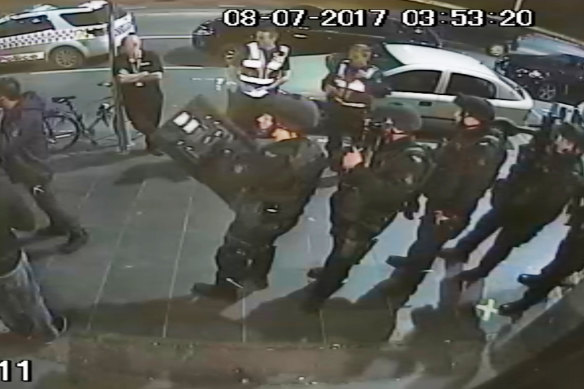 Officers from the Critical Incident Response Team preparing to go into Inflation nightclub.

The IBAC report focuses on CIRT’s conduct at three high-profile incidents, including the 2017 police shooting of two people at a CBD nightclub and the 2019 botched raid on the Hares & Hyenas bookshop in St Kilda that left an innocent man seriously injured.

It found a series of “misconduct risks and issues” that showed CIRT acted unilaterally to insert themselves into police operations without the knowledge of on-scene commanders, failed to conduct risk assessments of volatile situations even after being presented with information that circumstances had changed and routinely failed to properly document its use of force or activate body-worn cameras.

It also found the unit was defined by a “hypermasculine culture” where more than 90 per cent of officers are men.

A Victoria Police spokesperson said the force “acknowledges IBAC’s report and will take the time to consider its six recommendations” and noted that previous recommendations made after those incidents had already been accepted.

“As many in the community would be aware the Critical Incident Response Team operates in a complex environment that involves significant risk to the public, other police and CIRT members,” the spokesperson said.

In the nightclub shooting incident, IBAC said CIRT officers did not revise their plan to storm the venue and confront the patron despite confirming that the suspect was carrying a plastic imitation gun at the dress-up swingers’ party.

IBAC also said Victoria Police command had rejected the findings of its own internal review into the incident that “demonstrated that there were safer, reasonable and less forceful options available than the tactical response deployed by CIRT”.

At Hares & Hyenas, the report found that CIRT intervened in the hunt for the suspect that was mistakenly believed to have fled into the bookshop without informing police already involved in the operation.

“The officer in charge said that they were not aware of CIRT’s attendance until advised over police radio that a person was in custody,” the report said.

It also condemned the failure of the arresting officer to explain to the man, who was later determined to be innocent, why he had been arrested or advise him of his rights.

IBAC found that the officers involved in the incident “acted inconsistently with the Victorian Charter of Human Rights and Responsibilities”.

The report notes Victoria Police has implemented a series of changes to its training, policies and procedures since these incidents.