As Mario wields dual pistols in a new space-faring tactics game, and prepares to star in an animated movie where he’s voiced by Chris Pratt doing what sounds like a New Jersey accent, some may wonder what happened to Nintendo’s bubbly, ubiquitous everyman mascot.

But the truth is, Mario’s always been stretched thin with bizarre occupations and unexpected stories. They just haven’t been this visible to the mainstream public for a long time. 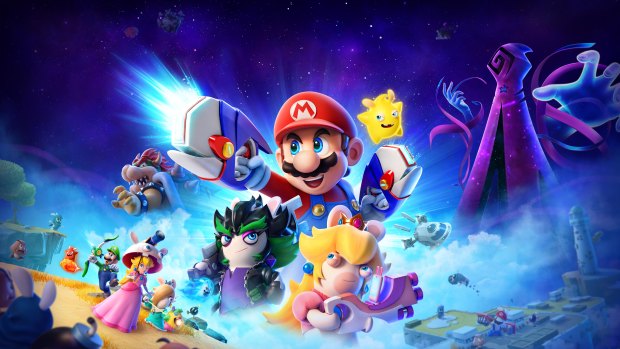 Super Mario, the best-selling game series, turned 37 last month. But the character himself is a bit older, first appearing as a carpenter battling Donkey Kong in 1981. Since then the guy has been a builder, a demolition expert, an artist, a gymnast, a referee, and played virtually every sport there is. He’s taught kids typing and history, battled viruses as a presumably unlicensed medical professional, had several cartoon series’ and starred in dozens of turn-based roleplaying games (during some of which he’s made of paper). He’s beaten friend and foe alike with his fists in Smash Bros., his driving prowess in Mario Kart and pure luck in Mario Party.

Counting only official sales figures of the main Super Mario series of running-and-jumping games, Nintendo has sold more than 380 million copies, making it more successful than FIFA or Grand Theft Auto. However if you also include those various spinoff games, Mario is the biggest game franchise of all time by a huge margin, selling more than 760 million copies.

And it’s not just that he was big in the ’90s. In the last two decades there have been six Mario games that have individually sold more than 20 million copies each, making them among the most popular games of all time. This includes the latest game in the main series Super Mario Odyssey, and Mario Kart 8 at an astonishing 55 million copies.

The newest game released last week, Mario + Rabbids: Sparks of Hope, is a collaboration with France-based Ubisoft and a follow-up to 2017’s Kingdom Battle. In it, the Mushroom Kingdom that Mario calls home has collided with the world of Ubisoft’s minion-like Rabbids. Inexplicably, this results in both endless parodical slapstick humour and a need to engage enemies in tactical cover-based shootouts.

The game, like its predecessor, is a good example of what has made Mario so enduring; he isn’t really much of a character at all. His skillset, and the encyclopaedia of familiar worlds, enemies and friends his games have built up over time, are so generic that they can be applied to anything, and serve as their and for what players should expect.

Creative Director Davide Soliani, who’s based in Milan and has worked closely with Nintendo on the concept since he first pitched it to them nine years ago, said the only concern Mario’s caretakers had initially was the imagery of Mario wielding conventional firearms. In fact they were still concerned a year into development of the first game, but together the companies leveraged Mario’s chameleon-like strength to strike the right balance.

“They look like toys, but in a way they still speak to the player saying ‘this is the kind of behaviour you should expect’,” Soliani says of the weapons, which include an umbrella that produces a shotgun-like spread and a chunky bright green compound bow.

“He or she might be using a cannon in the shape of a Nintendo pipe, but its meaning and its use in combat is clear.”

The 2017 game riffed on a lot of established strategy combat games like X-COM, so having colourful toy-like versions of familiar weapons helped players understand the rules. But Soliani said the team have continued to push the gameplay in their own direction for the sequel, which is more focused on direct action than pointing and clicking, and that’s also affected the available weapons.

“For example we have the Disruptor, which is a Frisbee, it’s completely a toy you might play with at the park with your friends. But in the game it has the interesting behaviour of hitting multiple enemies and not even in a straight line,” he said.

“But then we have a sword, and we’ve invented sci-fi guns. We’re not limiting ourselves anymore, because now that players know the game is absolutely playful and joyful, and not serious, everyone feels safe to just dive in.”

Kingdom Battle technically wasn’t Mario’s first foray with firearms. The 1993 Super Nintendo game Yoshi’s Safari had players using the Super Scope lightgun controller to point at their screens and shoot classic Nintendo enemies from a first person perspective, while the Super Smash Bros series has let Mario make use of various guns since 1999.

Even the ubiquitous fire flower and items like the water-spewing F.L.U.D.D. from Mario Sunshine could be considered gun-like. But the common thread is that the joy of play always come first and is supported by the cartoon violence, and Mario’s enemies (which just as often act as friends) always come back with a smile on their faces.

What’s more unusual about Sparks of Hope is that it’s very much a Ubisoft game inspired by Nintendo, rather than something produced by the Big N itself.

In the early ’90s Nintendo was open to expanding the franchise by licensing Mario out, leading to almost uniformly terrible or disastrous products including the 1993 film starring Bob Hoskins, questionable education software for computers, and even a game for Philips’ ill-fated CD-i console, now often described as one of the worst commercial video games of all time.

By the time the company was willing to hand the keys to the Mushroom Kingdom out to others again — lending their mascot to former rival Sega for 2007’s Mario & Sonic at the Olympic Games for example — it did so with a large amount of creative control, while also expanding Mario in all directions with its in-house efforts ranging from Paper Mario to basketball games.

So why does Mario seem to be so much more present in the mainstream consciousness now? Part of the reason is the massive success of the Nintendo Switch, the company’s best-selling home console of all time, where Mario’s current adventures are available.

But the other part is Nintendo’s relatively recent desire to partner with non-Japanese companies to expand the Mario brand. This includes the game collaboration with Ubisoft, a deal with NBCUniversal to bring Mario to theme parks, and of course, a partnership with Illumination (of Despicable Me fame) for a new film that couldn’t look more different to the 1993 effort.

In the debut trailer earlier this month, Mario’s trademark nondescriptness was again on display. Fans raved about the menacing King Bowser voiced by Jack Black, the hilarious penguin fighters, the colourful Mushroom Kingdom and the short glance at a terrified Luigi, but were bemused by Pratt’s somewhat dry Mario, which seemed to be present only to pull the story through a world much more interesting than itself.

But that shouldn’t be too much of a surprise, since that’s exactly how the games work too.