In a blunt statement aimed at Russian President Vladimir Putin, Merkel said Navalny was the victim of attempted murder and challenged the Russian government to explain what happened. 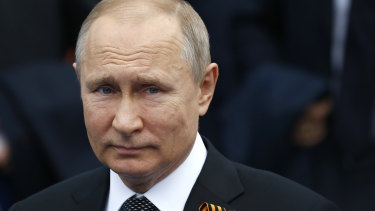 "He was meant to be silenced. This raises very difficult questions that only the Russian government can answer, and has to answer," Merkel said.

"We expect the Russian government to make a declaration about the incident."

The British government also turned up the heat on Putin, demanding the Russian government "tell the truth" about the failed assassination attempt.

Navalny – a politician, anti-corruption campaigner and frequent critic of Putin – became seriously unwell on a flight from Siberia to Moscow on August 20. His supporters instantly claimed his tea had been poisoned at Tomsk Airport.

Navalny was initially treated in Russia by intensive care doctors who claimed he was not poisoned.

The 44-year-old was later transferred to Germany for medical treatment at the insistence of his family and the international community. 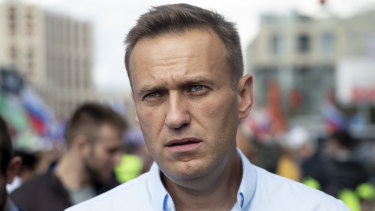 Opposition activist Alexei Navalny at a protest in Moscow, Russia in 2019.Credit:AP

In a statement released prior to Merkel's condemnation, the German government said tests by its Bundeswehr military laboratory had found "proof without doubt of a chemical nerve agent from the Novichok group".

Novichok was used to poison former Russian spy Sergei Skripal and his daughter, Yulia, in the English city of Salisbury in 2018. The British government blamed that attack on the Russian Military Intelligence Service, also known as the GRU.

British Prime Minister Boris Johnson said it was "outrageous" that Navalny had been targeted by a nerve agent.

"We have seen first-hand the deadly consequences of Novichok in the UK," Johnson said.

"The Russian government must now explain what happened to Mr Navalny. We will work with international partners to ensure justice is done." 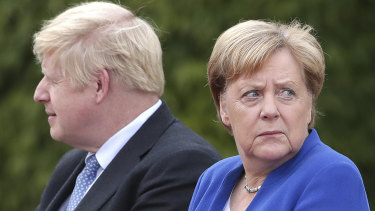 Former spy Alexander Litvinenko was famously murdered with a cup of radioactive tea in 2006.

"The Russian government has a clear case to answer" and must tell the truth about what happened to Navalny, Raab said.

"We will work closely with Germany, our allies and international partners to demonstrate that there are consequences for using banned chemical weapons anywhere in the world."

Novichok nerve agents were banned in late 2019 after being added to the Chemical Weapons Convention's list of controlled substances.

Germany, the European Union and NATO will wait to see how Moscow responds to its allegations before deciding what to do next.

Russia's ambassador to Berlin was summoned to the chancellery to discuss the findings.

Sajid Javid, Britain's home secretary at the time of the Salisbury poisoning, on Wednesday said the use of Novichok against Navalny "shows the Russian state has learned nothing from its reckless use of this Soviet-era chemical weapon on British soil".

"It is not even pretending to be a democracy," he said.

Navalny remains in a medically induced coma in Berlin.

Our weekly newsletter will deliver expert analysis of the race to the White House from our US correspondent Matthew Knott. Coming soon. Sign up now for The Sydney Morning Herald‘s newsletter here, The Age‘s here, Brisbane Times‘ here and WAtoday‘s here.