Incredible underwater footage captured the moment two southern keeled octopuses started mating in an oyster shell, but the story has a tragic end.

The video was filmed by professional diver and photographer Jules Casey on Tuesday in Port Phillip Bay, southern Victoria.

It showed the female octopus hiding in a oyster shell, before the male crawled over and perched on top – flaring his eight tentacles. 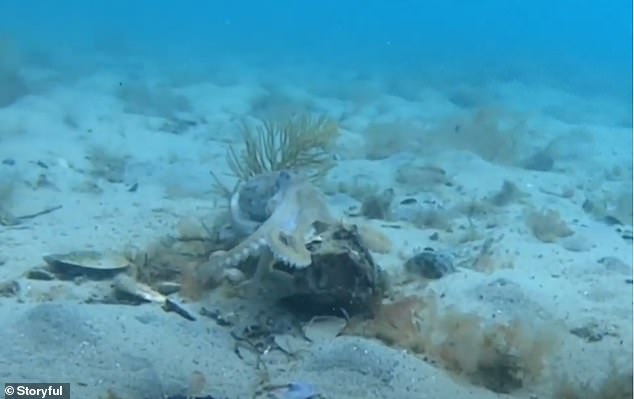 Pictured: The male octopus climbing on top of the oyster shell where the female is hiding

In a caption on Instagram, Ms Casey wrote: ‘He then inserts his third modified arm into her mantle to pass the sperm packages.’

Upon finishing the act, the male octopus suddenly changed from a creamy colour to a dark brown before he crawled off and settled on the sand.

In a devastating turn of events, the award-winning marine photographer explained that the end of the mating ritual means death is on the horizon for both molluscs.

‘The male dies shortly after mating and the female dies after caring for her eggs,’ she wrote. 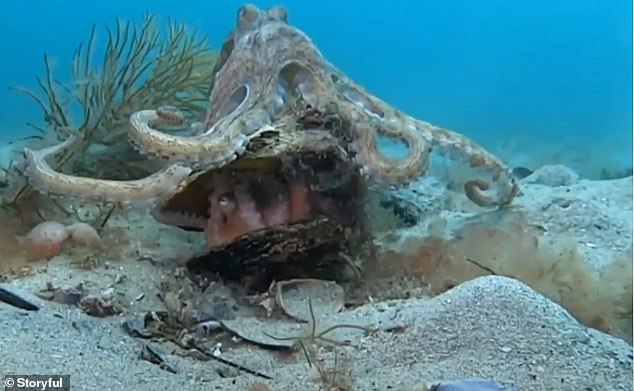 In a caption on Instagram, Ms Casey wrote: ‘He then inserts his third modified arm into her mantle to pass the sperm packages’ (pictured)

‘So sad their lives are so short,’ one viewer replied.

Other social media users were in awe of the footage and used the comments section to applaud Ms Casey for filming the act.

‘Perfect timing for you to get this video,’ one viewer wrote. 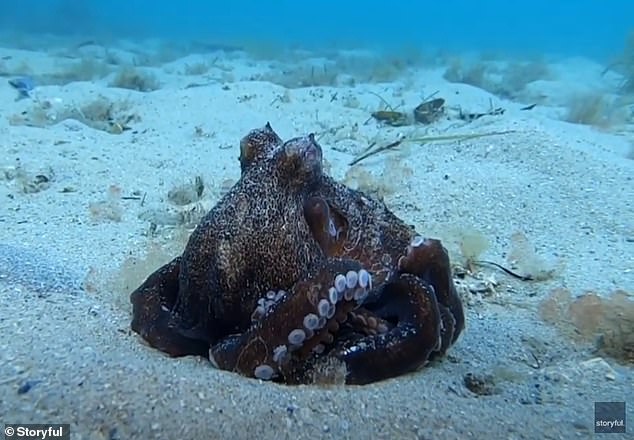 Upon finishing the act, the male octopus suddenly changed from a creamy colour to a dark brown (pictured)

‘Wow. What an incredible thing to witness,’ said someone else.

The photographer replied: ‘Very lucky to see this gorgeous moment.’

When someone else commented and said they couldn’t believe how tiny the species was, Ms Casey said: ‘They could fit in the palm of your hand.’

The southern keeled octopus is common in shallow coastal waters of south-eastern Australia.

It reaches a maximum of 36cm and frequents sand habitats and seagrass beds in shallow waters, but has been captured at depths greater than 250m.

During the day it buries in the sand or hides in shells or human rubbish – often using jars and bottles as hiding spaces.

When buried, it can raise one eye like a periscope above the level of the sand to check for predators before emerging.

Feeds primarily on crabs and other crustaceans.

The female lays large eggs and attaches them singly to hard rocky surfaces.

The hatchlings are well-developed and immediately settle in the seafloor and start foraging.