The proportion of Britons in work surged to a record high in November in a pre-Brexit economic boost for Boris Johnson, new figures revealed today.

An increase in the number of women in work and the continued growth of those becoming self-employed drove the employment rate to 76.3 per cent, 0.6 percentage points higher than a year earlier and up 0.5 on the previous quarter.

At the same time the number of people claiming unemployment benefit dropped by 7,000 to just below 1.31 million in the three months to November, the Office for National Statistics revealed.

It means that 3.8 per cent of people who are looking for work do not have a job, largely unchanged on the previous quarter.

However, the figure is 0.2 percentage points lower than a year previously, meaning that unemployment is currently at its lowest level since December 1974.

David Freeman, the head of labour markets and households at the statistics agency, said: ‘The employment rate is at a new record high, with over two-thirds of the growth in people in work in the last year coming from women working full-time.

‘Self-employment has also been growing strongly, and the number of people working for themselves has now passed five million for the first time ever.’ 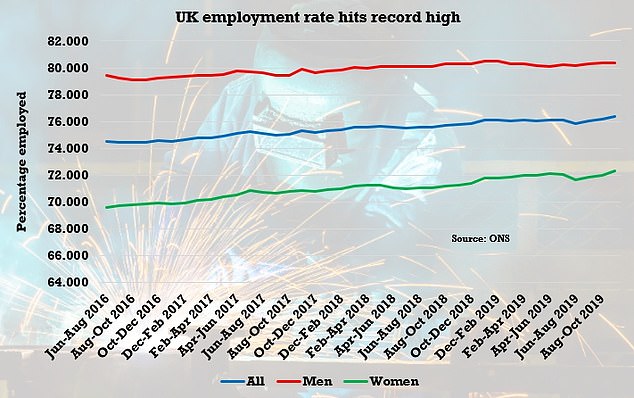 The growth in average weekly earnings stalled, remaining unchanged at 3.2 per cent in November, the same as figures from a month earlier. This increase includes bonuses. Without them, growth slowed to 3.4 per cent, down from 3.5 per cent.

‘While pay growth has eased since last summer, with inflation remaining subdued, earnings are continuing to increase in real terms,’ Mr Freeman said.

Earnings are still lower than in the run-up to the financial crisis, the ONS said. In real terms, average regular pay was £472 per week, which is £1, or 0.2 per cent, less than in March 2008.

Wage growth was driven by increases in the construction sector, and among financial and business services employees.

Employment Minister Mims Davies said: ‘These figures show not only more people in work than ever before, but it’s also pleasing to see alongside this a rise in those working in higher skilled roles.

‘It means at the dawn of the decade the opportunities to progress in work are out there, with people already benefiting from another month of rising wages.

‘This, coupled with business confidence turning a corner, is paving the way for an even stronger jobs market in 2020.’