Now the healthy-eating police are on your PHONE! Uber Eats customers can now see how calorific their favourite pizza and burgers are before ordering them ‘so they can make better choices’

Uber Eats customers hoping to order their favourite pizzas and burgers are to be bombarded with calorie counts so they can ‘make better choices’, the takeaway giant said today.

Britons sifting through menus for Pizza Hut, Burger King and Leon on the app will be shown the calorie counts for each option from this week.

The takeaway giant — which sells food from more than 10,000 restaurants — said they aimed to ’empower customers’ with the update, and hoped more businesses would also start displaying calories on their menus.

Ministers championing healthy eating welcomed the move as an ‘important step’ to make customers aware of the number of calories in their meal.

It comes eight months before all restaurants will be forced to display the number of calories in each meal option on their menu under Health tsar plans.

A report warned last month that hard-pressed British families already face an extra £160 being slapped on their annual shopping bill due to Boris Johnson’s crackdown on obesity and plastic waste.

But the Prime Minister has slapped down demands for a tax on sugary and salty food from his own eating tsar saying he was ‘not attracted’ to the idea of imposing the burdens. 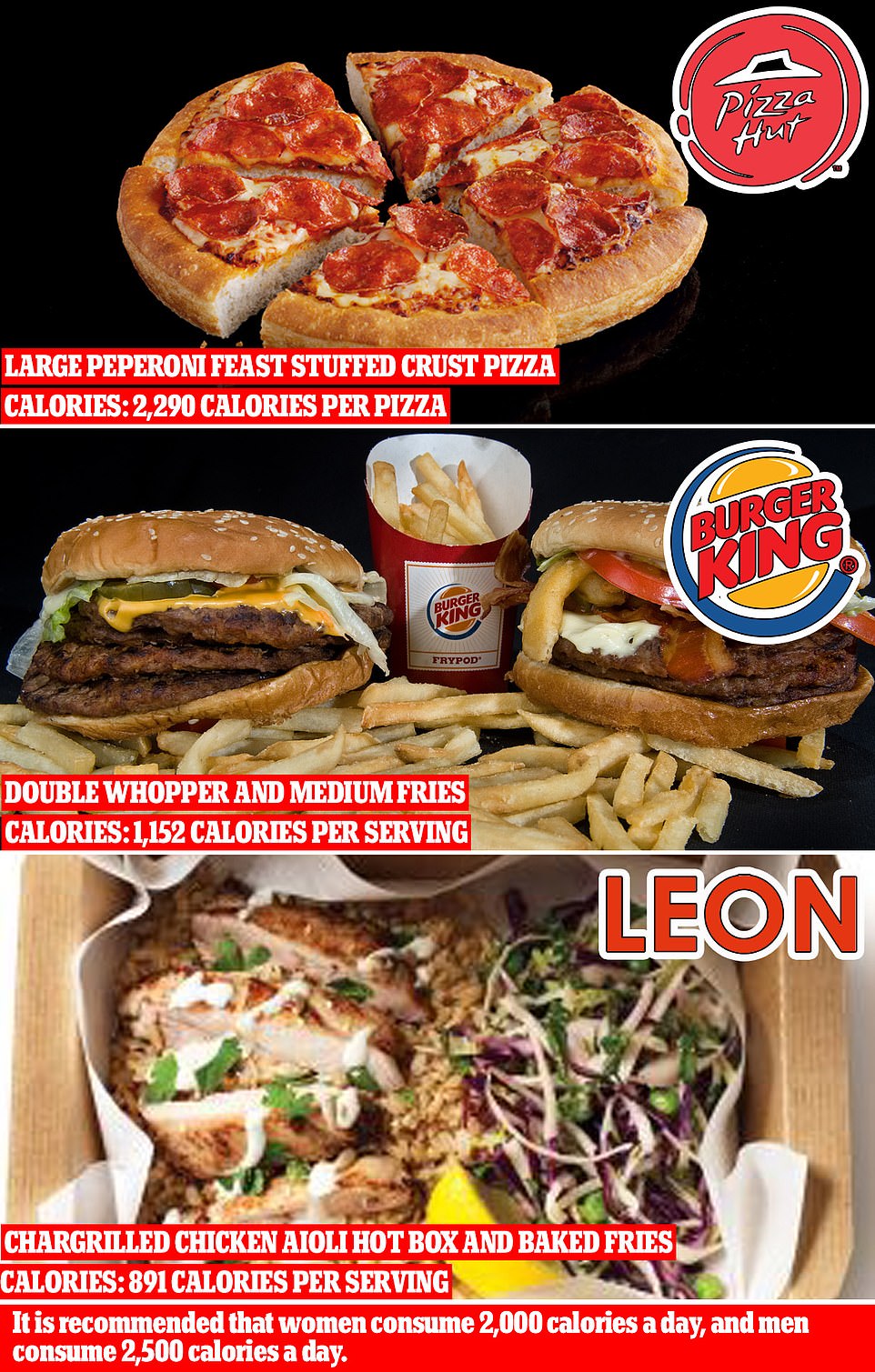 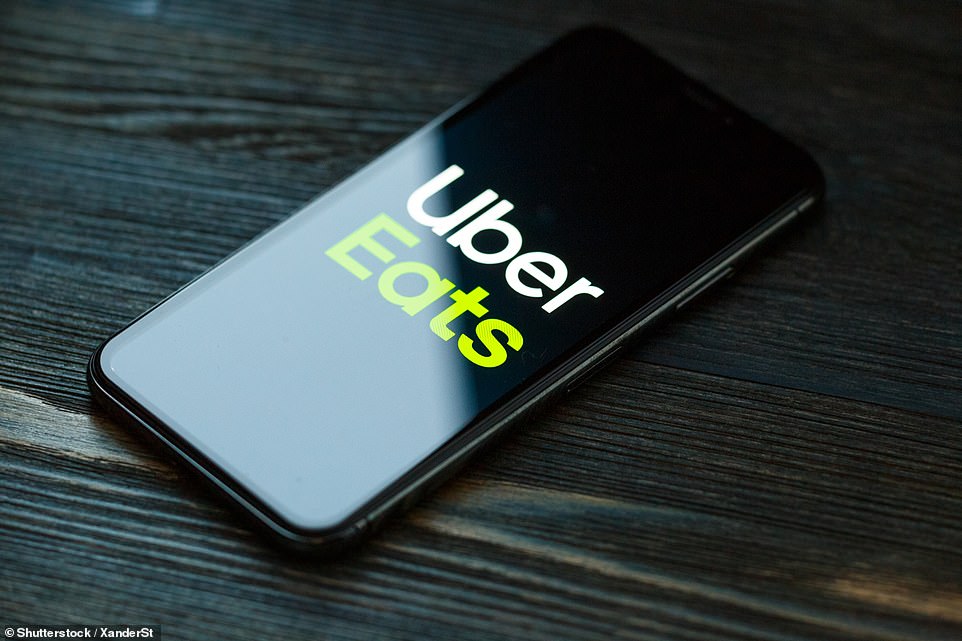 Uber Eats said Britons sifting through menus on Pizza Hut, Burger King and Leon would be confronted with calorie counts from next week

Uber Eat’s manager for the UK and Ireland, Sunjiv Shah, said: ‘It is more important than ever to focus on our own health in light of the Covid pandemic.

‘We want to empower our customers to make healthier choices. This is why we’re giving them the information they need to compare different meals and make an informed decision about what they order.’

For those ordering from Burger King a double whopper with medium chips contains more than 1,150 calories, or 57 per cent of the daily recommendation for women or 46 per cent for men.

And in Leon buying a chargrilled chicken aioli hot box with baked fries contains 891 calories, or 44 per cent of the recommended intake for women and 35 per cent for men.

The man who wants to increase the cost of Britons’ weekly food shop in a bid to force them to lose weight is a multi-millionaire who made his fortune selling ‘healthy’ fast food.

Henry Dimbleby, 51, is the son of BBC broadcaster David Dimbleby – and grandson of the late war correspondent Richard Dimbleby – was educated at Eton College and Oxford before becoming a gossip columnist and management consultant.

And despite his weight loss plan for the British public that includes calls for them to pay more and eat more algae, Mr Dimbleby admits struggling with his own weight and says he ‘oscillates’ between ‘the high end of healthy weight and the low end of obese’.

Before becoming Boris Johnson’s food tsar, married father-of-three Mr Dimbleby made a multi-million pound fortune in April with the sale of his fast food chain Leon which went for a total of £100million.

The upmarket chain, which he founded with fellow management consultant John Vincent and chef Allegra McEvedy in 2004 now has 61 stores in the UK, promotes a healthy image and is known for its halloumi wraps and aioli chicken.

However, nutritionists have pointed out some items on the menu which include ‘hot boxes’ are high in fat and salt – while its outlets, most of which are in London, also sell traditional fast food staples such as chips and burgers.

The number of calories in every meal is already displayed on Burger King’s website, and attached to most dishes sold on Leon’s online menu.

But Pizza Hut website users currently need to search for calorie counts before they can find out how health their choices are.

Jo Churchill MP, Public Health Minister welcomed the move, saying: ‘This is an enormously important step by Uber Eats, and the restaurants they work with, to help customers make informed choices about the food they eat – well ahead of next April’s deadline. I was pleased to see this action.’

Uber Eats delivers to more than 100 towns and cities across the UK, and has more than 10,000 restaurants listed on its app.

A report by the Food and Drink Federation (FDF) warned last month that hard-pressed British families will see an extra £160 slapped onto their annual shopping bill because of Boris Johnson’s crackdown on obesity and plastic.

They said firms faced £8.3billion in extra costs over the next three years as a result of schemes aimed at slimming the country’s waistline and making the UK more sustainable.

These included the Government’s tax on sugary drinks and ban on daytime advertising of fatty foods and buy one get one free junk food offers.

Mr Johnson has previously slapped down demands from his own eating tsar for a tax on sugary and salty food amid fury over ‘nanny state meddling’.

Answering questions at an event in Coventry last month, the Prime Minister said he was not ‘attracted’ to the idea of imposing new burdens on hard-pressed families after critics condemned the policies of Leon founder Henry Dimbleby.

‘I am not, I must say, attracted to the idea of extra taxes on hard working people,’ he said.

Leon’s founder and Oxford University graduate Mr Dimbleby was mired in criticism last month after he led the charge for a ‘fat tax’ — despite meals at his former fast food chain being laden with more calories, salt, fat and sugar than their equivalents at McDonald’s and KFC.

Leon’s version contain 371 calories, 21g of fat and 1g of salt compared to the 260 calories, 13g of fat and half a gram of salt found in a standard box of six McNuggets.

Mr Dimbleby, who was also educated at Eton, had called for a tax to be slapped on junk food high in sugar and salt in a controversial report commissioned by No10.

He said the move was essential to get a grip on the country’s growing obesity epidemic, although Mr Johnson swiftly slapped down his proposals amid outcry at ‘nanny state meddling’.

The Government’s healthy eating drive comes after Boris Johnson almost died from Covid, which the Prime Minister has blamed on his then-large waistline.

Mr Johnson has since committed to losing weight and regular exercise. He also reportedly told friends ‘don’t be a fatty in your 50s’.