Dunedin: Treasured fossilised whale bones thought to be about 23 million years old have been removed from the bank of a river on New Zealand’s west coast by a group who allegedly lied about having permission to do so.

Two men and a woman were spotted on the shore of Little Wanganui River, about an hour and a half north of Westport, with a rock saw and chisel on Sunday. 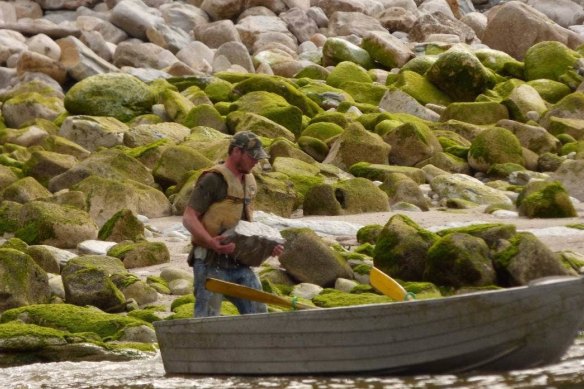 Locals photographed the men removing the 23 million-year-old fossil and loading it into a boat.Credit:Stuff.co.nz

They cut the fossil from the rock before it was taken away by boat. It is unclear whether its removal was illegal or not however police on Wednesday were taking statements from locals who saw the incident.

Multiple people confronted the trio with questions, but local resident Peter Lei said because it was a long weekend in New Zealand, their claims couldn’t be checked with local authorities.

“They’ve kicked the hornet’s nest with this one … They stole from the wrong community,” he said.

“I yelled at them from across the river, asked them what they were doing,” said another local, Tom Horncastle​, who confronted the group separately to Lei. 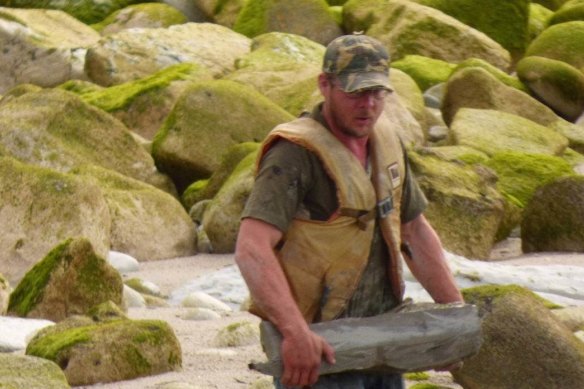 Locals confronted the men who told them they had permission to remove the fossil. Credit:Stuff.co.nz

Stuff understands the man photographed loading the fossil onto a boat has a large private collection of rocks and fossils.

The man, whom Stuff has chosen not to name, had shared photos of his collection online and had left locals afraid that he intended to sell or keep the taonga for his private collection. He has not responded to requests for comment.

Horncastle had visited the fossil several times with his father, children and grandchildren across his 67 years, making a special trip of it as it could only be accessed during certain weather and tide conditions.

“I’m a rough sort of dude myself, but this is deeply troubling. It’s just wrong.”

Horncastle fetched his boat to go and talk to the trio, saying that in his gut he knew they were trying to take the local taonga.

“When we approached, they came towards us with a steel chisel, it was pretty confronting.”

Horncastle was told by one of the men that they had permission from the local Maori tribe, or iwi, but according to Ngāti Waewae chairperson Francois Tumahai​, that wasn’t true.

One of the men was reportedly wearing an outdated Department of Conservation shirt, which a local and former DOC worker said he recognised.

Jacob Fleming, the acting operations manager at DOC Buller, said the man had no known connection to DOC.

Visiting the fossil was a tradition Karamea locals had enjoyed for several generations.

Tane Franken​ said the removal “affected me deeply … The connection was spiritual, really.”

“It’s in a place that’s not that easy to get to. If the tide is right and the weather is right, you can swim or wade across the river. It’s a real adventure when you’re a child.

“My father took me to them, and I hoped my children could take their children one day. I feel a real sense of loss that I can’t show it to my future grandchildren.”

He said although fossils could be seen in a museum, having one on your doorstep still embedded in the ground was “truly magnificent”.

“No one owned it. It was never damaged or vandalised … Every single person who has grown up in the area treated it with respect … There was no legitimate reason [to remove it] apart from personal gain.”