The Cats’ premiership has sent spirits soaring and cash tills ringing across Geelong, with businesses riding a wave of elation as fans streamed into the regional city.

Business owners expect the good times will continue for at least another few days as the premiership parade rides through Geelong’s waterfront on Tuesday and some people extend their long weekend to soak up the victory. 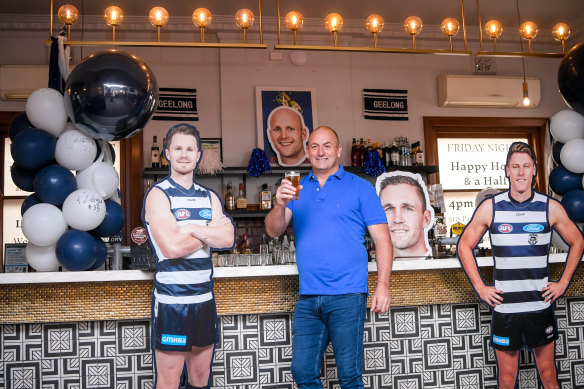 Belmont Hotel owner Simon Farrell said his business enjoyed a spike in sales thanks to the Cats’ success. Credit:Justin McManus

Supporters packed into pubs across Geelong on Saturday to watch the match and celebrate afterwards, and many others poured into the streets of the CBD to join thousands of revellers.

Farrell estimated his business generated an extra $10,000 on grand final day, which was three times more than sales would be on a grand final weekend when Geelong was not playing.

He said that more than 200 people packed into his pub on Saturday and spending levels were similar on Sunday, when supporters returned and watched the grand final replay. 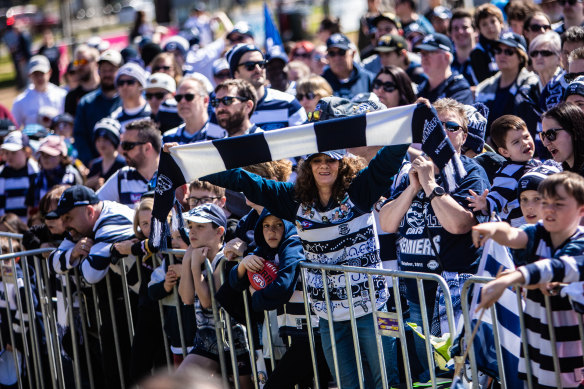 Westend Hotel publican Cameron O’Keefe said his business and many others in Little Malop Street were particularly busy both in the days before the grand final and over the weekend.

“I hope it’s going to continue over the next couple of weeks as well,” he said. “If ever there was a reason for people to celebrate, this is as good as it’ll get.”

Andrew Clark, who owns three pubs across Geelong, estimated sales had doubled over the weekend.

The Wharf Shed, where the Geelong players held their Mad Monday function, is among the businesses Clark owns. He said the grand final win lifted the spirits and emotional wellbeing of the town, which was sorely needed after the extended COVID-19 lockdowns.

Clark said this boost in morale could not be measured in dollar terms.

But he expected people would be out in the city and spending money at local businesses for at least another few days.

“It will go on probably until the end of the week.” 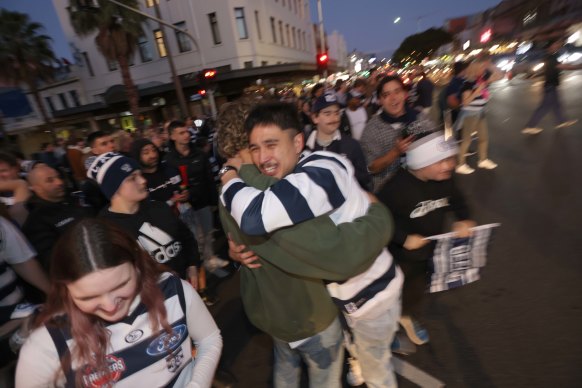 Fans celebrate on the streets of Geelong.Credit:Meredith O’Shea

And it wasn’t just the city’s pubs that did good business amid the celebrations.

Tourism Geelong Bellarine executive director Brett Ince said many accommodation providers reported they were booked out over the long weekend, although there was some availability on the Surf Coast.

He said businesses across the CBD and broader coastal region benefitted from the Cats’ win.

“When people are happy and they’re celebrating, they do spend more,” he said. “They stay a little longer. Some people have extended their stay because of the parade on Tuesday.”

Geelong Chamber of Commerce chief executive Ben Flynn said supporters streamed into the city for the club’s family day on Sunday, and while it was much quieter on Monday, he expected the parade would generate another revenue boost for businesses.

Hayden Spurling, former Geelong mayor and owner of menswear store Squire Shoppe, said sales had increased substantially, just as they had done following premierships in 2011, 2009 and 2007.

“There are certainly more functions and everybody wants to dress up because that makes them feel good,” he said. “The town feels good.” 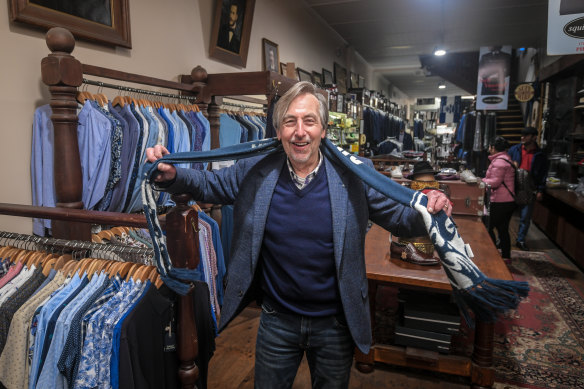 Spurling said sales started to improve when it became clear Geelong would be playing in the finals.

“You could see Geelong was playing so well [that] there was every chance they would be playing in a grand final.”

Committee for Geelong chief executive Jennifer Cromarty said the city was at a crossroads when the Cats last won a premiership in 2011, with the Ford manufacturing plant and Alcoa’s Point Henry smelter not far off closing.

“There was a lot of nervousness around the time of that grand final win,” she said.

Geelong’s population has since boomed and the city became increasingly cosmopolitan as it attracted major employers, including WorkSafe and the National Disability Insurance Agency.

Cromarty said the buzz would continue for at least another week and this would be accompanied by increased spending at local businesses.

“What I’m hearing is everything is absolutely packed out.”