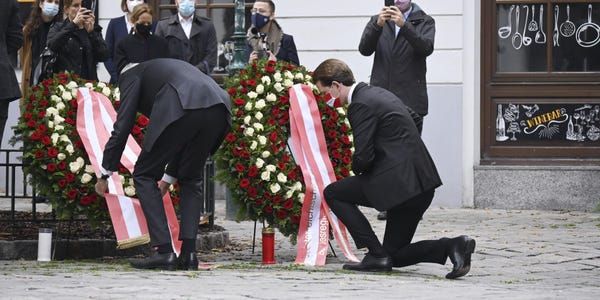 The perpetrator of the Vienna shootings on Monday night, who was once jailed for trying to join ISIS, had been discharged from a deradicalization program by tricking his mentors into thinking he was reformed, Austria has said.

Authorities have named the gunman as Kujtim Fejzulai, a 20-year-old dual Austrian and North Macedonian dual citizen of Albanian ethnicity. They currently believe he acted alone, according to the BBC.

Fejzulai was jailed for 22 months in April 2019 — for trying to travel to Syria to join ISIS — but was freed early in December 2019 under juvenile law, Kleine Zeitung and the Associated Press reported.

On Tuesday afternoon, Austrian interior minister Karl Nehammer said Fejzulai was discharged early under the condition that he would be monitored by a deradicalization program called Derad, and that Fejzulai had duped his mentors into believing he had been successfully reformed, The Guardian and The Times of London reported.

According to The Guardian, Nehammer said Fejzulai created an impression that he had deradicalized and wanted to reintegrate into Austrian society, "all while being focused on destroying the system."

"We are seeing a fault line in our system. There was a premature release of a radicalized person," Nehammer said, according to The Guardian.

"Fact is: the terrorist managed to deceive the judiciary's deradicalization programme."

According to The Guardian, the director of Derad, Moussa al-Hassan Diaw, has rejected reports that his program had declared the Vienna attacker safe.

He said Derad provides reports on bimonthly meetings with suspect individuals that Austrian courts could consult, adding: "Until a deradicalization program is stopped completely, there is always an element of risk," according to The Guardian.

Vienna Police said on Twitter on Tuesday that a total of 18 houses had been raided and 14 arrests had been made in connection to the attack.

The attack started at 8 p.m. and ended at 8:09 p.m. when Fejzulai was shot dead by police, The New York Times reported.

The four victims of the attack were "an elderly man, an elderly woman, a young male passerby and a waitress," Austrian Chancellor Sebastian Kurz said Tuesday, according to The Guardian.

Nehammer said on Tuesday that Fejzulai "was equipped with a dummy explosive belt and an automatic long gun, a handgun, and a machete."

Kurz said in a Tuesday-morning tweet: "It was an Islamist terrorist attack. It was a hate attack. Out of hatred for our core values."

The shooting centered around Vienna's busy nightlife district, which is also near the city's largest synagogue. Monday was the last day Austrians could visit bars and restaurants before the country's new coronavirus lockdown went into place.

As Insider has previously reported, deradicalization programs vary in their efficacy.

Countries like Denmark, Malaysia, and Saudi Arabia have seen demonstrable success in their national programs.

However, the UK has seen a number of terror attacks perpetrated by people released from their programs.

The killings in Vienna appear to be the latest in a new flurry of terrorist attacks to hit Western Europe this autumn.

Those attacks appeared linked to recent moves by France to regulate Islam, amid a clash between Muslim leaders and Emmanuel Macron over radical Islam and the publication of the insulting cartoons.