Revealed: The Swedish climate change academic who inspired the ‘Tyre Extinguishers’ campaign as eco-zealots target ‘hundreds’ of SUVs across the UK in bizarre war on air pollution from ‘gas guzzlers’

A Swedish climate change academic could be the inspiration behind a campaign of eco-vigilantism against SUVs in the UK.

Andreas Malm, an associate professor of human ecology at Lund University, has previously called for property damage to be used as tactics by climate activists.

He has even written a book on the matter, in which he says an anti-climate change movement should ‘damage and destroy new CO2-emitting devices’.

These words could be the inspiration for climate activists who earlier this week damaged hundreds of SUVs across the country by deflating their tyres and leaving propoganda leaflets on the windscreens.

In his novel ‘How to Blow Up a Pipeline: Learning to Fight in a World on Fire’, Prof Malm critiques the use of non-violence by activists and argues sabotage is a valid tactic.

Prof Malm, who has been described as a ‘Marxist’, goes so far as to call on a movement of millions of people to ‘announce and enforce the prohibition’ on new CO2 producing devices. 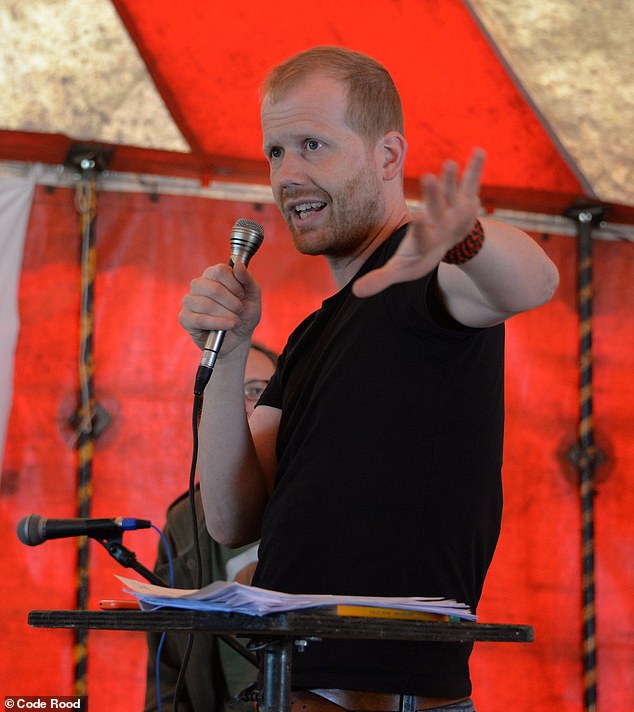 Andreas Malm, associate professor of human ecology at Lund University, speaking at a climate rally in the Netherlands in 2018. The academic has said sabotage is a valid tactic of the anti-climate change movement 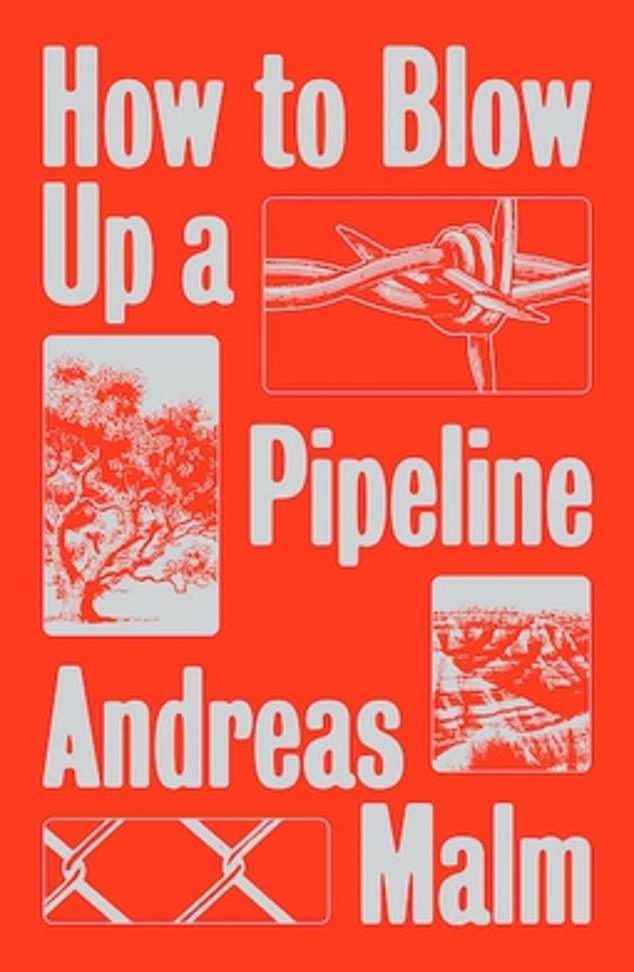 In his book ‘How to Blow Up a Pipeline: Learning to Fight in a World on Fire’, Prof Malm calls on climate change activists to ‘damage and destroy new CO2-emitting devices’ 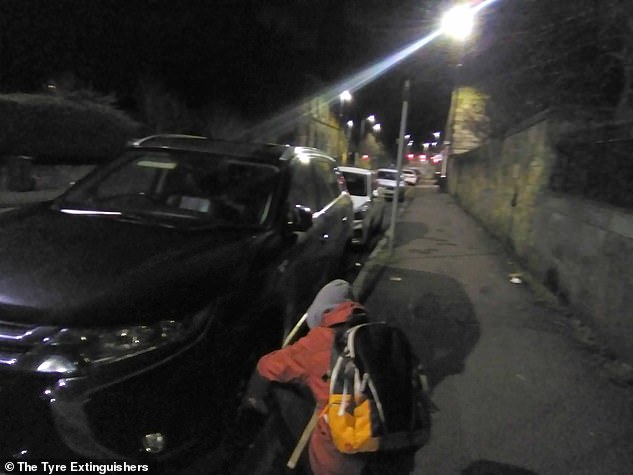 A Swedish academic, Andreas Malm has come to prominence in recent years for his climate change activism.

An associate professor of human ecology at Lund University, he has written multiple books on climate change, its effects on society and the influence of capitalism.

Described as a ‘Marxist’ by the International Socialist Review, Prof Malm has done numerous tours promoting his work and climate activism around Europe, as well as speaking at climate rallies.

In his 2021 book ‘How to Blow Up a Pipeline: Learning to Fight in a World on Fire’, he argues more activists need to move beyond non-violent protest to force action on climate change.

According to its publisher, Verso Books, it offers ‘a counter-history of how mass popular change has occurred, from the democratic revolutions overthrowing dictators to the movement against apartheid and for women’s suffrage’.

By doing this, it says he argues ‘the strategic acceptance of property destruction and violence has been the only route for revolutionary change’, something that must be extended to climate change activism.

On his university profile, he says he is currently researching the ‘role of the far right in the climate crisis’, something he explored in his most recent book ‘White Skin, Black Fuel: On the Danger of Fossil Fascism’.

In the book he says: ‘Put them out of commission, pick them apart, demolish them, burn them, blow them up.

‘Let the capitalists who keep on investing in the fire know that their properties will be trashed’.

Prof Malm has also given his approval to a 2007 campaign by activists in his native Sweden which saw at least 1,500 cars have their tyres deflated and leaflets left on their windscreens.

And it seems like some people in UK have taken the message to heart, with almost identical tactics used just this week by a group calling itself The Tyre Extinguishers.

Earlier this week MailOnline reported that the group, which says it has no leader, has been indiscriminately targeting 4x4s regardless of whether they were fuelled by petrol, diesel or even electricity.

The group let down the tyres of the SUVs across the UK during the night with their goal being to  ‘make it impossible to own an SUV in the UK’s urban areas’ because they create ‘unnecessary luxury emissions, flaunted by the wealthy’.

These tactics left owners enraged, particularly those who had stumped up to buy electric vehicles in an effort to be more environmentally conscious.

Leading thinktank Policy Exchange has said the police should be doing all they can to stop this campaign.

It said: ‘This is a really nasty campaign, involving criminal activity and the damaging of people’s cars, and it is of serious concern that Mr Malm appears to have been successful in getting it off the ground here.

‘It’s absolutely vital the police take proper enforcement action, and don’t just sit on their hands as they’ve seemed to with other climate protests.’

The activists who appear to have been inspired by his words say they are acting as ‘concerned citizens’ by deflating tyres on hundreds of SUVs in what they called ‘well-to-do areas across the UK  including London’s Chelsea, Belgravia, Clapham and Notting Hill.

However, in the process they also targeted electric vehicles, much to the disgust of their eco-conscious owners. 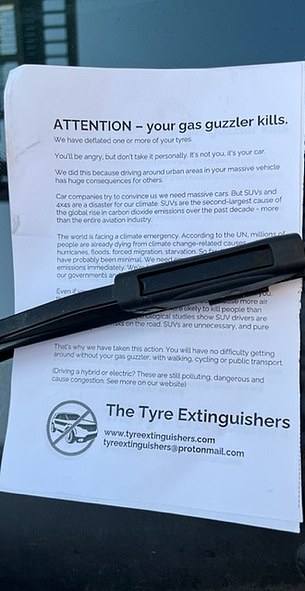 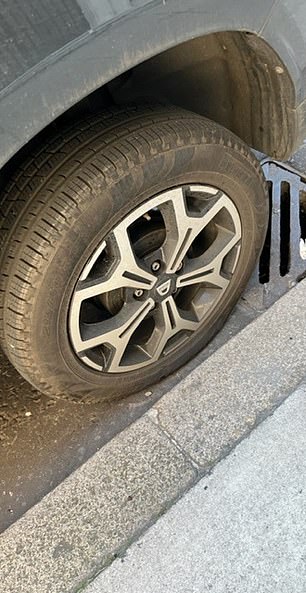 This car was targeted in Duchess Street, London, by the Tyre Extinguisher eco activists 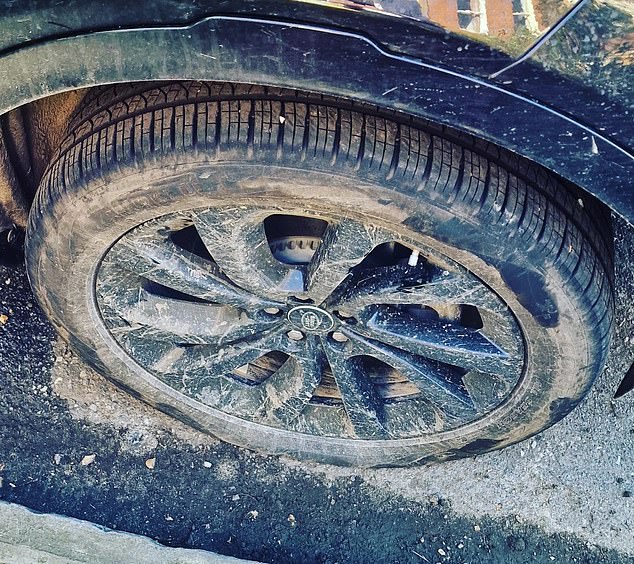 Pictured: William Lowe’s tyre, muddy from its use on a farm, was reduced from 50psi to 7psi

Legal experts say that although prosecution is unlikely, the activists could actually be committing a criminal offence.

Laura Baumanis, a criminal defence solicitor at legal defence firm Olliers, told MailOnline: ‘Whilst it is extremely rare for someone to be prosecuted for letting the air out of a tyre, technically, it could be classed as criminal damage.

‘For this offence to be satisfied, any damage caused does not have to be permanent, but is made out by virtue of the fact that steps need to be taken, ordinarily at expense to the owner, for the item to be in a working condition again.’

Meanwhile, Matthew Nash, tutor at The University of Law, said if the driver failed to notice the flat tyre and drove away, more serious charges could be brought it they crashed.

He said: ‘Letting out air from someone’s tyres is clear criminal damage.

‘It is possible that if they let the air out of someone’s types so as to cause an accident, there could be more serious charges depending on the resulting damage or injury.

‘It is also possible that there could be other offences if this were done to many cars at the same time.’

Three police forces have confirmed they are investigating multiple reports of criminal damage in Brighton, Liverpool and Cambridge.

Other areas outside of the capital include Brighton, Bristol, Cambridge and Edinburgh.

Targeted vehicles were then slapped with a lengthy leaflet, detailing the group’s motives, telling drivers not to ‘take it personally’ and lecturing them on why they should use public transport.

One electric 4×4 owner who was targeted in the night claims he went to great lengths to research the environmental impact of his vehicle before purchasing it.

William Lowe, from Cambridge, told MailOnline: ‘I was just leaving the house this morning ironically to attend a sustainability and waste reduction meeting when I noticed the tyres on my electric 4×4 had been deflated and I found their leaflet on my windscreen.

‘I was lucky enough that I had the means to reinflate the tyre at my house so it was only a mild inconvenience which set me back on my day but nevertheless it was very frustrating.

‘We use it for its intended purpose as we have to visit a farm at least twice a week which would otherwise be impossible for a normal car.

‘This is by far the car with the lowest carbon footprint. We were very conscious about that. We’ve been responsible and went to great lengths to research the environmental impact – it’s not like I just purchased the cheapest option.

‘It definitely seemed like the group are using a blunt tool to tackle what is actually a complex problem.’

He added: ‘I’m obviously sympathetic to their cause. The environmental situation is dire and needs answering but it’s a complex and nuanced situation that minor acts of vandalism show no signs of improving.

‘This is an important cause but they seem aligned with Extinction Rebellion who are uniquely placed to rally people against the cause they’re trying to unite people behind.’

Marion Walker from The Tyre Extinguishers said: ‘Governments and politicians have failed to protect us from these massive unnecessary vehicles.

‘SUVs are a climate disaster, they cause air pollution and are dangerous for other road users. Everyone hates them, apart from the people who drive them.

‘We have no leader – anyone can take part, wherever you are. Join us.’

Pictures shared by the group show that they left leaflets on the vehicles they targeted which told drivers to use public transport.

The leaflet reads: ‘Attention – your gas guzzler kills. You’ll be angry, but don’t take it personally. It’s not you, it’s the car.

‘We did this because driving around urban areas in your massive vehicle has huge consequences for others.’

Calling SUVs ‘pure vanity’, it tells the driver they will ‘have no difficulty getting around without your gas guzzler, with walking, cycling or public transport.’ 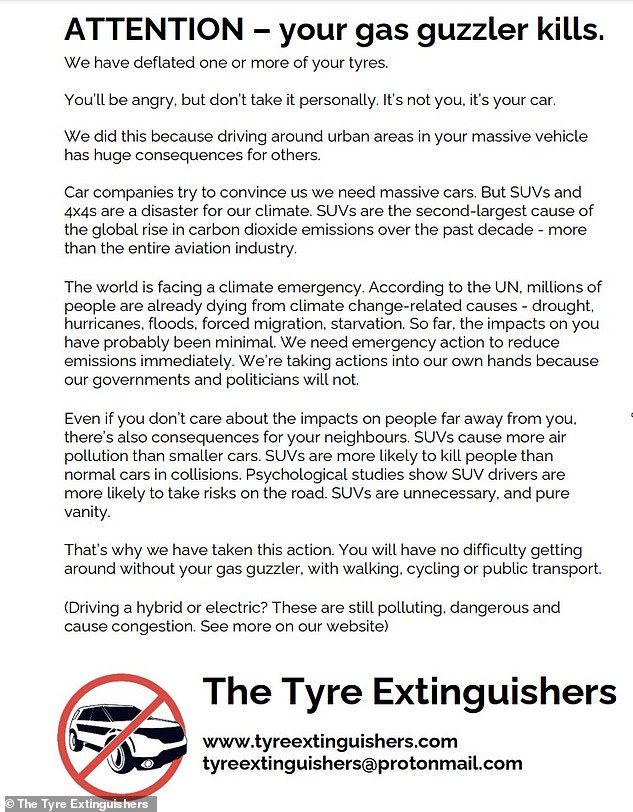 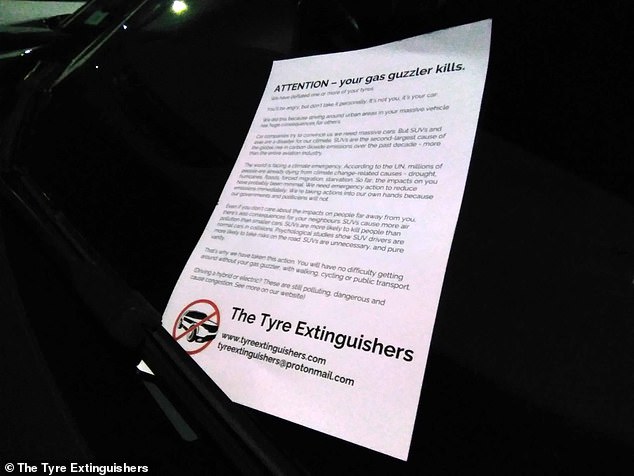 The group papered targeted vehicles with this lengthy leaflet (pictured), lecturing drivers on why they should get rid of their ‘gas guzzling SUVs’ and use public transport instead

The Tyre Extinguishers claim air pollution is racist because people of colour live in areas more likely to be exposed to toxic air and ‘SUV drivers tend to be richer and therefore tend to be white’.

The group cite the International Energy Agency’s findings in 2019 which reported that SUVs are the second largest cause of the global rise in carbon dioxide emissions over the past decade.

They also claim SUVs are more dangerous because they are more likely to kill a pedestrian and cite unknown psychological studies which found SUV drivers take more risks, ‘putting other road users and pedestrians in danger’.

In a statement shared this morning, it adds: ‘SUVs exist purely for the vanity of their owners, who see them as a status symbol.

‘For the sake of this vanity and conspicuous consumption, climate change is made worse, we breathe in polluted air, and more people die in accidents. This is unacceptable.’

Calling on a ban on SUVs in urban areas, pollution levies to tax SUVs ‘out of existence’ and ‘massive investment in free, comprehensive public transport’, the eco mob say they will continue until politicians take action.

Multiple police forces, including the Met, have said they are investigating what has happened.