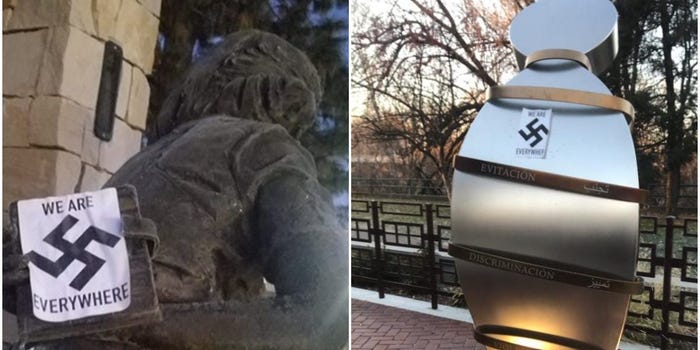 Officials in Boise, Idaho, have launched an investigation after a bronze statue of Jewish diarist and Holocaust victim Anne Frank was defaced with swastika posters earlier this week.

The Wassmuth Center for Human Rights, which built the memorial in 2002, posted photos on Facebook showing the life-sized statue bearing a sticker with a swastika symbol and a message that read: "We are everywhere."

It is the only Anne Frank memorial in the United States.

Flyers were also found on other parts of the memorial, including the information board and a sculpture called "The Spiral of Justice."

They were all found by a visitor who went to the memorial on Tuesday morning.

"What makes this event actually so sad was the blatancy where [the stickers] were placed, how they were placed, and the message they were proclaiming," Dan Prinzing, executive director of the Wassmuth Center for Human Rights, told the Associated Press.

The fact that the incident occurred just before the Jewish festival of Hanukkah made it even more painful, he added.

"I think what we're seeing, we have to take seriously — such acts aren't just random," Prinzing continued, according to AP. "In the sticker, they are proclaiming that they are everywhere. We have to remind people that good people are everywhere, that good exists, and now is the time for good to come together."

Boise Mayor Lauren McLean called the defacement "truly horrific" in an online news conference on Thursday, adding that officials will do "everything in our power to protect the residents and hold true to who we are as a community,"  according to CBS News.

"We take all instances of hate and hate messaging seriously," the Boise Police Department said in a statement published on Wednesday. "We are committed to ferreting out individuals who would sow hate in our community and seek to cause harm."

The stickers have since been removed and replaced with flowers and messages of support.

"Tonight, this is the statue of Anne Frank! Tell me that this is Boise! Hate does not win," the Wassmuth Center posted on Facebook on Thursday.

This is not the first time the memorial has been vandalized. In 2017, it was found covered in racist and anti-Semitic graffiti that caused $20,000 in damage, the AP reported.

Over the summer, neo-Nazi symbols were also seen among counterprotesters at a Black Lives Matter rally in Boise, Buzzfeed reported.

The site is one of just a few places in the world where the entire text of the Universal Declaration of Human Rights is on permanent public display.

Frank died in 1945 at the age of 15 at the Bergen-Belsen concentration camp.