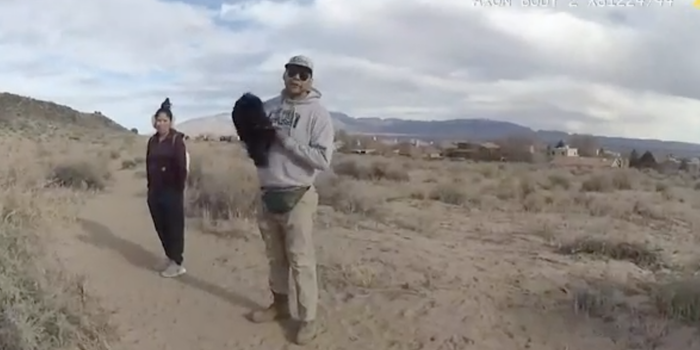 The National Parks Service (NPS) has launched an investigation after a park ranger at Petroglyph National Monument in Albuquerque, New Mexico, used a Taser on a Native American man who had strayed off a marked trail.

Body camera footage of the incident on Sunday was released by the NPS on Tuesday, showing an encounter between a park ranger, who has not been identified, and a man later identified as Darrel House, who told NBC News he is Oneida and Navajo.

The NPS said in a statement that House and his sister were walking among "petroglyph features off trail," on a "protected, sacred, archaeological site" where hiking is limited to trails in hopes of preserving the area.

House, however, told NBC News that he and his sister were on a walk at the national monument when he stepped off a trail to maintain social distance from a group of hikers.

He said he was approached by a ranger shortly thereafter, who told him to stay on the path.

Video from the NPS showed the ranger asking House for identification multiple times, and the NPS said that House initially refused, and gave a false identity and a false date of birth.

The officer warned House that he would detain him if he didn't give him a real identification, and as the situation escalated, the ranger used a Taser on him.

"I didn't see a reason to give my identification. I don't need to tell people why I'm coming there to pray and give things in honor to the land. I don't need permission or consent," House told NBC News. "And I don't think he liked that very much."

"This could have been a civil interaction," he said while sharing video of the incident. "The law doesn't work for the Indigenous. The government doesn't give a s— about us. This was uncalled for."

The National Parks Service is investigating the incident.

"That investigation will include interviews with the officers, those involved, and any other witnesses who were in the area at the time of the incident. Investigators will also review the video captured by one of the individuals and later posted to social media, as well as the body worn camera footage worn by the NPS law enforcement officer," the agency said in a statement.