Every weekday, for more than 20 years, Chris O’Neill put on his work clothes and caught a train from Melbourne’s outer suburbs to the CBD.

He was like tens of thousands of office workers across the city in skirts and suits whose daily commute was simply part of the deal in earning a wage. And then it all changed. 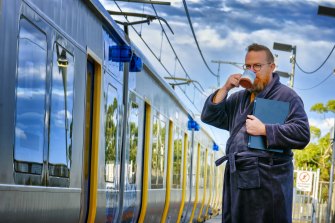 Chris O’Neill took the train to the city every day for 20 years, now he works from home.Credit:Luis Enrique Ascui

“You just did it, you didn’t question it. It was the way things were always done,” the 51-year-old policy officer says.

For decades, the veins and arteries of Melbourne’s rail network pumped people in and out of the city with a familiar rhythm. From Monday to Friday, in the morning and afternoon peak, the commute seemed eternal.

Habits formed around a return trip that could take several hours: the same carriage, the same faces, the same scenery. Housing choices were based on proximity to train stations. Often, the busiest lines strained under the load.

“It was lucky if you got on at the end of the line because at least you could sit down – some of the inner suburbs wouldn’t know what a seat looked like,” says Mr O’Neill, who used to take the train from Belgrave to Parliament but now lives in Officer.

If you boarded a metropolitan train recently, even the busiest service on the timetable, there’s a very good chance that you weren’t standing up no matter where you got on.

Remote work has done away with the commute for white-collar workers, as technology has allowed businesses and organisations to function without funnelling people in and out of the city’s office towers.

For the employees, there have been some obvious benefits: more time in the day, less money spent on train fares.

“Because this experience has never been undertaken at scale, there was a lot of uncertainty around whether it would work or not,” says Professor Jago Dodson, director of the Centre for Urban Research at RMIT.

“It’s been shown in many cases to actually be workable for people and have advantages.”

As with much of the pandemic, this shift has not been universal. Those in the hospitality, construction or retail industries have not been given the option of avoiding their workplace.

Nevertheless, it’s a radical change for a city that has made several assumptions around how its transport system will operate in the future – a key one being that the CBD will continue to be the centre of employment.

That hasn’t been the case for almost 18 months now, with office occupancy rates and transport passenger numbers reflecting the lack of people commuting. 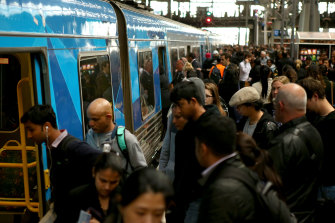 In times gone by: Commuters board a home-bound train at Southern Cross Station.Credit:Pat Scala

“From what we know at the moment, the five-day office week is not going to return in the short term,” says David Bissell, associate professor of geography at the University of Melbourne.

“Projecting forward, I doubt that most people will go back to that.”

Last Tuesday, metropolitan train patronage levels were 48 per cent of those pre-pandemic, according to Public Transport Victoria.

That was an increase from the most recent Victorian lockdown, when it was just 12 per cent. Passenger numbers have not gone higher than 50 per cent of “normal” levels this year. 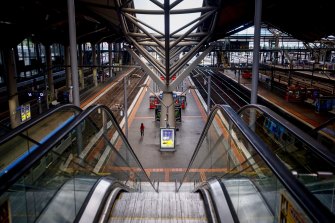 Southern Cross station on a Monday morning during one of Victoria’s lockdowns. Credit:Luis Enrique Ascui

Professor Graham Currie, chair of public transport at Monash University, is researching how people will move around after COVID-19.

He expects that public transport use will increase when the pandemic is over but it won’t go back to what it was before.

The biggest change will be among the office commuters, he says, who will have the greatest opportunity to work from home. 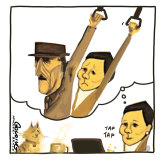 However, the shift may not be as significant as some expect. Professor Currie says his research suggests that one in five CBD jobs will be remote in the future.

It raises interesting questions about projects such as the $13.7 billion Metro Tunnel, billed as the first major upgrade of CBD rail infrastructure since the city loop in the 1970s and ’80s.

In 2016, the business case for Metro Tunnel forecast that weekday boardings on metropolitan trains would more than double to 1.5 million by 2031. It is expected to open in 2025.

Last Monday, Premier Daniel Andrews made his first public appearance since March 9 at the site of one of the new Metro Tunnel stations, highlighting the government’s focus on its infrastructure record.

“We were building Metro because people were falling out of the doors of trains,” says Professor Currie.

“When we come out of this pandemic, I still think we’ll need the infrastructure. It will still be valuable but we’ve bought some time.”

What is yet to be thrashed between bosses and workers is how many days people will spend in the office in the future. Some have already shown a resistance to going back to how things were before.

Office administrator Megan Brown said she would factor whether or not she could work remotely when looking for a new job.

She recently started commuting into the city two days a week from Newport after previously travelling to Flinders Street every weekday before COVID-19. “I think going back it’s quite exhausting,” the 44-year-old says.

“Working from home you’re not having to get up as early, you’re basically taking two hours off your day on the train.”

Many commuters would agree with Ms Brown’s assessment that it’s been nice during winter to not have to leave and get home from work in the dark.

“It’s such a waste of time, it can be better spent at home with our families and exercising,” she says.

But not everyone wants to bid farewell to the commute entirely. Chris O’Neill recalls studying for his masters on the train and also catching up on sleep when he had a new baby.

He also misses the nice cafes and restaurants in the city, as well as the shifts in the landscape the further you travel along the line. A couple of days in the CBD would be a good result, he says.

“Working from home has really blurred the lines between home life and work life,” he says.

“I think the thing about the commute is it really clearly defines those things. It’s my time to read. It’s almost like a pause, the thing that breaks the day.”