I didn’t need to move the albums at all. Leave it all for the removalists, my wiser one had told me.

No, I insisted these are fragile and valuable, the record collector in me replied. I could see from the half smile in reply, I was being indulged in my half logic. Fragile, yes. Valuable, hmm. 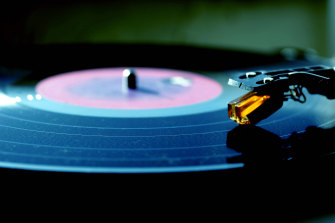 I was reluctant to leave my vinyl collection in the hands of the removalists.Credit:Louise Kennerley

I could argue that there were pieces of 120gm of vinyl from my teenage years, which made them personally valuable. Why here was Neil Young’s Journey Through the Past, the soundtrack to a film that never troubled audiences much. I tell myself I must have the only copy still in existence. It’s never been released on CD.

And here’s Richard Clapton’s first album Prussian Blue, with Clapton’s signature on it, when I asked him to sign it when I interviewed him a few years back. Only sold a couple of hundred, he laughed.

Pieces of music, pieces of time in a life, or time in a bottle. That’s the sentimental strain to the logic of keeping hundreds of vinyl albums. You pick up say, Young’s other neglected classic Time Fades Away, and think, I remember where I was, how old I was, and who I was when I bought it. Looking back though, the “who I was” bit was somewhat fluid.

This isn’t an argument against progress and the streaming of music, though the payments to musicians is criminally low (Springsteen bandmate Nils Lofgren once posted a royalty cheque he received for his songs. It was a couple of dollars.) 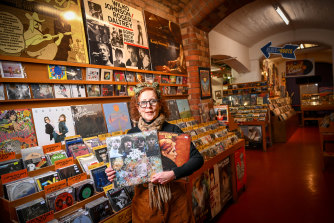 If there is an argument for Spotify and other streaming services, it’s that you’re never going to feel a twinge from lifting the service from one spot to the boot and then out again at the new home. There might be a twinge for the inferior quality of the music. But that’s progress eh? Lighter on the back and lighter on the sound quality.

There has been another twinge, too, this week, one of gentle happiness. Basement Discs, that cavern of musical delights in the city, has been given a saving hand through a crowdfunding campaign to remain open. Many are the times I’ve walked down its steps, to either buy or listen. Their lunchtime concerts were a treat. It was there I met a musical hero of mine, American blues singer-songwriter Chris Whitley.

My friend and colleague, the late Michael Gordon, used to return to the office from Basement with new CDs and say to me, hey mate, heard of this … Basement Discs recommended it to me. Sometimes I had, other times, no, but that is the joy of the place. It has an ear for music and people. Long may it run.

As for the moving of the albums, I’ll take it easy. Now where’s that Jackson Browne album?