Spain’s King Felipe and his mother Sofia have arrived at hospital to visit his father Juan Carlos I, as the former monarch undergoes scheduled heart surgery.

The 51-year-old was seen pulling down his sunglasses and smiling as he walked to the entrance of Madrid’s Quiron Hospital with his mother.

Palace officials said that the operation was arranged following a check-up in June and indicated that it was not an urgent procedure. 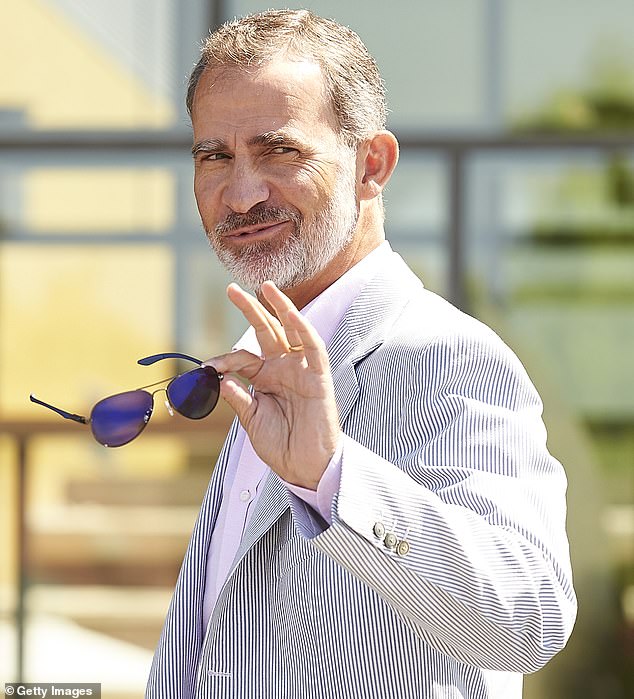 Spain’s King Felipe has been pictured arriving at hospital with his mother Sofia. His father is at the Madrid medical facility for a scheduled heart operation 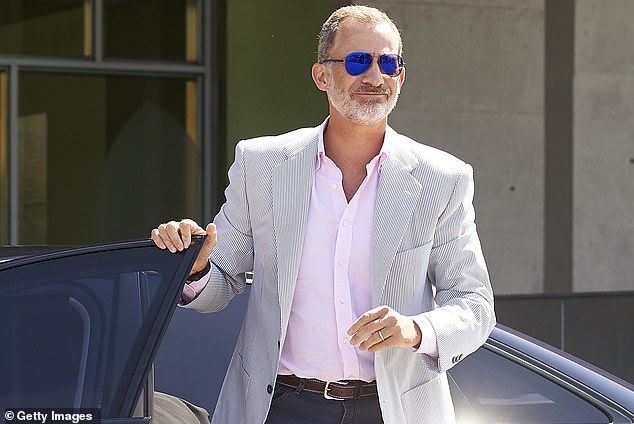 The 51-year-old looked suave as he stepped out of the car wearing a striped blazer, pink shirt and dark blue sunglasses 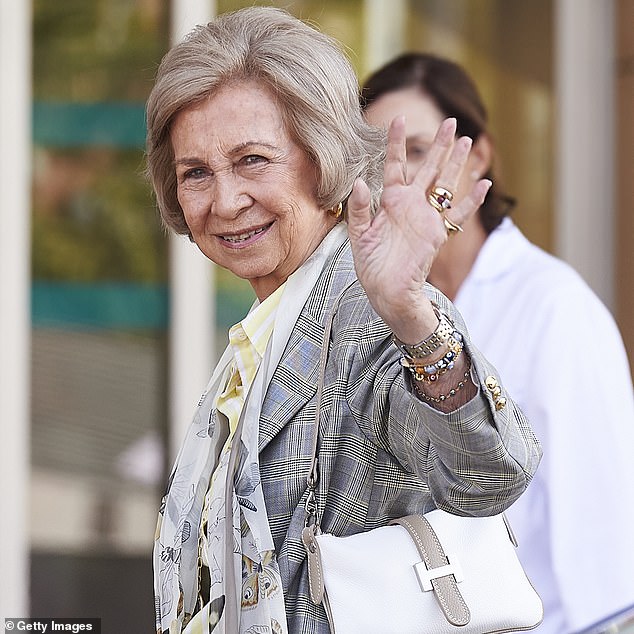 His mother Sofia was also well dressed in a striped blazer with yellow shirt and scarf as she arrived at the hospital in Pozuelo de Alarcon, Spain, were her husband is having the operation

Arriving at the clinic late on Friday he told reporters: ‘You’ll see me on the way out’.

The 81-year-old king emeritus retired from public life in May, after abdicating in 2014 in favour of his son, ending a 39-year reign.

Pictures showed his son looking suave as he stepped out of a black vehicle wearing a striped white blazer, pink shirt and dark blue sunglasses.

His mother, the emeritus Queen, was also well turned out in a striped blazer with a yellow and white shirt and scarf decorated with butterflies.

Revered by many Spaniards, Juan Carlos was considered a key figure in Spain’s transition from dictatorship to democracy following the 1975 death of General Francisco Franco. 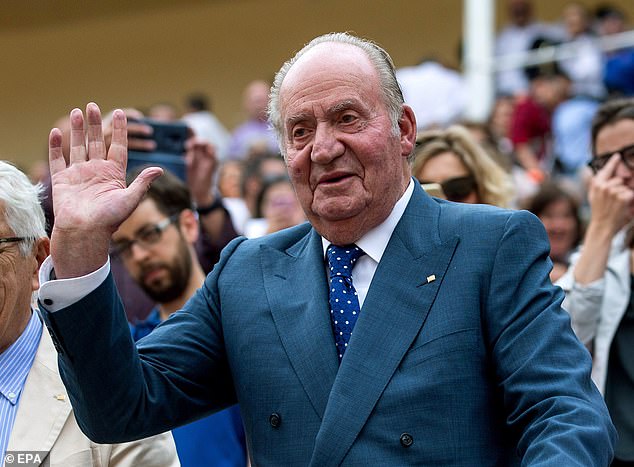 Former monarch Juan Carlos I resigned in 2014, ending a 39-year reign, to make way for his son. In May this year he announced his decision to retire from private life. (Pictured: The King Emeritus at a bullfight in Las Ventas bullring in Madrid, Spain, in June this year) 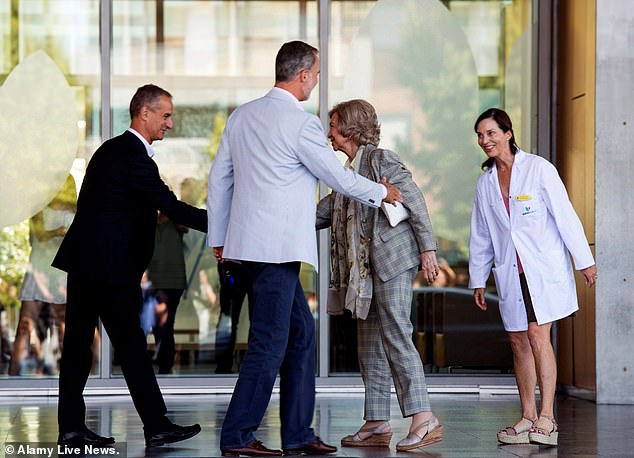 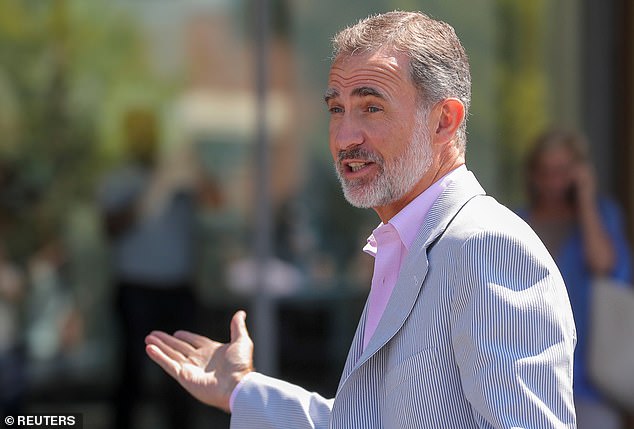 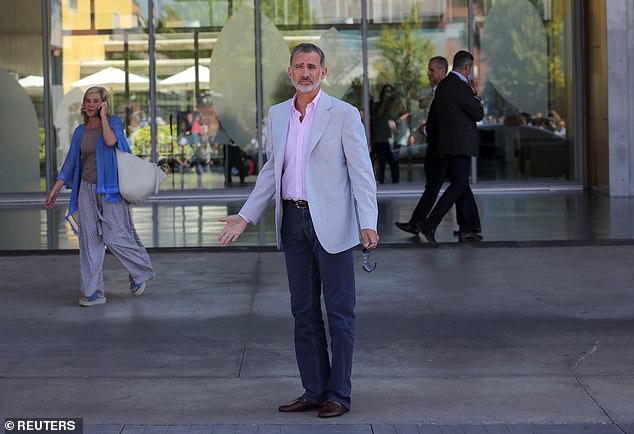 King Felipe pictured standing outside the hospital in Madrid, Spain, this morning 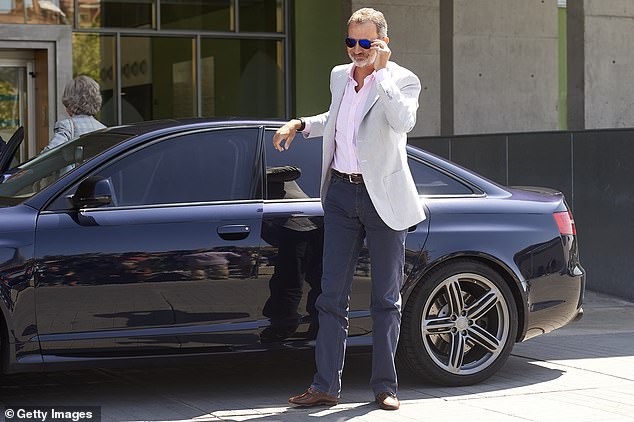 However, his reign was tarnished in later years by accusations that he was out of touch with ordinary Spaniards, especially during the 2008 to 2014 financial crisis.

Pictures showed his family arrive at the hospital and greet some officials before heading inside.