Backstage at any figure skating event, just before they leave the solitude of the tunnel and step out onto the ice, one of America’s top ice dancing duos makes time for a ritual that puts them in the right mindset to perform.

Here is where they share an intimate moment that is more than what it appears.

For almost a decade, Kaitlin Hawayek and Jean-Luc Baker have used an abnormally long hug to soothe their nerves, synchronize their breathing and get in unison before they compete. They say the pre-skate embrace helps them block out the cacophony of the arena and the pressure to win and focus solely on each other.

“Part of the reason we do it is to put ourselves in this little bubble where we just feel like we’re the two of us,” Hawayek told Yahoo Sports. “It helps us go from the macro perspective of being in a giant arena with lots of people to something much more small and personal.”

The hug will be an essential part of the ice dancing duo's pre-skate routine this weekend when they perform on their sport’s grandest stage. Hawayek and Baker will be making their Olympic debut in Beijing after serving as alternates four years ago but never seeing the ice.

While Hawayek and Baker say their hug developed organically, they are not the first ice dancers to employ such a ritual. Two-time Olympic champions Scott Moir and Tessa Virtue of Canada told TSN in 2017 that they share a preplanned hug before they perform to help them “find that synchronicity” and “solidify that trust” in each other.

Baker has studied the science of breathing and concluded that mirroring his partner’s breathing pattern can only help foster togetherness. He and Hawayek purposefully take deep, calming breaths during their embrace until their nerves are settled and their minds are clear.

“It’s not like if our breathing is off a bit, we can’t get on the ice,” Baker said. “We’re not counting 1-2-3 inhale, 1-2-3 exhale or anything like that. We’re really just trying to be as calm and present as possible and breathing together helps us do that.” 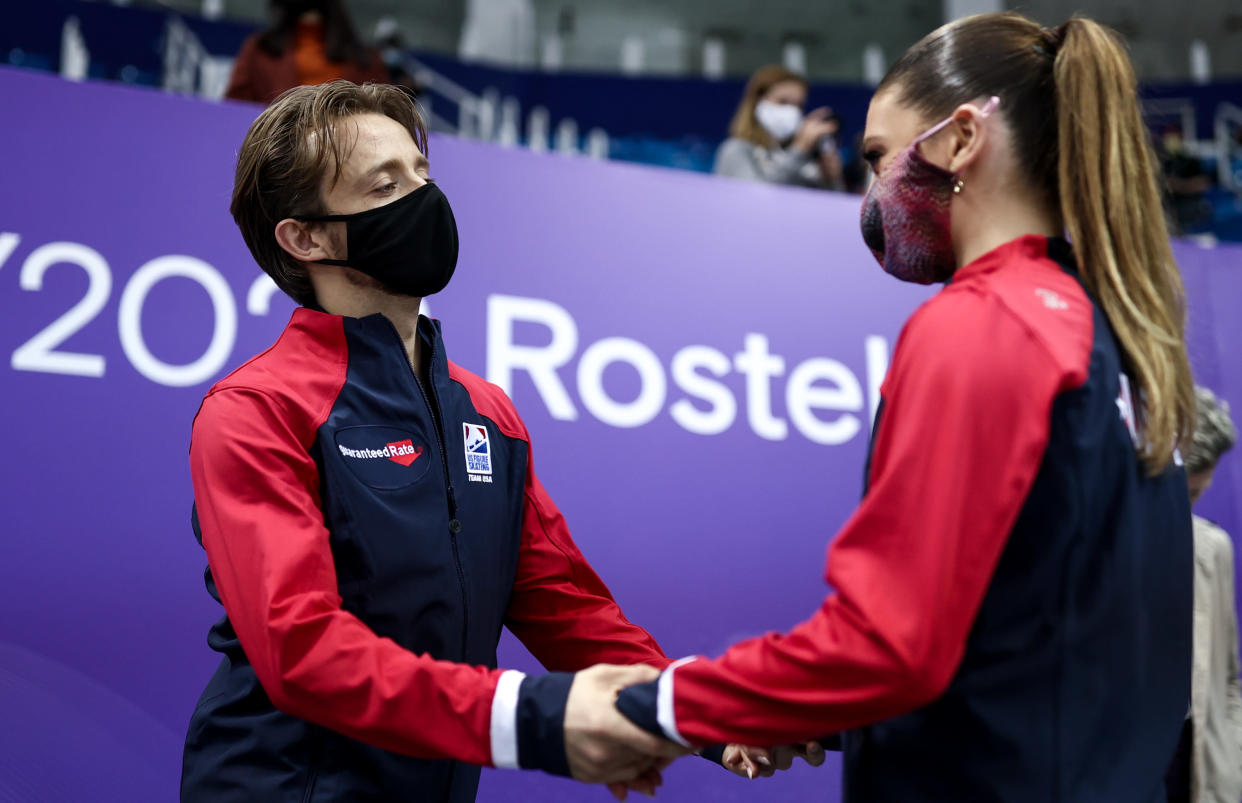 While Hawayek, 25, and Baker, 28, have both skated since soon after they were out of diapers, they were lucky to find each other. They lived on opposite sides of the country before a USA Figure Skating official saw something in their skating styles that meshed and suggested they consider partnering.

In 2012, Hawayek and Baker skated together for the first time to evaluate if they had chemistry on and off the ice. Quickly, they both realized they got along easily and moved fluidly together.

Says Hawayek: “It was almost like a door was getting unlocked and suddenly I could skate at a new level.”

Says Baker: “Within the first five minutes, I looked up at my parents and gave them a thumbs up.”

Their first season together was a whirlwind of change, but Hawayek and Baker had more time to experiment with new pre-skate routines in year two. It was then that they first incorporated their signature hug into their pre-skate ritual.

Hawayek and Baker had no reason to deviate from their routine after that because their 2013-14 season exceeded all expectations. Only a year and a half after they first became partners, Hawayek and Baker took first place at the 2014 World Junior Championships with a record-setting total of 157.12 points.

“From then on, we’ve kept doing it,” Hawayek said. “We felt like something was clicking and we never really looked back.”

While Hawayek and Baker have captured bronze at each of the past four U.S. Figure Skating Championships, their road to Beijing hasn’t been nearly as smooth as the consistency of those results suggests.

The tumult started at the outset of the pandemic when Hawayek and Baker decided to move in with her parents in East Aurora, New York, so that they could continue to train together.

In previous years, Hawayek and Baker tried to give each other space away from the ice since they spent so much time together while training. Living under the same roof during a time of quarantine complicated that arrangement.

“We were both awkwardly avoiding each other in the house,” Hawayek said, “not out of being rude but out of trying to be respectful. Eventually, we kind of found a rhythm but it’s really funny in hindsight. I think it shows how much we respect one another that we were trying to give each other our own space within the walls of one house.”

The way Baker sees it, their quarantine experience took their “partnership and friendship to a whole new level.” They were poised to keep ascending as an ice dancing duo until Hawayek sustained a concussion and received stitches to her head after a fall last July.

Baker and Hawayek battled back in time to not only perform at last month’s U.S. Championships but also eke out another third-place finish. That was enough to earn the tandem a long-awaited chance to compete at the Olympics.

“When we both got the calls, Jean-Luc and I met up in the hallway of our hotel by our rooms,” Hawayek said. “We ended up hugging each other for what felt like a couple minutes. We didn't really have words to say because we didn't need to say them.”

In Saturday’s rhythm dance, the pair posted a 74.58, good enough for 11th place and leaving them 12.55 points out of the medals. The two other teams from the United States fared better. Madison Hubbell and Zachary Donohue sit in third place with a score of 87.13. Madison Chock and Evan Bates sit in fourth with a score of 84.14. The free dance will be held Monday in Beijing.

Those, Hawayek and Baker hope, will calm their nerves, sync their breathing and pave the way for a performance of a lifetime.

“It’s pretty nerve-wracking to go out there sometimes,” Baker said. “You’re in a giant fishbowl. Everyone is looking at you. Sometimes you just need a hug.”