Moscow previously said 63 Russian soldiers were killed in the weekend strike. The ministry’s reaction came amid mounting anger among some Russian commentators, who are increasingly vocal about what they see as a half-hearted campaign in Ukraine.

Most of the anger on social media was directed at military commanders rather than Russian President Vladimir Putin. 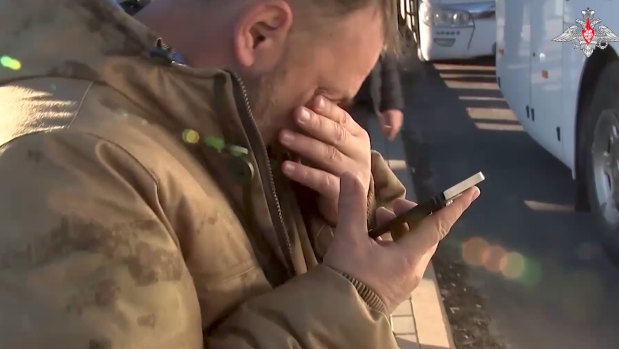 A Russian soldier reacts as he speaks on the phone with his relative after being released in a prisoners swap between Russia and Ukraine in December. Russia has blamed mobile phones for giving away its strategic locations to Ukraine.Credit:RDM/AP

The ministry said four Ukrainian missiles hit a temporary Russian barracks in a vocational college in Makiivka, twin city of the Russian-occupied regional capital of Donetsk in eastern Ukraine.

Although an official probe has been launched, the main reason for the attack was clearly the illegal mass use of mobile phones by servicemen, the ministry said.

“This factor allowed the enemy to track and determine the coordinates of the soldiers’ location for a missile strike,” it said in a statement issued just after 1am in Moscow on Wednesday.

Ukrainian President Volodymyr Zelensky made no mention of the attack in a video address in which he said Russia was set to launch a major offensive to improve its fortunes. 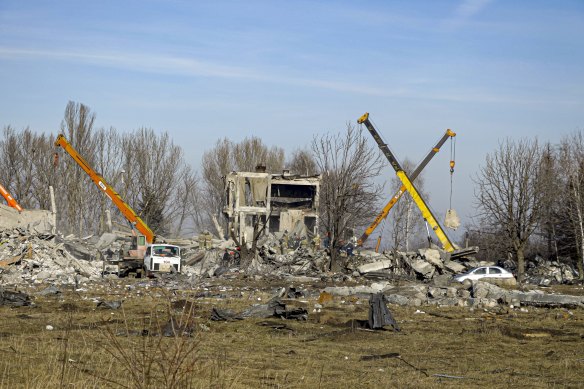 “We have no doubt that current masters of Russia will throw everything they have left and everyone they can round up to try to turn the tide of the war and at least delay their defeat,” Zelensky said in a video address.

“We have to disrupt this Russian scenario. We are preparing for this. The terrorists must lose. Any attempt at their new offensive must fail,” he continued.

Ukraine’s military has said it launched a strike that resulted in Russian loss of equipment and possibly personnel near Makiivka. But it has given no further details.

Russian nationalist bloggers and some pro-Russian officials in the region put the Makiivka death toll in the hundreds, though some say that those estimates are exaggerated.

The attack was another blow to Putin and what he calls a “special military operation” to deter threats to Russian security and to protect Russian speakers. Ukraine and its allies accuse Moscow of an unprovoked imperialist-style grab for territory.

General Valery Zaluzhny, commander in chief of the Ukrainian armed forces, said the situation on the front line near the eastern town of Bakhmut was particularly tough.

Russian forces have repeatedly tried to take Bakhmut and the surrounding area, in some cases literally advancing over the corpses of their own soldiers, Zaluzhny wrote on the Telegram messaging app, saying Ukrainian forces were hanging on.

A little known patriotic group which supports the widows of Russian soldiers is calling on Putin to order a large-scale mobilisation of millions of men and to close the borders to ensure victory in Ukraine.

Zelensky reiterated Ukrainian assertions that Moscow was planning a full-scale mobilisation, a step that Russian officials say is not currently being considered.

A US State Department spokesperson said Washington had seen reports “that the Ukrainian military struck a Russian military barracks that stored ammunition inside of Ukrainian territory” and led to many Russian deaths. “We have also read reports that many of these soldiers were new recruits”.

Putin planned to talk to Turkish President Recep Tayyip Erdogan on Wednesday, Kremlin spokesman Dmitry Peskov told Interfax, the latest in a series of conversations the two men have had since the start of the war.

Turkey acted as mediator alongside the UN last year to establish a deal allowing grain exports from Ukrainian ports but the chances of serious peace talks look remote, especially as fighting continues to rage.

Ukraine’s General Zaluzhny, summarising a Tuesday call with US Chairman of the Joint Chiefs of Staff General Mark Milley, thanked the American for helping ensure the provision of anti-missile weapons systems that Kyiv says is knocking out more and more of the Russian missiles aimed at power-generating plants.

Zaluzhny said he had discussed what equipment Ukraine needed to increase its chances against Russia, a message that senior officials have hammered on a daily basis.

“Right now is the moment when, together with our partners, we should strengthen our defence,” said Zelensky.

Meanwhile, British Prime Minister Rishi Sunak told Zelensky he could count on Britain for support over the long run “as demonstrated by the recent delivery of more than 1,000 anti-air missiles”, Sunak’s office said.