Eyebrows have been raised over a new commemorative £5 coin featuring Prince William – with royal fans claiming the image has been ‘hair-brushed’.

The Prince’s 40th birthday next month will be marked with a new limited edition gold coin featuring a 3D portrait of the future king.

The celebratory gold coin was created by designer and engraver Thomas T Docherty who set the Prince’s portrait in his royal cypher, with his initial W, and the number 40.

It is the first time the Duke of Cambridge, who is second in line to the throne, will appear alone on an official coin struck by the Royal Mint.

But eyebrows have been raised among social media users over the portrait, with some saying the Royal Mint has been generous with the Prince’s hairline.

One Twitter user wrote: ‘The £5 coin to mark Prince William’s 40th birthday has more hair than he does!’

Another Twitter user said: ‘They must have used a very old photo for his image the coin, he hasn’t had that much hair for many a year!’ 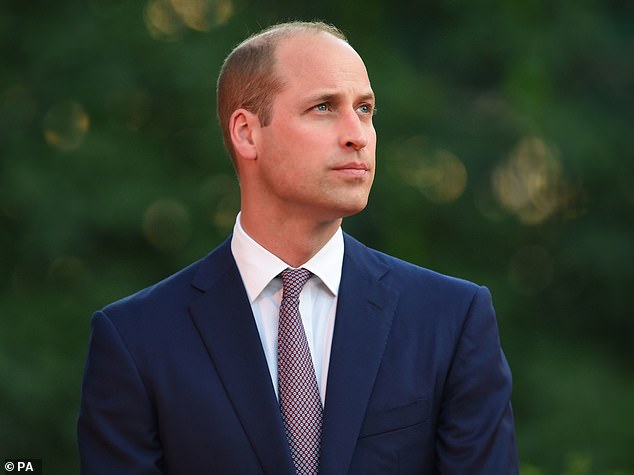 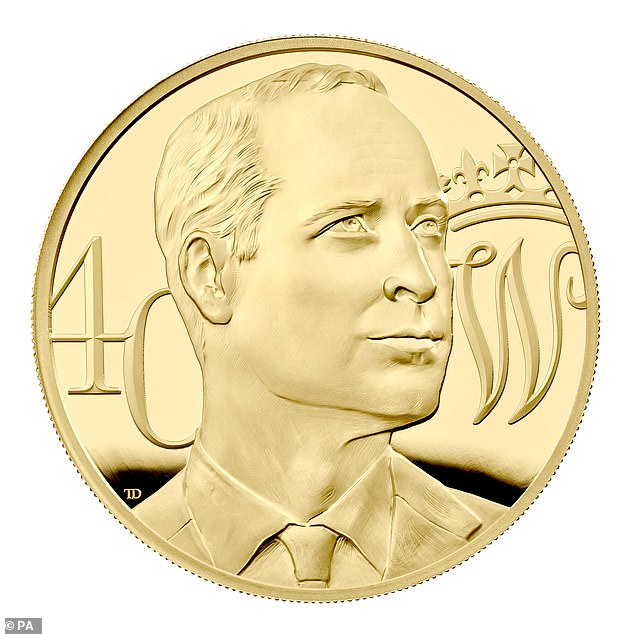 Daily Mail political commentator Andrew Pierce, wrote: ‘A £5 coin issued of #PrinceWilliam to mark his 40th is not so much airbrushed as hair brushed! Where did that that thick mane come from?’

Others compared the portrait to fictional characters, including balding antagonist Mr Burns from the Simpsons

Another compared the portrait to the Harry Potter villain Voldemort who in the film series – in which he is portrayed by Ralph Fiennes – has no hair or eyebrows.

Royal watchers have claimed the portrait of Prince William that will adorn the commemorative £5 coin unveiled ahead of his 40th birthday is a ‘very flattering’ image which makes him look younger than he is.

Royal author Phil Dampier told The Sun: ‘William will be pleased with this as they’ve given him more hair.

‘He looks younger than 40 so he won’t complain. He looks thoughtful but also like he’s looking for inspiration, which he will need in coming decades.’

Prince William strikes a noble pose on the commemorative coin – though designer and engraver Thomas Docherty has given the future king a generous head of hair.

The Prince has sported a distinctive bald patch for several years, but his likeness on the coin benefits from a tidy, regal combover.

They wrote: ‘I love Prince William, but sorry, that coin looks more like Lord Voldemort before his hair loss.’

But others could barely contain their excitement about the new coin, with one Twitter user writing: ‘Can’t wait to get one of these – Duke of Cambridge Prince William has his own coin.’

Meanwhile, royal author Phil Dampier told The Sun that William was likely to be ‘pleased’ with the coin as ‘they’ve given him more hair’.

‘He looks younger than 40 so he won’t complain. He looks thoughtful but also like he’s looking for inspiration, which he will need in coming decades.’

Alongside the Prince’s image the coin will feature an inscription on the edge reading: ‘HRH The Duke of Cambridge’ and image of the Queen, designed by Jody Clark, struck on the other side.

Alongside the new £5 coin, a limited edition two-coin set will be released, featuring a 0.25oz gold celebration coin and a 1982 sovereign coin – the year the duke was born.

The collection will also include a limited edition coin made of 5oz of fine gold quality to mark the special occasion, with laser technology creating a ‘high relief finish’, giving William’s portrait an enhanced 3D appearance.

Clare Maclennan, director of commemorative coin at the Royal Mint, said: ‘The elegant design features a portrait of HRH alongside his royal cypher and the number 40, which pays homage to the maturity and grace of the prince who has become a senior member of the royal family, a devoted husband and a loving father of three, through the eyes of the world.

‘Marking this extra special occasion, we have also struck a limited edition gold coin made with 5oz of fine gold and struck in high relief to elevate the artistry of the design.

‘Our limited edition precious metal coins combine fine craftsmanship and rarity, making them an attractive keepsake for collectors and investors.’ 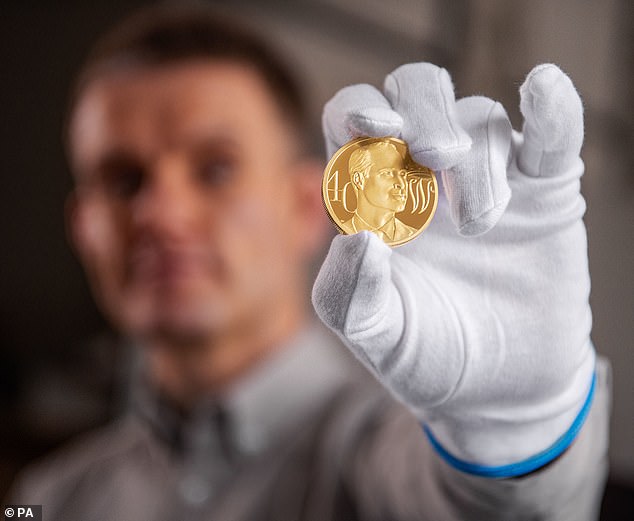 The coin will feature an inscription on the edge reading: ‘HRH The Duke of Cambridge’ 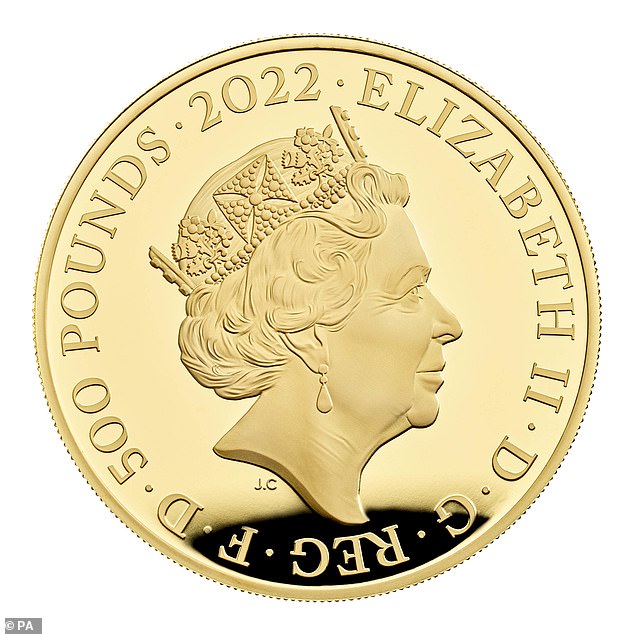 The other side of the celebratory coin will feature image of the Queen, designed by Jody Clark

Speaking of the design, Mr Docherty said: ‘The design strikes a balance between the fresh energy of His Royal Highness being a young dad with the ceremonial nature of his royal position.

History of the Royal Mint: The five portraits of Her Majesty since her accession to the throne in 1952

The artist beat 16 other artists in a competition conducted by The Royal Mint Advisory Committee.

In the wake of the Second World War the coin was designed to make the Queen appear youthful and optimistic.

While Britain did not switch to decimalisation until 1971, decimal coins entered circulation in 1968.

Five and ten pence coins were introduced to replace shillings and florins with a portrait by Arnold Machin.

The new portrait showed The Queen wearing a tiara instead of a wreath.

A royal portrait by the sculptor Raphael Maklouf circulated from  1985 to 1997.

The design showed Her Majesty wearing the royal diadem often worn on the State Opening of Parliament.

The artists’ initials ‘RDM’ can be seen at the bottom of The Queen’s neck.

Her Majesty’s fourth portrait was created by sculptor Ian Rank-Broadley.

The coin, released in early 1998, was designed to show the Queen in a more realistic light.

English engraver Jody Clark created he latest portrait of The Queen, unveiled in 2015.

Clark is the first Royal Mint designer to create a definitive royal coinage portrait in over 100 years.

‘A three-quarter angle of the portrait creates a more dynamic portrait rather than a traditional side-on profile.

‘I used certain clay sculpting techniques on a digital platform to achieve the style needed for the design, to translate effectively from two to three dimensions.

‘Using technology, we can now produce designs and sculptures with better efficiency compared to when I began my career 17 years ago.

‘There’s a high level of skills and craftsmanship needed to sculpt designs – the tools are different but the principles remain the same.’

The release of the 50p and a £5 crown is the first chance for collectors to own a keepsake from the Platinum Jubilee collection.

The 50p is the first of its kind to celebrate a royal event while the £5 coin follows the tradition of marking previous Jubilees on crown pieces.

In addition to the Jubilee coins, there will be £2 coins recognising the life and legacy of Dame Vera Lynn and Alexander Graham Bell.

There will also be a 50p coin marking next year’s Commonwealth Games in Birmingham.

Maclennan said: ‘Each year, the Royal Mint unveils a series of commemorative coins to celebrate key milestones that helped shape Britain and this year’s Annual Set is particularly special with a new 50 pence, £5 crown and special platinum set in celebration of Her Majesty the Queen’s Platinum Jubilee.

‘As the Original Maker of UK coins, the Royal Mint has been trusted to strike coins for Her Majesty throughout an historic 70 years on the throne and celebrated royal milestones such as previous Jubilees on commemorative crown pieces.

‘The Platinum Jubilee celebration is a spectacular first for the British monarchy and for UK coins, and it is fitting that this historic anniversary has been celebrated on 50 pence – which is Britain’s most loved, collectable coin.’

The Platinum Jubilee 50p was designed by Osborne Ross and features a clean reverse design that comprises the number 70, The Queen’s cypher and the years that span her reign.

The £5 crown was designed by John Bergdahl and features a regal design centralised by the quartered shield of the Royal Arms.

The precious metals versions also include the edge inscription ‘SERVE YOU ALL THE DAYS OF MY LIFE’ in reference to The Queen’s longevity as monarch.

The £2 Dame Vera Lynn coin features a portrait of the World War Two forces’ sweetheart at the height of her fame.