YANQING, China — Natural snow finally fell on the National Alpine Ski Center here on the 11th day of Olympic activity — and became a problem for snow sports that have grown accustomed to operating on artificial surfaces.

Organizers canceled the second day of women’s downhill training “due to the snowfall.”

Up in Zhangjiakou, at the Genting Snow Park, women’s slopestyle skiing qualifiers were initially delayed, then postponed to a later date “due to current adverse weather conditions.”

Precipitation began late Saturday night and into Sunday morning. A few inches of snow had coated roads and racecourses in Yanqing by the time Sunday’s competitions neared. Organizers decided a little before 8 a.m. to call off downhill training.

Winter has arrived at the Olympic Winter Games!

Yanqing, host to all Alpine and Sliding events, is enjoying it’s 2nd snowfall of the season. ❄️

The men’s giant slalom competition began as planned at 10:15 a.m. local time, but with decreased intervals between start times from one racer to the next — 1 minute, 45 seconds instead of 2 minutes.

These Olympics have relied entirely on artificial snow for outdoor events, in part because Yanqing — a district on the outskirts of Beijing — and Zhangjiakou — a mountainous town in a neighboring province — receive very little natural snowfall. Yanqing received none last year, and only one small storm earlier this season. Both sit on the outskirts of the Gobi Desert.

The reliance on man-made snow attracted attention and concern from environmental groups. In reality, though, it has become the norm for international ski and snowboard competitions. Some Winter Olympics actually prefer it.

“We have been riding on a lot of artificial snow halfpipes for so long now, we've gotten used to it,” U.S. snowboarder Maddie Mastro said in October.

“The majority of tracks that we ski on are artificially made,” U.S. Alpine skier Ryan Cochran-Siegle said. “And they also do a lot of watering, or injecting with water, to make it more of an icy surface.”

The softer, fluffier natural snow falls on top of that icy surface, and can become a problem.

"Every course needs artificial snow in these days," Bernhard Russi, the designer of the Beijing Olympic Alpine courses, said in 2017. "There is not a lot of snowfall which, it sounds a little bit ridiculous, but it's good. If you have a lot of snowfall you are always in trouble [clearing it]."

In both Yanqing and Zhangjiakou, workers shoveled and blew snow off courses and surrounding areas. In Zhangjiakou, visibility and wind were also potential issues.

Not sure why they're blowing snow off the stands with no fans in attendance..🤷‍♂️#Beijing2022#Olympicspic.twitter.com/CsLGi7hb5J

Snow was still falling steadily in both areas as of 10:15 a.m. local time, and could continue throughout the day in Yanqing. At least 2 inches have already fallen, with up to four more inches anticipated over the next 24 hours, according to forecasts.

Temperatures are hovering in the low teens in Yanqing, and had dropped to 5 degrees Fahrenheit in Zhangjiakou.

This story will be updated. 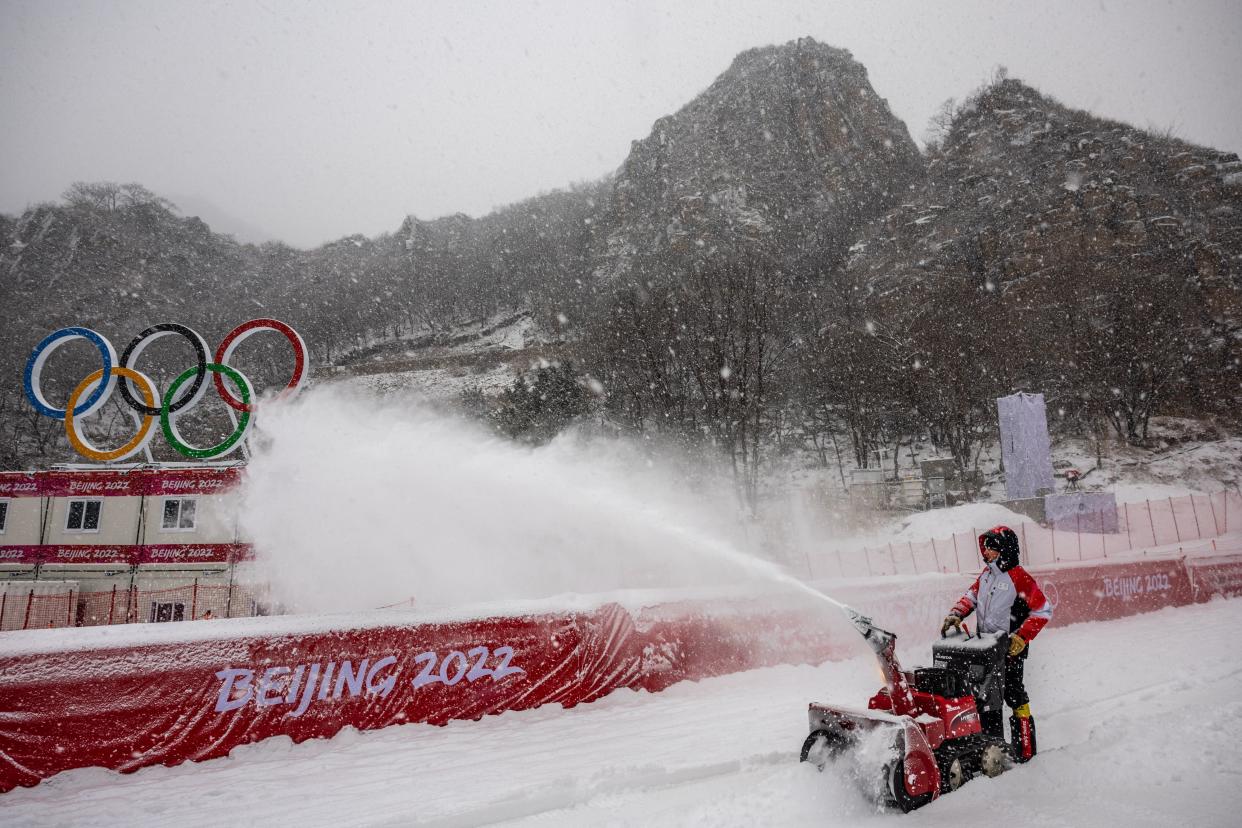