A teenager is in hospital with a fractured neck after he was punched in the face and kicked in the head during an unprovoked, violent attack near a popular Mornington Peninsula swimming spot.

The 19-year-old victim from Bentleigh East had been swimming with some friends at Devilbend Reserve, off Graydens Road in Tuerong, on Sunday afternoon and was walking with his group back to his car about 6.15pm. 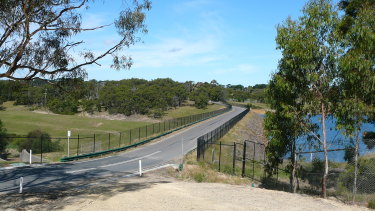 The attack took place at Devilbend Reserve on Sunday.

"It was while he was walking back along the shoreline track, they came across a group of 10 youths. One of those youths threw a stone at the victim," said Senior Constable Tim Jamieson on Tuesday.

The stone narrowly missed the boy.

"The victim asked him why he'd done that, at which point the aggressor approached him and punched him in the face."

The victim fell to the ground, before the offender kicked him in the back of the head, causing him to lose consciousness for 40 seconds.

Friends described the sound of the kick as a "sickening thud" and said it was "with some force", said Senior Constable Jamieson.

The 19-year-old regained consciousness and his friends were able to lift him and take him to his car. They drove him to a local hospital and he was then transported to Melbourne with a suspected broken neck.

"He is in pain and further tests are ongoing," said Senior Constable Jamieson. He said it was lucky the boy hadn't received more severe injures.

"He was repeatedly punched to the face, he didn't put up a fight and after falling to the ground, friends told us he put his hands around his head and still the attacker kicked him hard in the back of the neck.

"The fact he suffered a fractured neck and made it to the hospital is a miracle in itself. It was a sickening attack, it was aggressive. These teenagers have got to realise the damage these fights can cause.

"It was completely unprovoked … it's cowardly. The aggressor was six foot tall, well-built, he towered over the victim, the victim stood no chance and the fact the victim didn't put up a fight is even more sickening."

The family of the boy, who works in traffic management, are incredibly upset.

"[His mother] is at a loss as to how it could have happened. It was a Sunday afternoon, it was a beautiful afternoon, the kids had gone down for a swim. That's the last she saw of him until … the hospital, with effectively a broken neck. She's beside herself, the whole family are upset and just can't understand the severity of the attack."

Police say the offender is perceived to be of Maori or Islander appearance, approximately 183 centimetres tall, with black curly hair, shaved on both sides, a solid build and a tattoo on his chest.

The group that were with the offender were using two or three vehicles, one described as a blue Holden Calais VZ and a silver Commodore. They were bearing P-plates.

"There's a 19-year-old boy in hospital with serious injuries, we still don't know the outcome. They've got to have respect for one another … the aggressor, he towered over the victim, it's time for him to man up and hand himself into police for questioning."

Anyone with information or who witnessed the incident is urged to contact Crime Stoppers on 1800 333 000 or file a confidential report at www.crimestoppersvic.com.au.