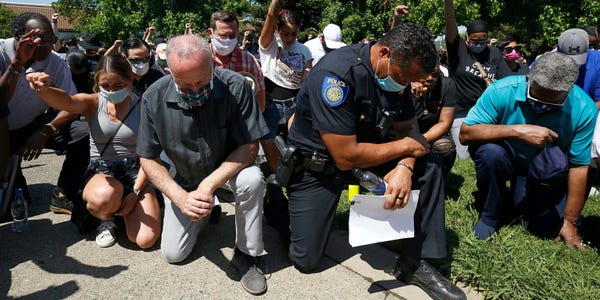 Sacramento Police Chief Daniel Hahn never wanted to be a cop. Growing up in Oak Park, a historically Black, working-class neighborhood of Sacramento, his early interactions with the police were largely negative.

At 16, he was arrested for assaulting an officer in his living room when he and his mother got into an argument, and she called the police. Prostitutes also held court on the street corners of his neighborhood, where he witnessed a murder and regular drug deals.

"Officers weren't held in high regard in my neighborhood," Hahn told Insider in a recent interview.

After turning down a police recruiter several times, Hahn took the entrance exam on a whim. When he learned it paid $5 more an hour than what he was making at the time, he decided to join just long enough to pay for college. He was 19 when he joined.

What changed his mind, Hahn said, was working as a neighborhood police officer and teaching at a local high school as a rookie. It made him realize all the good could do as an officer, he said.

The rise of Black police chiefs

Policing in America remains an overwhelmingly white, male profession. In 2016, 71% of officers surveyed by the Bureau of Justice Statistics were white, and 87.7% were male.

Yet it has become increasingly common to see Black men and women leading police departments across the country.

Hahn is among 21 Black police chiefs serving in America's 50 biggest cities, according to Insider's calculations. They include Minneapolis, where the police killing of George Floyd in May prompted national protests calling for law-enforcement reform.

The rise of Black police chiefs has in part been a political response to historic tensions between the police and the Black community.

Oftentimes a Black police chief is hired by a mayor or city manager after a high-profile conflict between the African-American community and the police. After the 1992 Rodney King riots in Los Angeles, and the fatal shooting of Michael Brown in Ferguson, Missouri, both cities hired their first Black police chiefs.

Hahn himself was tapped after a series of controversial police shootings in Sacramento, including the 2016 killing of a mentally-ill Black man.

Black police chiefs often find themselves under more pressure than their white counterparts to enact change, and on the firing line when their visions aren't realized immediately.

Since Floyd's death, there has been a flood of resignations from Black police chiefs:

Hahn said the fact that so many Black police chiefs have quit recently shows they are under unique pressures.

"They are all brought in as progressive police chiefs to change culture and things in the department. They are all in more liberal cities and they've all been run out of office," he said.

"I don't see any conservative police chief holding the line being run out of office. So yeah, I would say there's some uniqueness to being a Black police chief."

Jacinta Gau, an associate professor of criminal justice at the University of Central Florida, said Black police chiefs are often hired because they are seen as "reformers" who can "clean things up and alleviate or eliminate racial tensions."

Black police chiefs are believed to be able to bridge two communities historically at odds with one another.

"There is an added benefit of someone who has had that lived experience, who has connections to the community," Tracie Keesee, cofounder of the Center of Policing Equity, told Insider.

But Keesee said it's "troubling" that the public expects Black police chiefs to "change the culture within four years or overnight."

"They think the unrest that's happening in the streets is going to stop because a person of color is there. It's not going to happen," Keesee said.

Black police chiefs — like many other Black officers — also struggle with being fully accepted by these two communities.

"They face a lot of challenges that white officers do not face in part because they have these dueling identities and face discrimination within their own ranks," Gau said.

"Every Black police officer out there has been discriminated against by white police officers. They also face racism from the outside world."

Hahn said members of the Black community have called him "a sellout" and an "Uncle Tom," officers have questioned his loyalty, and white people have told him he only got the job as chief because of his race.

"If I don't use strong language in supporting an officer, I often get [comments] that I'm not supporting my officers," he said. "But if a white police chief says the same thing, they don't get that response."

"It's one thing to be disparaged because of a profession, it's a whole different thing to have your own community say you're no longer one of us, because of the shirt you wear."

"I often feel that there's a segment of our society that doesn't believe you can be Black and be a police chief, that it's in conflict. I don't believe that," Hahn said. "I'm Black when I take my uniform off. My daughters are Black, my wife is Black, my family is Black. I'm extremely proud about being Black and being a police officer, and 110% believe I can be both."

Hahn was sworn in as police chief of Sacramento in August 2017, becoming the first Black person ever to hold the position.

His biggest challenge came seven months into the job, when he had to answer for the police shooting of a young Black man.

While investigating a report of broken vehicle glass in a neighborhood, two officers got into a foot chase with a suspect, and ended up shooting 22-year-old Stephon Clark seven times. The officers said they believed Clark was armed, but he was actually holding a phone and standing in his grandparents' backyard.

The officers — one of whom is Black — were never charged with a crime and were allowed to keep their jobs.

Hahn was generally praised for his leadership during this crisis. He released footage of the shooting within 72 hours, and changed his department's policy on foot chases.

But he wasn't without critics. When the Sacramento Police made several arrests at a protest marking the one-year anniversary of Clark's death, Rev. Shane Harris, founder of the civil-rights group People's Alliance for Justice, called for Hahn's firing.

Sacramento Bee columnist Marcos Bretón wrote that Hahn deserved "way more heat" for Clark's killing, and that Hahn had not "ironed out structural, tactical and training problems" in his department.

And when Hahn announced that the two officers would be returning to full duty, just minutes after federal officials closed the civil-rights investigation into the shooting, Clark's brother, Stevante, told the Sacramento Bee the decision was "f—ed up."

When approached for comment, a Sacramento Police spokesman referred Insider to a January 2019 op-ed from Hahn, where he listed various changes the department had made in the year since Clark's death, like creating a new training division and equipping officers with body cameras.

Why having a Black chief isn't enough

Hiring a Black police chief can be seen as a political leader's show of commitment to addressing a toxic police culture, but experts say that's just one factor of law-enforcement reform.

"Hiring someone at the top is one tiny, tiny part of what you need to do to change police behavior," James Forman Jr., a professor at Yale Law School and expert on race and policing, told Insider.

Other changes are needed to address the culture that results in regular police brutality against Black people, Forman said, including spotting bad cops early and training officers to be guardians instead of warriors.

And until a department has accomplished all of these factors, "you're going to see very little change," Forman said.

"There are very few departments that have ever been able to get all of those pieces together for any period of time, which is why we have the crisis that we have right now," he added.

Dwayne Crawford, executive director of the National Organization of Black Law Enforcement Executives, said it would help to have a national body for the police — in the way the military has the Pentagon — to help lead from the top.

"It's so important to get national laws in place that at least force the 18,000 [law-enforcement agencies in America] to have some consistency and if nothing else, some components like a ban on chokeholds," Crawford told Insider.

'I'll be damned if we did not take a knee'

When Hahn first saw footage of Floyd's killing in May, he said he was struck by how much Derek Chauvin, the officer who knelt on Floyd's neck for nearly nine minutes, looked like one of his own.

"It makes you cringe that a human being can do that to someone else for that length of time," he said. "It was extra impactful in that he basically represents what I represent."

After seeing a Floyd march in New Jersey that included local law enforcement, Hahn contacted Sacramento community leaders and asked if they could work together on something similar.

Hundreds of people took part in their June 3 march, where Hahn and the mayor took a knee during a moment of silence for Floyd.

"Some didn't necessarily agree with us taking a knee," Hahn recalled. "I'll be damned if we did not take a knee."

The long road of progress

Hahn said that as police chief, he's focused on improving relations and dialogues between his officers and Sacramento residents. He said he has "multiple organizations, either reviewing our department or teaching history and bias in our department."

"Only when we expand and understand each other better can we work together and come up with a solution to what ails us," he said.

Hahn knows the work he's doing now isn't going to produce immediate results, and that it's going to take years to see significant improvement in the relationship between the police and Black America.

"I am confident we can get to the right place in Sacramento. It's not going to be completed in my career or the chief after me's career. We didn't get here overnight. We have a long, long history, and it's much broader than law enforcement," Hahn said.

"My job is to drive the bus down the right road as long as I have this position and hopefully hand it off to another person who believes in getting to a better place."