Jay-Z is towing the line between self-expression and safety, just hours after law enforcement was mandated to step up mask enforcement in New York state.

On Saturday, the rapper and billion dollar business man was seen out in the Hamptons with a group of maskless friends as they stepped out for a walk.

Clearly not too concerned for their safety or that of others, the group seemed to look carefree as they chatted after some light exercise. 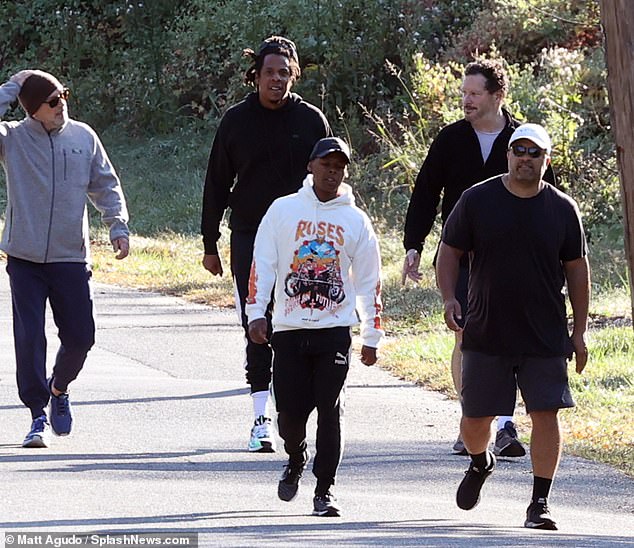 Walk the line: Jay-Z, 50, was spotted out with a group of maskless friends as the went for a walk around The Hamptons over the weekend. The sighting comes just hours after New York Governor Andrew Cuomo mandated that officials step up mask enforcement

For the active outing, Jay cut his usual cool display in a lowkey athleisure look.

He sported a black hoodie and a pair of black joggers with a white stripe, that he layered under white basketball socks.

He added a pop of color to his outfit with a pair of turquoise accented sneakers and threw on a backwards hat.

His buddies all sported similar athletic clothes as they took a stroll around the upscale neighborhood. 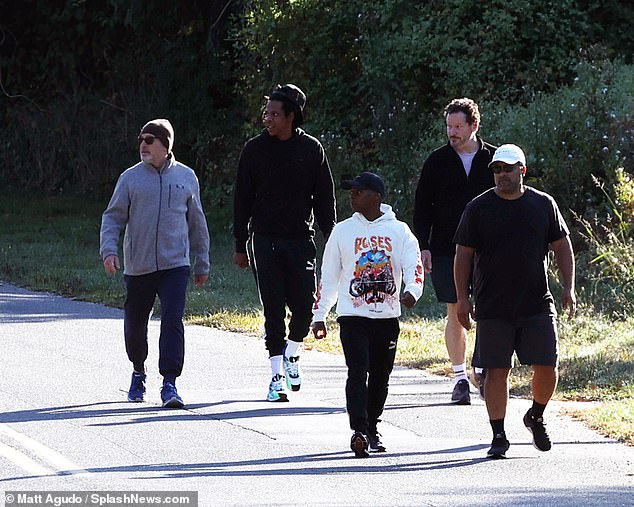 Neighborhood watch: Jay and his group of buddies all stepped out for some light exercise as they jogged and walked in athleisure looks 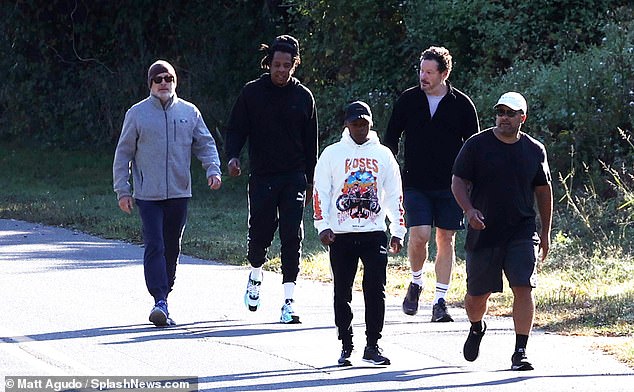 Action: The sighting comes days after Jay and Meek Mill’s REFORM Alliance notched a win from California Governor Gavin Newsom who signed a bill that would reduce probation sentences

The sighting comes just hours after Governor Cuomo said that he would enforce Section 16 of the health law, which would allow him to fine the city $10,000 for violations.

The rapper seemed not to care, as he was still buzzing from his justice reform win days ago.

Taking to their Instagram to announce the big news, the duo thanked Governor Gavin Newsom for signing Bill AB 1950 into action. 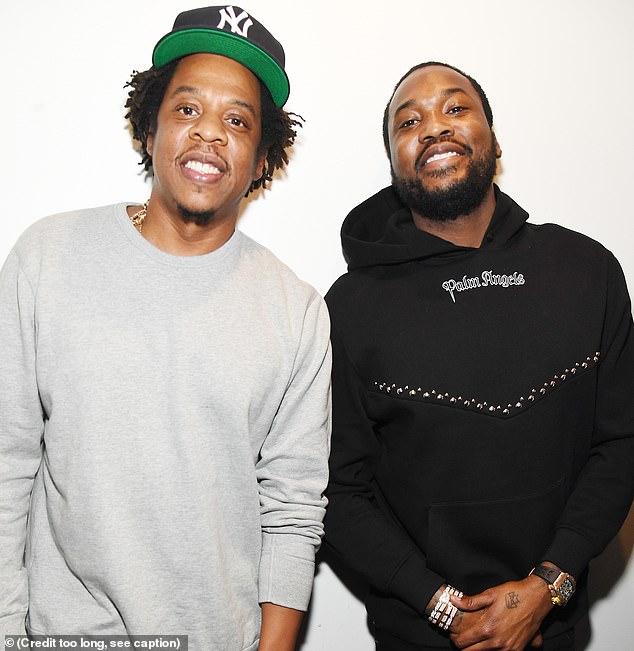 Making changes: REFORM was founded in part by rappers Jay and Meek who helped flood Governor Newsom’s office with thousands of letters to reduce probation sentences; pictured in 2019 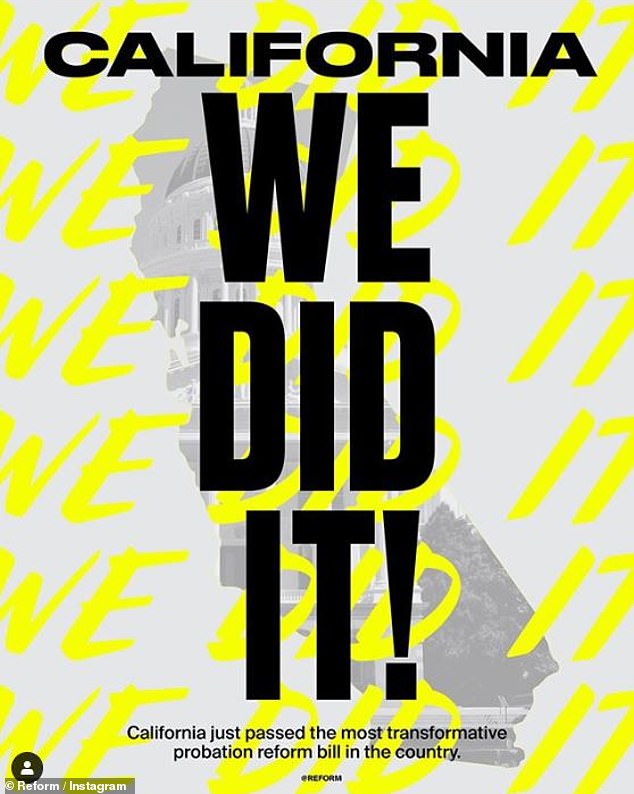 We did it: The Alliance took to Instagram to announce the exciting news, which has a personal connection for Meek who was sentenced to eight years of probation after a conviction in 2008 for drug dealing and gun possession

‘This bill will help put hundreds of thousands of Californians on probation in positions to succeed and exit the criminal justice system for good,’ they wrote in their caption.

The signed bill now mandates that probation sentences be limited to a maximum of one year for misdemeanors, and two years for felony convictions.

Michael Rubin wrote on Twitter, ‘ @REFORM was inspired by my guy @MeekMill who spent his entire adult life on probation, going in and out of prison, for technical probations# violations (again, not committing a crime). The madness has to end and today was a huge step towards fixing this issue! 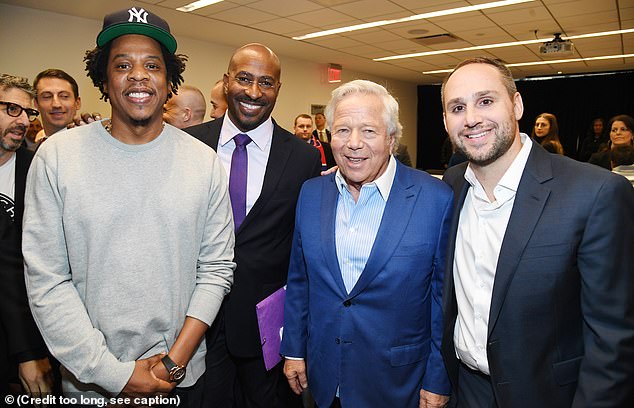 REFORM: Founders Jay Z, Van Jones, Robert Kraft and Michael Rubin are pictured in January 2019 at the launch of the REFORM Alliance

‘This is just the beginning of our push to creating logical probation and parole laws in every state, while at the same time improving public safety and saving taxpayers billions of dollars!!! LET’S GO!!!’ he continued.

Meek was notoriously sentenced to eight years of probation after a conviction in 2008 for drug dealing and gun possession.

He had multiple run-ins with the law for minor probation violations in the following years, and the judge, Genece Brinkley, was at one point investigated by the FBI for her conduct over the years with Meek’s case. 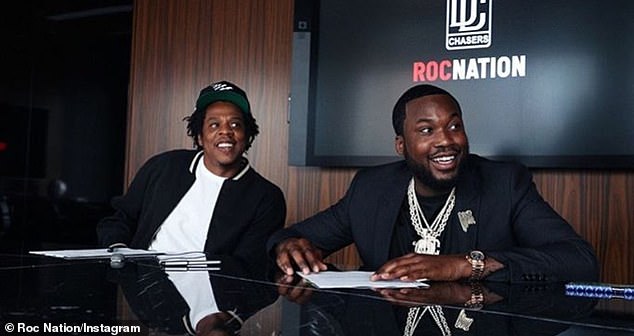 Personal ties: Meek was sentenced to eight years of probation in 2008 after drug dealing and gun possession. In the two years the organization has been around they have made big strides in justice reform