At least two medical professionals were among dozens of people who attended a prohibited engagement party in Melbourne’s south-east that is now set to attract at least $350,000 in fines.

Premier Daniel Andrews lashed out at the organisers of the “uniquely bad” gathering attended by 69 people last week.

The visibly angry Premier said the engagement party had gone ahead despite many others postponing parties and weddings or holding funerals with just a handful of people during lockdown.

People at the party will each be fined $5500, while the presence of medical professionals at the gathering has been referred to the health practitioner regulator.

Authorities confirmed there had been three cases linked to the party, held in Caulfield North last week, but tests results for more than half the attendees had not been returned on Monday.

“It’s already a transmission event,” Mr Andrews said. “The only question is whether it will be a superspreader event.”

The Age has decided not to name the healthcare professionals who attended. None of them could be reached for comment on Monday.

Mr Andrews said he was particularly angry because the event had created a huge workload for contact tracers.

“Our contact tracers, who are working their guts out for all of us, will have to spend literally thousands of hours dealing with hundreds and thousands of people connected to that engagement party.” 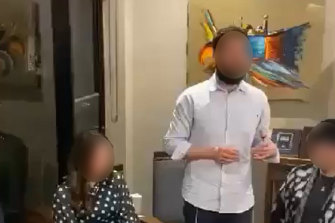 Screenshots of a man giving a speech at the gathering.

Video of the engagement party showed a man joking as he gave a speech to the guests.

“Clearly this is legal,” he said, “because this is a group therapy session.”

Dozens of people, including young children, can be seen in the video. None of them appear to be wearing masks.

A spokesman for the Australian Health Practitioner Regulation Agency said it had received a number of complaints about health practitioners who had allegedly attended an event in Melbourne.

He said the agency was aware the police intended to take action against the individuals.

“We will liaise with them in relation to any registered health practitioners who were present.”

The spokesman said all health practitioners should be aware of their legal obligations and the boards regulating health professionals would take action against those failing to comply.

Victoria Police Chief Commissioner Shane Patton said he became aware of the engagement party on Sunday night and had referred “what appears to be total breach of the CHO guidelines” to police investigators for further examination. 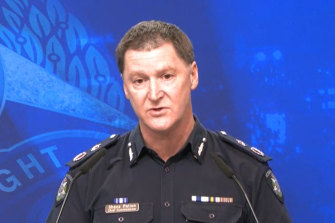 He described the event as selfish, disappointing and outrageous.

“I expect that every one of those people will be getting an infringement unless they’re a child and we’ll assess that on a case-by-case basis.”

Mr Patton said there must be consequences for breaching the rules during the pandemic and estimated about $350,000 in fines would be issued.

The government announced tighter restrictions on Monday because of widespread failures to comply with health orders, including pub crawls at several locations.

Health authorities on Sunday reported a mother and son from Melbourne’s Orthodox Jewish community were confirmed as positive coronavirus cases. The authorities told community leaders that the two new cases might have attended a large gathering in recent days.

The leaked video of the event sparked outrage within the broader Jewish community.

Mount Scopus Memorial College principal, Rabbi James Kennard, said leaders of the community should be expressing their disgust at those who break the rules.

“Sunday was a day of great shame for the Jewish community and I hope it will be a wake-up call to those who still feel the rules don’t apply to them,” he said.

“They should realise the harm they are doing and the health crisis that they are possibly creating.”