British schoolboy, nine, taken on South African holiday of a lifetime was fatally poisoned by his own father who then shot himself dead in their hotel room 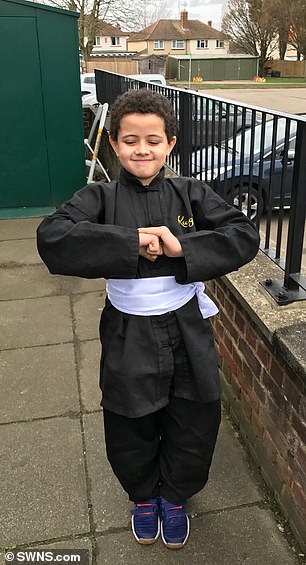 Noah Smith, nine, (pictured) was poisoned by his father Dr Vuyo Tame – who then shot himself, an inquest has heard

A British schoolboy taken on a holiday of a life time to South Africa was poisoned by his Doctor father- who then shot himself in the head in their hotel room, an inquest has heard.

Noah Smith, nine, had been flown to Johannesburg in January this year by his South African-born father Dr Vuyo Tame on an annual holiday together.

But Noah, a cub scout who was training for his black belt in Kung Fu, never made it home to the UK.

He was found dead alongside his 47-year-old father by hotel staff in their room at the four star Raddison Blu Hotel in Johannesburg in January, an inquest heard today.

Paramedics pronounced them both dead at the scene and a post-mortem found the cause of Noah’s death to be poisoning.

Post-mortem examinations from South Africa show Noah had high levels of Diphenhydramine, an antihistamine, in his system which caused his death.

South African Police Service officers said Noah had bruising round his neck consistent with strangulation, but British detectives have disputed this.

When asked by the coroner if she believed Noah had been killed by Tame, Detective Inspector Kaye Braybrook of Kent Police said ‘yes’.

She added that she believed Noah was dead before Tame shot himself in the head.

The inquest was told Tame had a rocky relationship with Noah’s mother, Victoria Smith, 42, from Burham, near Rochester, Kent who’s life has been ‘fractured’ by the harrowing events. 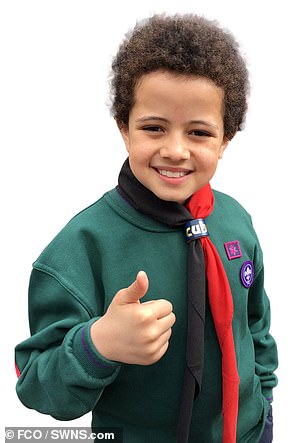 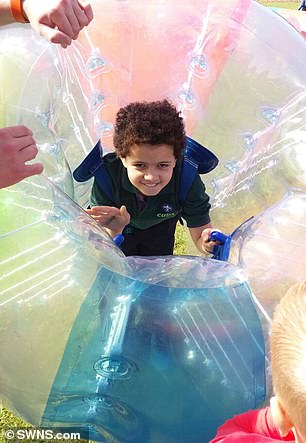 Noah (pictured left and right in Scouts uniform) was pronounced dead by paramedics when they arrived at the hotel in Johannesburg, South Africa, earlier this year

They met in 2004 working on the high dependency unit at the Nuffield Health hospital in Guildford, Surrey, and their romance blossomed.

He consoled her after the breakup of her first marriage, and they began dating a few years later.

In a statement read to the inquest in Maidstone, Kent, Ms Smith said Tame became distant when she fell pregnant with Noah.

She said: ‘Initially, Vuyo seemed happy about the pregnancy, but as time moved on he became cold towards me.

‘One colleague congratulated him on the pregnancy, but he referred to it simply as a ‘fetus’. As time went on, I was getting more and more concerned about Vuyo’s behaviour.

‘This was compounded when he said he could not make it to my first scan. To this day, I do not really know why he ended the relationship.’ 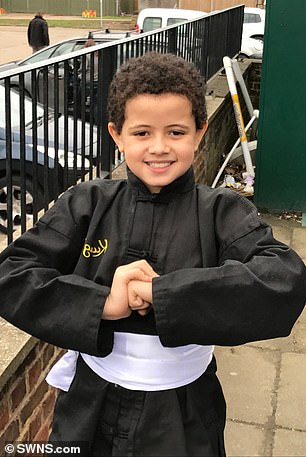 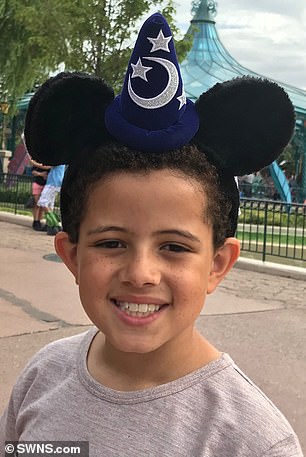 Noah’s mother told the inquest that she became concerned when her son (pictured left and right) did not come home on the agreed date of January 7 and she got in touch with police and Tame’s family. Noah’s death was confirmed on January 9

The couple broke up but Ms Smith tried to be fair with Tame seeing Noah, though Tame would regularly be late or not turn up when he was due to have him.

When they went to register Noah’s birth, Tame became ‘verbally aggressive’ and shouted at Ms Smith and staff because Noah was taking his mum’s name.

He later ordered Ms Smith to take a DNA test to prove Noah was his, the inquest heard.

Tame had taken Noah to Canada and South Africa in the past, and Ms Smith said her worst fear of them going away together was that her ex would ‘abduct’ him.

The inquest heard Ms Smith last spoke to Noah on the phone on December 30, with him saying he ‘was having a good time and he was on a beach at the time of the call’.

But after growing concerned when Noah did not return home on the agreed date of January 7, or have any contact with her, she got in touch with police and Tame’s family. Noah’s death was confirmed on January 9.

They told her Noah ‘had an accident and was in hospital’ but then said he ‘had been poisoned and was in a mortuary’.

She said she has been ‘trying to work out why Vuyo would do this’ and noticed he had been ‘spoiling’ Noah more than usual in the past year. He doted on Noah.’

At the time of his death, Noah’s mother issued a tribute to him through the Foreign Office.

She said: ‘The family wishes to pay tribute to Noah following his murder on the 8 January 2018 in Johannesburg, South Africa by the hand of his father, Vuyo Tame.

‘Noah had a rare, unforgettable charisma but also such humility. Noah was a ‘fun loving’, caring, bright and beautiful boy. He was the kind of child that just shone that bit brighter.

‘He was clearly destined for great achievements in life, making his death so much more tragic and so hard for me to bare.

‘I loved being his mother and felt privileged to watch him grow into such a beautiful, funny and kind boy. I loved every minute and special moment that I had with him, and I will cherish the memories of him forever.

‘All my family and me, feel his loss so very deeply, and we have been truly devastated by his death and we are struggling to deal with the aftermath.’

Coroner Ian Wade said Noah’s cause of death was Diphenhydramine poisoning, concluding he was unlawfully killed.

Mr Wade said: ‘He (Noah) was healthy, he was lively. Photographs of him in life strongly suggest he was self-confident and very likely to have grown up a handsome, engaging young man.’

‘At the time of this consumption, I find that Noah was in the custody of his father – a doctor of medicine who, of all adults, would have been experienced enough to know and exercise care about the administration of potentially dangerous medicine.

‘I find it inconceivable, in the circumstances, that Noah’s father would have inadvertently allowed Noah to take an overdose.

‘On the evidence that I have heard, the background is that Noah’s father had demonstrated a bizarre and changeable attitude to Noah’s existence and upbringing.’

Mr Wade said there was no evidence of third party involvement in the events that happened inside their hotel room.

He said: ‘I am quite satisfied that whatever happened inside that room involved only Noah and his father. That father has proved to be deceitful.

‘I find Noah could not have been awake or alert at the time Vuyo Tame took his own life with his pistol. On the evidence, it must be that Noah’s father administered the Diphenhydramine.’

He said it was not clear why Tame murdered his son, but it ‘may have been that he did what he did out of anguish and guilt’.

For confidential support call the Samaritans on 116123 or visit a local Samaritans branch, or see samaritans.org for details.