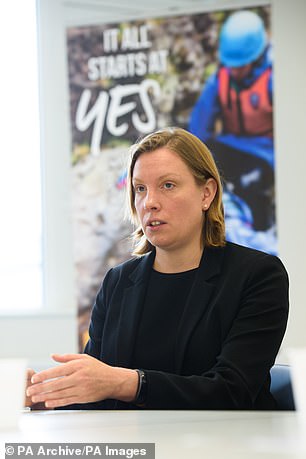 Enterprising bookies could have made a few jimmies yesterday by taking bets on whether or not Sports Minister Tracey Crouch had quit.

Dawn broke with a report that Miss Crouch, 43, a sniffly Kentish spinster as much liked as she is pitied, was on the verge of resignation.

She was upset about a Government delay in acting against fixed-odds betting terminals or FOBTs. Horrible things, FOBTs. They cause untold social wreckage.

Five months ago Miss Crouch happily announced that FOBT stakes were going to be cut from £100 to £2. It was understood the cut would be in place by next Spring. Now the Treasury (ie that man Hammond) is insisting on a six-month delay. High stakes generate oodles of tax, you see.

The Commons day began at 9.30am with Culture and Sport questions. Where was our Tracey? Not where she should have been, which was on the Government bench. Honk the klaxons. Escaped prisoner.

Miss Crouch’s boss, Culture Secretary Jeremy Wright, said she had been in the US on official duties and only flown back on the red eye.

It would have been ‘unwise to rely on public transport or London traffic’ to get her from the airport to the Commons in time for the start of play. Well there’s a vote on confidence in Transport Secretary Chris Grayling.

Mr Wright’s claim was undermined when the BBC reported that Miss Crouch had been called to see the Government Whips at 9.45am. ‘Is she in the building?’ asked Labour’s Kevin Brennan. Mr Wright left that one alone.

Scepticism sharpened when, 50 minutes later, during a lull for questions to the legal officers, Government Chief Whip Julian Smith materialised behind the Speaker’s Chair.

Mr Smith shimmers like an All Souls Day wraith. Around his contours the air seems somehow to vibrate. He beckoned a bony finger at Mr Wright, summoning him outside for urgent words. This was awkward, for Mr Wright was about to face an urgent parliamentary question about the FOBTs rumpus.

Tick tock. Would Mr Wright be back in time to answer his question? Yes, just, but by now he was a little pink-eared. Had Tracey committed harakiri?

Ms Crouch said she was quitting with ‘great sadness’ but warned the Prime Minister delays would cost lives as two addicted gamblers kill themselves every day.

‘She is doing an outstanding job as a minister,’ said Mr Wright with as straight a bat as could be mustered.

We Poirots of the press gallery took note of that present tense: she was still a minister, even if her fellow junior ministers were by now pretty green.

Wind down your window, Mavis. Michael and Margot look peaky. Nick Smith (Lab, Blaenau Gwent): ‘Has Miss Crouch threatened to resign?’ Mr Wright: ‘I have made it clear I think she’d doing a great job. The decision on FOBTs has to be taken collectively.’ Or ‘yes’, as normal people would say. 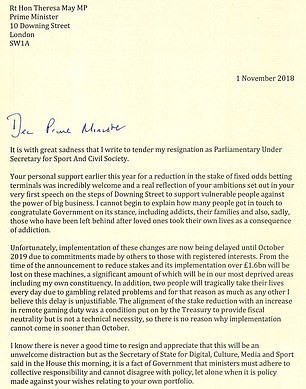 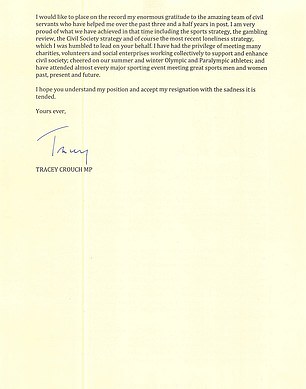 In her resignation letter, Ms Crouch said the delay would mean people ploughing £1.6billion into the machines between the day of the announcement and the final delivery of reform

David Jones (Clwyd W) accused Mr Wright of ‘pure semantics’. Philip Davies (Shipley), often seen as the bookies’ runner, was for once not present. But the Tories’ deputy Chief Whip Christopher Pincher was. He stood at the far end of the House, eyebrows as busy as knitting needles.

This is the British Treasury you’re dealing with. Principle comes second to the Chancellor’s amour propre and Whips’ deals. When P. Hammond is involved, the despatch box becomes the lack-of-despatch box.

A farcical morning ended in an appropriate manner with the next item of business, questions to Commons Leader Andrea Leadsom.

No sign of her! Was she, too, about to quit? Actually, she was merely late. Here she cam, sprinting into the Chamber – and very nearly sent a doorkeeper for six. 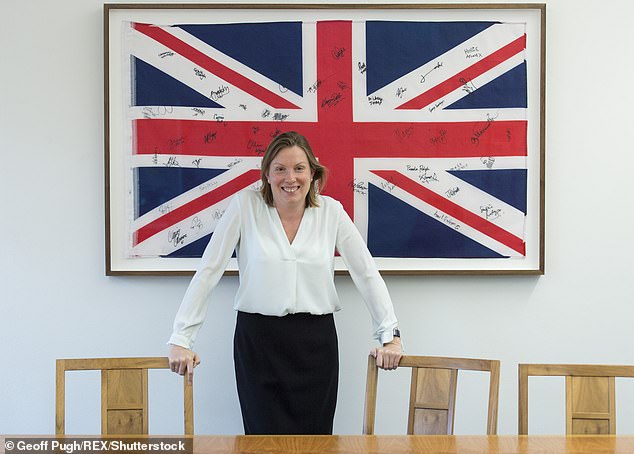