A school has banned pupils from wearing Liverpool FC face masks in a bid to stop them from becoming fashionable ‘status symbols’.

Lord Derby Academy (LDA) in Huyton, Merseyside, sent a text message to parents saying face coverings worn in the school must be ‘black, grey, burgundy or medical blue’ in school from Monday, September 21.

A mother has since aired her frustration after he child’s face mask, which is red and black and emblazoned with a Liverpool FC badge, was one of those banned under the new school rule.

Johanne Hall, 43, who was one of those to receive the text, said she is not opposed to pupils and staff wearing face coverings, but was frustrated at the short notice given to parents.

She added that ‘it shouldn’t matter what colour a mask is as long as the children wear it and feel safer.’ 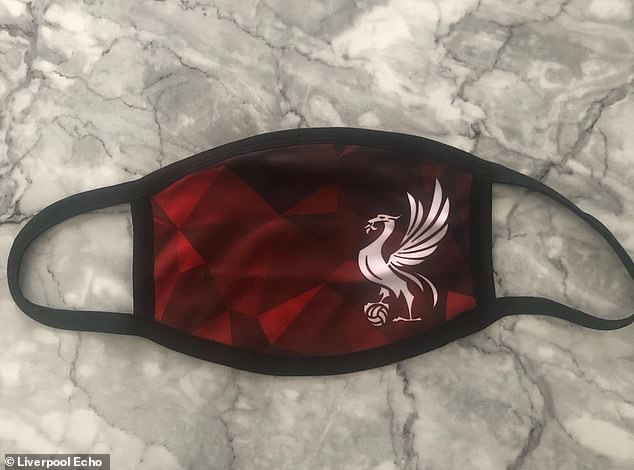 Johanne Hall is frustrated that her child’s school is allowing only certain coloured face masks to be worn on site. This black and red patched mask with a Liverpool FC logo (pictured) belonging to her son is banned

But the school insists the measures being put in place are to ‘ensure a completely inclusive approach’ and that LDA is determined to avoid any pupil being ‘singled out’ and face coverings becoming a ‘status symbol.’

Now that face masks are compulsory, people are turning their backs on the blue medical ones in favour of more creative and designer ones.

It has led people to flock online to comb through the latest ‘must have’ face mask designs.

Manufacturers are all too pleased to meet the demands and have made them available in floral, leopard print, camouflage and of course team sports.

Johanne said she contacted the school Friday after the announcement for more information but didn’t speak to LDA until yesterday to discuss the matter.

But after her son returned home from school she heard he was told he couldn’t wear a black and red patched mask with a Liverpool FC logo on it and was instead given a ‘medical blue’ mask to wear.

Johanne said she contacted the school again this morning and that after months of children being away at home due to the pandemic, they shouldn’t be given anything more to be ‘anxious’ about.

The mother told the ECHO: ‘They have to wear the school colours or surgical blue masks, but as long as they wear a mask they are saving lives. That’s all that matters.

‘As long as they’re respecting each other and the guidance it shouldn’t matter what colour it is as long as the children wear it and feel safer.

‘But getting that message on a Friday afternoon to rush around and get masks, some people might not have money or are on universal credit and going to foodbanks, never mind paying £3 for a mask.

‘It’s not only that it’s the queues as well in the shopping areas. Parents may not have that time or resources or ways to get the places and when they get there a shop may only have a specific mask.’ 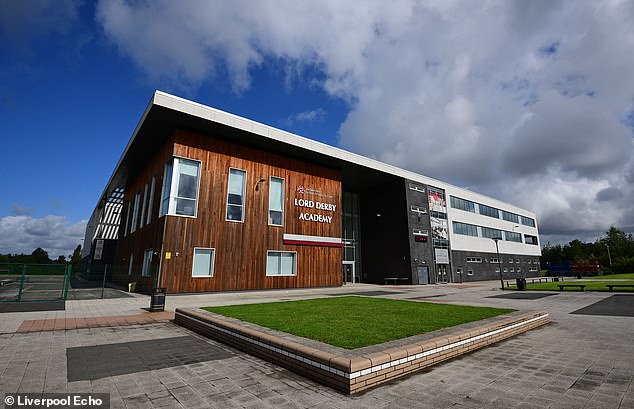 Johanne said she will be compliant with the rules of the school but that she believes more notice and reasons should’ve been given to parents and pupils to avoid any more ‘anxiety.’

She said a different or fun face mask may lift the spirits of pupils and that wearing masks are about ‘saving lives’ not ‘branding.’

What are the rules on face masks in UK schools?

What is the situation in England?

Pupils and staff at secondary schools in local lockdown areas will have to wear face masks in communal areas.

This does not include classrooms and does not apply to primary-aged pupils.

In all other parts of the country, it will be up to headteachers to decide whether masks are required.

Which parts of the country will be subject to the mandatory face masks rule?

Any part of the country which is defined as an area of national Government intervention.

As of Tuesday evening, local restrictions were in place in areas of Greater Manchester, Lancashire and West Yorkshire, Leicester, Luton and Northampton.

What are the rules in Scotland?

The Scottish government announced yesterday that face coverings should be worn by staff and pupils when they move around secondary schools from August 31. The rules will also apply on school transport for primary school pupils aged five and above.

What about Wales and Northern Ireland?

Welsh health minister Vaughan Gething said yesterday a decision on schoolchildren wearing face coverings will likely be made today, but current guidance says masks are not being recommended.

Johanne said: ‘I even suggested to one of the teachers if the school have to wear masks and they need those colours for the children to be ambassadors for the school why don’t you give everyone a mask.’

Lord Derby Academy Headteacher Victoria Gowan said: ‘On Friday 18th September 2020, Lord Derby Academy was informed of the new measure being implemented by Knowsley Local Authority that staff and pupils would be requested to wear a face covering in all communal areas in Knowsley secondary schools.

‘The measure would be implemented from Monday 21st September due to the increase in COVID-19 transmission rates and the new local restrictions.

‘This new measure is fully supported by Lord Derby Academy and The Dean Trust.

‘Leaders made the decision that, in line with other Dean Trust schools, face coverings for both staff and pupils would need to be ‘black, grey, burgundy or medical blue’.

‘This request is to ensure a completely inclusive approach.

‘The school is determined to avoid any pupil being ‘singled out’ and face coverings becoming a ‘status symbol’.

‘Any pupil without a suitable face covering has been provided, free of charge, with a ‘medical blue’ mask by the school.

‘The new face covering measure was implemented at LDA very smoothly yesterday – with no child being disadvantaged. I thank the school community for their support in this matter.’

Responding to the school Johanne said she ‘takes her hat off’ to the work of the teachers.

She said she wouldn’t have been so bothered by the rules if an explanation was provided when she first attempted to contact LDA on Friday.

Teachers have previously warned that the decision to make face masks compulsory in schools would create chaos in schools amid fears pupils will bully each other over their choice of covering.

The Government last month announced that face masks would be made compulsory in the communal areas of secondary schools in parts of England which are subject to local lockdowns.

A decision on whether to wear masks in non-lockdown area schools is being left to individual head teachers.