Lviv: Ukraine’s detention of fugitive Ukrainian oligarch Viktor Medvedchuk, the former leader of a pro-Russian opposition party and a close associate of Russian President Vladimir Putin, has been met with enthusiasm in Kyiv and irritation in Moscow.

Underscoring the almost personal nature of the conflict, analysts say Medvedchuk will become a valuable pawn in the Russia-Ukraine talks to end the devastating war that the Kremlin has unleashed on its neighbour. 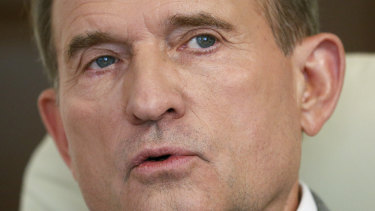 Medvedchuk was detained on Tuesday, Kyiv time, in a special operation carried out by Ukraine’s state security service, or the SBU. Ukrainian President Volodymyr Zelensky has proposed that Russia could win Medvedchuk’s freedom by trading Ukrainians now held captive by the Russians.

The 67-year-old oligarch escaped from house arrest several days before the hostilities broke out February 24 in Ukraine. He is facing between 15 years and a life in prison on charges of treason and aiding and abetting a terrorist organisation for mediating coal purchases for the separatist, Russia-backed Donetsk republic in eastern Ukraine.

Medvedchuk has close ties with Putin, who is believed to be the godfather of his youngest daughter. His detention has sparked a heated exchange between officials in Moscow and Kyiv. 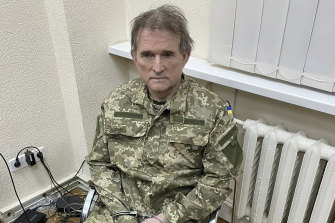 In this image provided by the Ukrainian Presidential Press Office, oligarch Viktor Medvedchuk upon his capture.Credit:AP

Dmitry Medvedev, the deputy chair of Russia’s Security Council and the country’s former president, posted threats to Ukrainian authorities on the messaging app Telegram, referring to them as “freaks” and warning them to “carefully look around and firmly lock the doors at night”.

Zelensky’s advisor Mykhailo Podolyak, in response, called Medvedev a “nobody,” and said his words were “nasty and, as usual, stupid”.

“The friendly relations between Putin and Medvedchuk turn him into a valuable trophy for Kyiv, and in the Kremlin they spark fury and a dangerous desire for revenge,” Volodymyr Fesenko, an analyst at the Penta Centre, told The Associated Press on Wednesday. “The fate of Medvedchuk will undoubtedly become a subject of bargaining and one of the points of undercover agreements between Kyiv and Moscow.”

Zelensky has released a photo of Medvedchuk sitting in handcuffs and wearing a camouflage uniform with a Ukrainian flag patch, in which he looks tired but visibly unharmed.

Medvedchuk’s wife Oksana Marchenko has appealed to Zelensky, calling for her husband to be released and given guarantees that “his life would not be in danger.”

“My husband is being persecuted for political reasons against the laws of Ukraine,” Marchenko said.

Medvedchuk is the head of the political council of Ukraine’s pro-Russian Opposition Platform — For Life party, the largest opposition group in the Ukrainian parliament. He is one of its 44 lawmakers in the 450-seat Rada. The activity of his party has been was suspended for the duration of the war at Zelensky’s initiative.

“The war automatically turned Medvedchuk into (Russia’s) accomplice, since he personally advised Putin on Ukrainian affairs and directly or indirectly influenced many of the Kremlin’s decisions,” Fesenko said. “Zelensky no longer needs to be careful, and by arresting Medvedchuk, he wants to show that he is not afraid of the Kremlin and is ready to bargain, having different cards on the negotiating table.” 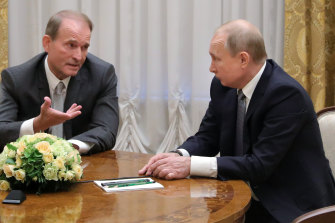 Ivan Bakanov, the head of Ukraine’s national security agency, said on Wednesday that the Russian security service, the FSB, had planned to evacuate Medvedchuk, disguised as a Ukrainian serviceman, to Moscow through the disputed territory of Transnistria in Moldova, where Russia has troops stationed.