Moscow: The Kremlin has denied speculation that President Vladimir Putin is on the brink of resigning, after a new law that would grant him lifetime immunity from prosecution prompted reports he was about to stand down for health reasons.

Putin, who has already led the country for two decades, won the right to extend his rule until 2036 when Russians approved changes to the Constitution in a referendum this summer. But some analysts suggested the President had no intention of staying on for another 16 years, and that the changes simply allowed him to set his own timetable for departure rather than serve as a "lame duck" until his current term ends in 2024.

A raft of legislation considered by MPs this week added fuel to that speculation, including a law that would grant former presidents immunity from prosecution even after leaving office. Another law proposed they also be made senators for life. 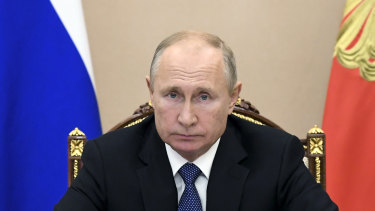 Putin has made several video speeches but rarely appeared in public during the pandemic.Credit:Sputnik Kremlin

Putin's spokesman, however, dismissed the rumours as "nonsense" when speaking about a British tabloid report that the President was suffering from Parkinson's disease and that his family had urged him to step down. "The President is doing well," Dmitry Peskov, the Kremlin spokesman, told reporters.

Russia's longest-ruling leader since Stalin has made several televised addresses since the start of the coronavirus pandemic but has rarely appeared in public.

The 68-year-old has held talks with officials via video-link from a windowless bunker, though some meetings have been conducted in person.

Over the course of his rule, Putin has emphasised his rude health, with photo opportunities of topless horse rides and judo matches. While he maintains approval ratings most Western leaders would envy, those numbers dropped to record lows this spring as a strict coronavirus lockdown battered the already troubled economy.

Russia has proved reluctant to impose a second lockdown. Instead, the Kremlin has largely distanced itself from the crisis, handing over decisions on restrictions to regional authorities.

Russian presidents are currently immune from prosecution until they retire, though the bill discussed by parliament this week would extend this protection for life unless overturned by a majority of MPs. The bill is all but certain to be approved by the lower and upper houses of parliament, which are controlled by pro-Putin parties. Observers have taken the measure as a sign that Putin does not plan to cling on to power for life, even if he has no imminent plans to leave.

One of Putin's first acts as president was to grant immunity to Boris Yeltsin, his predecessor, who faced questions over corruption connected to his time in power. This is seen as a key reason why Yeltsin picked the former KGB chief to succeed him. Since then, the Kremlin has promoted the "stability" offered by the Putin regime and Russian officials have made hay out of electoral uncertainty in the US.