How chiefs got a mauling on Day One from woke watchdog: Row erupts after launch of race issues plan as leaders refuse to agree over ‘institutionally racist’ label

A row erupted following the launch of the plan to tackle racism yesterday as police chiefs were grilled on whether forces were ‘institutionally racist’.

In farcical scenes after the action plan was announced, the leaders refused to agree or disagree with the label.

They were then chastised by chairman Abimbola Johnson, the barrister in charge of the Independent Scrutiny and Oversight Board overseeing the project, who declared it was an ‘easy question to answer’.

She added it was ‘disheartening’ that senior police leaders could not accept the phrase ‘institutionally racist’ – a term first used to describe Scotland Yard after blunders allowed the racist killers of black teenager Stephen Lawrence to escape justice in 1993.

During the launch, which was billed as a historic opportunity to tackle racism within forces, she also told the chiefs that they should be ‘woke’ and proud. 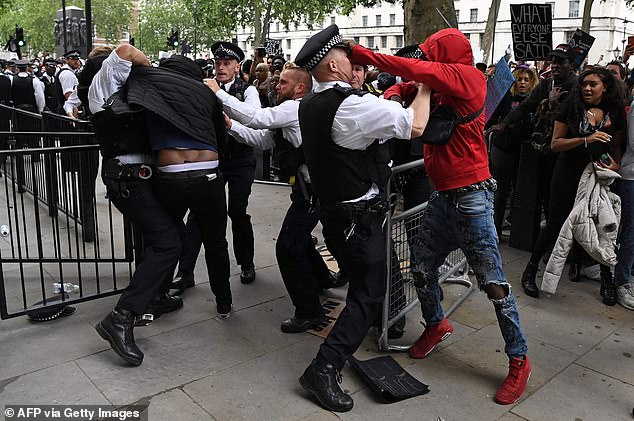 Police chiefs could not agree on calling forces ‘institutionally racist’ after the launch of the plan to tackle racism yesterday (pictured: officers scuffling with an anti-racism protestor in London 2020 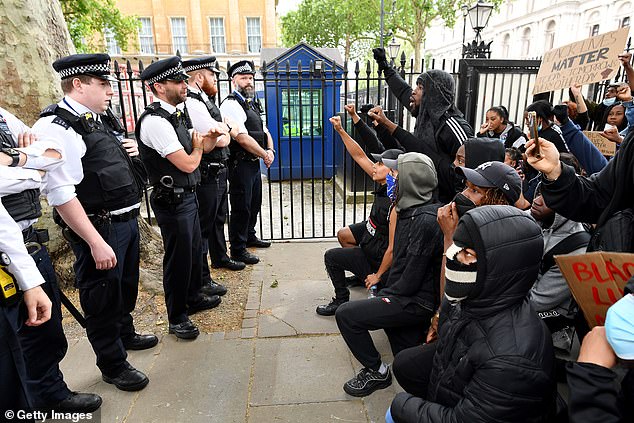 The National Police Chiefs’ Council (NPCC) and the College of Policing launched the project to eradicate racism as they are ‘ashamed’ of the discrimination and bias which plagues forces.

It is the first time in history that leaders have come up with their own plans to tackle racism, announcing proposals that include officers being given history lessons on past policing of black people.

But within minutes of announcing the £2.5million initiative, there were clashes after Miss Johnson declared that police were ‘still institutionally racist’.

College of Policing boss Andy Marsh refused to express an opinion on the matter and West Midlands Chief Constable Sir Dave Thompson, who is leading the project for NPCC, said that ‘there is always this danger of polarisation of language’, adding: ‘I find it hard to answer as a yes or no answer.’

Britain’s most senior black officer, West Yorkshire’s temporary Deputy Chief Constable Tyron Joyce, also dodged the question, saying there is a danger that ‘we can spend the next two years arguing about two words’. 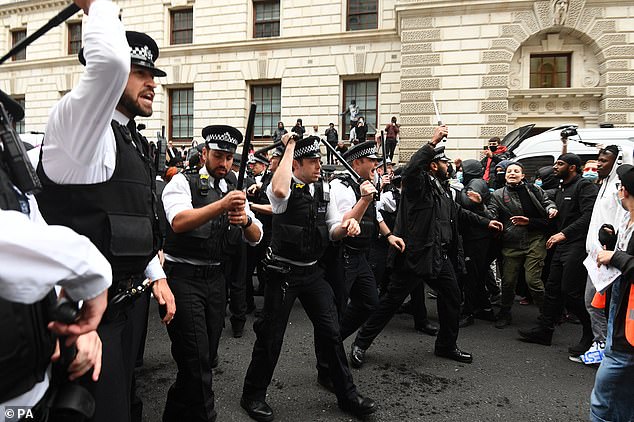 West Midlands Chief Constable Sir Dave Thompson said he found it ‘hard to answer as a yes or no answer’ in response to if the forces are institutionally racist (pictured: a Black Lives Matter protest rally on Whitehall, London, in 2020)

But Miss Johnson said police leaders shouldn’t be afraid of admitting systems are inadequate: ‘It’s not down to policing to say whether it is institutionally racist. It has been found to be.’ The barrister also urged chief officers to be woke and proud: ‘Woke is used as though it’s a negative word – it’s not.

But Mr Joyce rejected the label, saying: ‘How can it be woke to be more legitimate and more effective in how we stop and search people?’

The 57-page plan, due to be implemented over the next few years, promises to shake up officer training, recruitment and the use of force.

It is designed to win back the confidence of black people, who are nine times more likely to be stopped and searched than white people and five times more likely to have force used upon them. It comes after 250,000 people took to British streets in 2020 for Black Lives Matter protests. They were calling for racial justice after the murder of George Floyd by a police officer in the US.

According to the proposals, forces should strive to be ‘institutionally anti-racist’, with zero tolerance for discrimination and there should be increased involvement of black community groups in the oversight of policing.

The plan states: ‘We accept that policing still contains racism, discrimination and bias. We are ashamed of those truths, we apologise for them and we are determined to change them.

‘We have much to do to secure the confidence of black people, including our own staff. We hope that in the future, we will be seen as the institutionally anti-racist organisation we want to be because we took action.’

But the document goes on to state: ‘It is not the aim of the plan to characterise all officers as racist or to suggest that the entire system is broken. The vast majority of police officers are not racist.’

One of the measures planned is an education programme for officers and staff with lessons on the ‘national and local history of policing black communities’.