Rodney William Marsh MBE, who died aged 74 on Friday, will be remembered as an acrobatic wicketkeeper whose lower-order batting rescued Australia from many mid-innings crises.

He started his Test career under a cloud but ended it 14 years later as a star. Selected in the Australian team in the Ashes series of 1970-71 to replace the popular Brian Taber, he dropped a few catches in his Test debut in Brisbane and was nicknamed “Iron Gloves”. The following month in the Sydney Test he was booed by a section of the pro-Taber crowd. 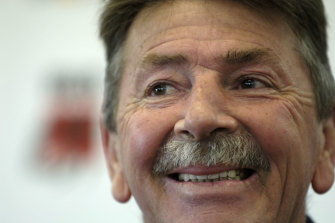 Rodney Marsh in Adelaide in 2005. Credit:Fairfax

But the tough, moustachioed Marsh did not let this negative crowd reaction upset him. If anything, it increased his determination to succeed. In his Test swan song against Pakistan in Sydney in January 1984, he was cheered lustily by the crowd as he took five catches in his final innings and became the first wicketkeeper to reach 350 Test dismissals. 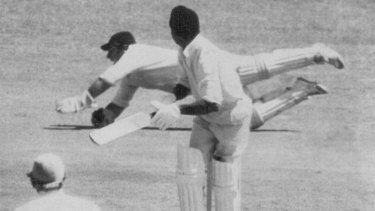 Rodney Marsh dives full length to his right to dismiss World XI captain Garry Sobers for a duck off the bowling of Graeme Watson. December 6, 1971.Credit:Fairfax

Caught Marsh, bowled Lillee is also the title of Ian Brayshaw’s biography of the Australian legends. In the foreword, captain Ian Chappell emphasised the role the Lillee-Marsh combination played in Australia’s success in the 1970s and ’80s. “As players, they were a captain’s dream. At one end a talented fast bowler who, with huge heart, was always ready to give just one last effort for his team … At the other end a man whose skill with the gloves could lift a team with a brilliant catch or who could offer some tactical advice that might turn a game in the team’s favour.”

Marsh was nicknamed Bacchus by his teammates after a train ride through the Victorian countryside had brought them to a station where a sign announced the name of the town, Bacchus Marsh.

Born in the Perth suburb of Armadale on November 4, 1947, Rod Marsh played backyard cricket with his elder brother Graham, who became a professional golfer and won 11 times on the European tour. Both brothers represented Western Australia in cricket at schoolboy level. Rod played his first competitive match at the age of eight for the Armadale under-16s. He kept wicket from the start, but batting was his strength. At 13 he captained the state schoolboys’ team and joined the West Perth district club.

When he debuted for West Perth’s first XI he was a specialist batsman, as established WA wicketkeeper Gordon Becker also represented the club. To further his keeping, Marsh joined the University Club. He made his first-class debut for WA as a specialist batsman against the touring West Indies in 1968–69. He had an up-and-down start, scoring 0 and 104. He married Roslyn in 1969 in Western Australia. 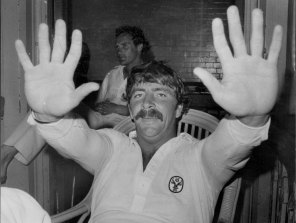 Marsh began a line of world-class Australian wicketkeeper-batsmen. Ian Healy and Adam Gilchrist followed in his padded footsteps. Marsh scored 3633 runs at 26.51 with three centuries and 16 fifties, 343 catches and 12 stumpings in 96 Tests.

Thickset in build with hairy legs and hairier lips, Marsh was combative in approach. His combination of concentration, determination, diving athleticism and skilled glovework made him an object of admiration and inspiration. His tactical expertise and people skills provided a recipe to make him an ideal captain but doors did not open for him.

He thought both deeply and on the spot. He had pleaded with skipper Greg Chappell not to instruct Trevor Chappell to bowl that notorious underarm delivery in a one-day international against New Zealand at the MCG in February 1981. But Greg did not listen and it turned out to be one of the worst controversies in cricket’s history.

Marsh became the first Australian keeper to record a Test century when he scored 118 runs against Pakistan in Adelaide in December 1972. He hit two more Test hundreds; against New Zealand, also in the Adelaide, a year later and against England in the historic Centenary Test at the Melbourne Cricket Ground in March 1977.

This was also the first century by an Australian keeper against England. In the same match, Marsh eclipsed Wally Grout’s record of 187 Test dismissals. Earlier, he had narrowly missed hitting a Test hundred in the January 1971 Test, his fifth, when captain Bill Lawry declared the innings closed with Marsh unbeaten on 92. 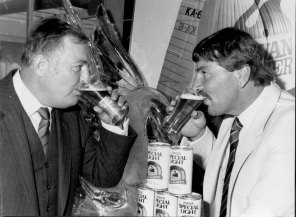 Let Marsh narrate this tale of a missed milestone from his autobiography You’ll Keep (written with Ian Brayshaw) in 1975. “Even his [Lawry’s] own partisan crowd could not remain faithful to him after he declared with my score only eight runs short of a century, which would have been the first by an Australian keeper in a Test match. I wasn’t at all upset about it.”

Rod Marsh was more than just a successful wicketkeeper-batsman. His contribution was more than just statistical. He was eye-catching when hitting fours, taking diving catches or stumping amazed batsmen at Test, first-class and in limited-overs cricket. And he spoke his mind without fear.

After retirement, he joined the Channel 9 commentary team. But his views on too many one-day matches angered Kerry Packer and Marsh was sacked. This turned out well for him and for Australia as he enhanced his reputation as the head coach of the Australian Cricket Academy in Adelaide in the 1990s and early 2000s.

The multi-talented Marsh was quick to spot the talents of Ricky Ponting, Glenn McGrath and Brett Lee, among others. In 2001, he ventured overseas where he was appointed head of England’s national academy and was also appointed an England selector. He stepped down in September 2005, England having just won the Ashes for the first time in 16 years. What a glove of irony! 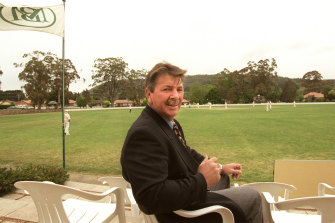 He authored four cricket books; You’ll Keep, Gloves of Irony, The Inside Edge and Gloves, Sweat and Tears.

Rod’s son Dan is a former captain of the Tasmania cricket team, and his son Paul is the chief executive of the AFL Players Association.

Rod appeared in an episode of Who Do You Think You Are? in 2010 where it was revealed that his grandmother had died after giving birth to one of his aunts, leading his grandfather to put their three children, including Marsh’s father Ken, up for adoption.

On February 24 Marsh, 74, suffered a heart attack while on his way to a charity event in Queensland.

He died in hospital in Adelaide on Friday.

Rodney Marsh is survived by his wife Ros and sons Paul, Dan and Jamie.