REVEALED: SoftBank is the ‘Nasdaq whale’ that drove up tech stocks with options bets tied to $50 billion worth of shares – but may have suffered ruinous losses after crash this week

SoftBank made significant option purchases during the run-up in the U.S. stock market in recent weeks as a way of temporarily investing some proceeds from asset sales, people familiar with the matter said on Friday.

Investors had been speculating about the ‘Nasdaq whale’ conducting massive options purchases. Now, sources tell the Wall Street Journal that SoftBank purchased some $4 billion in options contracts controlling $50 billion worth of tech shares.

The trades were revealed just as Wall Street’s runaway technology-led rally came to a screeching halt, with the Nasdaq plunging 5 percent on Thursday and dropping another 2.5 percent on Friday.

The index remains well above its March lows, and SoftBank’s positions are not believed to have caused the drop-off, which most market watchers are calling simple position squaring. 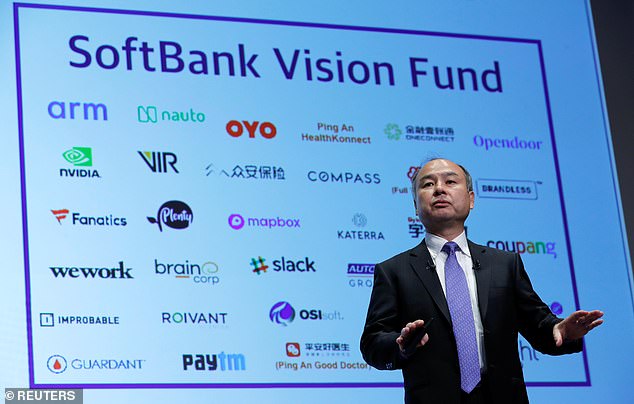 Though the details of SoftBank’s position’s are not entirely clear, traders tell the Journal that the mystery whale has been making mammoth purchases of call options on tech stocks such as Amazon, Facebook, Netflix and Microsoft – positions that could have suffered greatly in this week’s reversal.

‘These are some of the biggest trades I’ve seen in 20 years of doing this,’ derivatives-focused US hedge fund manager told the Financial Times, which first reported SoftBank’s options activity. ‘The flow is huge.’

SoftBank’s derivatives purchases could shed light on the Nasdaq and S&P 500 rise just two days ago to record highs, which seemed to put the coronavirus sell-off in the rearview mirror. 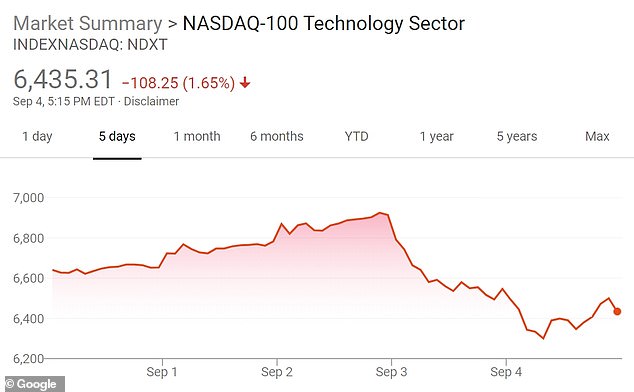 SoftBank bought a roughly equal amount of call options tied to the shares it bought, according to the Journal. Investors typically pay premiums to buy call options, which give them access to a much higher amount of shares on paper.

SoftBank’s options of $4 billion generated an exposure of about $50 billion, according to the WSJ report.

But market players were unable to gauge the extent to which Softbank’s derivative purchases contributed to recent gains. Nor was there strong evidence that the end of the buying could have triggered the stocks tumble on Thursday and Friday.

Raymond James market strategist Ellis Phifer said the buying by SoftBank would have helped push up shares of tech companies in recent months, although the stocks were benefiting from other trends. The extra demand from SoftBank ‘would have created a positive feedback loop,’ he said.

SoftBank has received $42 billion in cash from a string of recent asset divestments, including the sale of stakes in its Japanese telecommunications unit, wireless carrier T-Mobile US and Chinese e-commerce giant Alibaba Group.

The latest bet on publicly listed tech stocks represent a departure for SoftBank.

It has been under pressure from hedge fund Elliott Management to use this cash to pay down debt and buy back shares, after its attempt to raise a second $100 billion Vision Fund struggled because of the lukewarm investment performance of its predecessor and faltering bets .

SoftBank has been temporarily investing some of the proceeds from the asset sales in the U.S. stock market before returning it to shareholders and paying down debt.

Reuters could not immediately determine what options strategy, or combination of put options and call options, SoftBank used. Hedging around the purchase and sale of options can magnify moves in the underlying market.

Buying options can be a cheaper way of investing in an underlying security than direct purchases. But selling uncovered options can be extremely risky. Options prices are determined by factors such as how far away the strike price is, the time to maturity and how volatile the markets are.

The main indexes on Friday were recoiling from the all-time highs hit midweek. The Nasdaq was on track for its biggest two-day fall since March as investors dumped heavyweight technology stocks, while concerns around a patchy economic recovery also hit the S&P 500 and the blue-chip Dow.

‘If SoftBank was selling puts its a very dangerous strategy. The big questions are – the scale of what they were doing and are they selling puts to buy calls – because that’s when you get embedded leverage,’ said Michael Purves, founder and CEO of Tallbacken Capital.