A Melbourne soccer player wrongfully detained in Thailand and released following a campaign led by former Socceroo Craig Foster is suing the federal government for negligence and breaching its duty of care.

Hakeem al-Araibi, tortured in Bahrain and granted a protection visa by Australia, was on his way to a belated honeymoon with his wife in November 2018 when he was detained on arrival at Bangkok’s Suvamabhumi Airport. 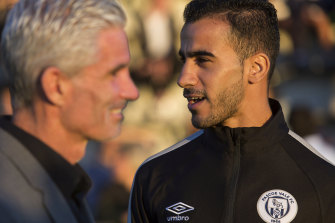 Hakeem al-Araibi and Craig Foster, who co-ordinated the campaign to get him out of a Thai prison.Credit:Paul Jeffers

Thailand was acting on an Interpol red notice issued by Bahrain for his extradition. But it was invalid and Mr Araibi should never have been detained because a red notice cannot be issued against a refugee from the country they initially fled.

Australian Federal Police commissioner Reece Kershaw later acknowledged that a trail of bureaucratic bungles by agencies within the Department of Home Affairs led to his detention.

By the time Home Affairs confirmed that he was a refugee, Mr Araibi was already behind bars and remained in Thai prisons for more than two months. Interpol then cancelled the red notice on the basis he was a refugee.

Thailand, which is not a signatory to the refugee convention, proceeded with Bahrain’s extradition request before eventually releasing him on February 11, 2019. 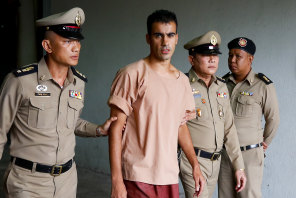 Thai prison officers escort Hakeem al-Araibi following an extradition hearing in Bangkok Criminal Court in February this year. A week later, he was released and flew back to Melbourne.Credit:AAP

A statement of claim filed in the Supreme Court of Victoria by Holding Redlich lawyers on behalf of Mr Araibi, alleges he suffered injury, loss and damage, including post-traumatic stress disorder, adjustment disorder, and lost income.

He had been working as a carpenter and an Uber driver at the time and was unable to work for the 76 days that he was detained in Thailand. He continues to incur medical expenses, according to the writ.

If it weren’t for the Australian government’s negligence and breaches in its duty of care, he never would have been detained, the writ alleges. Interpol would have known Mr Araibi was a refugee and cancelled the red notice before he travelled, and Mr Araibi could have known of the risks and decided not to travel, it further states.

“The plaintiff was in a position of extreme vulnerability, being a person with a well founded fear of persecution by the Bahrain government, a confirmed refugee and unaware of the red notice,” the writ states.

“By accepting [Mr Araibi’s] refugee status and issuing the refugee visa, issuing the [travel document for refugees], processing the red notice, allowing the plaintiff to leave Melbourne Airport to travel to Thailand, failing to inform the plaintiff of the red notice so that he was unable to protect his own interests, the [Commonwealth] took on a position of responsibility for the plaintiff’s welfare.”

Border Force, Federal Police, and Home Affairs had been alerted of the red notice on November 8, 2019, it’s alleged, before he travelled on November 27.

A photo of Mr Araibi in chains helped to galvanise a passionate campaign in Australia, which was led by Foster, the former captain of the Socceroos.

Bahrain had sought his extradition because it claimed that he was involved in vandalising a police station in 2012. He has described being tortured before being convicted in absentia for the crime, but has always maintained his innocence pointing out that he was playing in a televised football match at the time.

Mr Araibi fled to Australia in 2014, was granted refugee status in 2017 and played for Pascoe Vale FC in Melbourne.

He became an Australian citizen once he returned to Australia in 2019 and has spoken movingly about his love for Australia and fear of being returned to Bahrain.

Mr Araibi and his solicitors were contacted through Holding Redlich.

The Home Affairs Department said it was not aware of any litigation claim filed by Mr al-Araibi for damages for post-traumatic stress disorder and lost income.