Families are loading up on fireworks ahead of Independence Day this Sunday amid an ongoing shortage of the Fourth of July sparklers.

“Every year we come out and get fireworks so the kids can go and pop them … sparklers, some smoke bombs, some things that twizzle up in the air,” Kansas City, Missouri native Brandon Grant told FOX 4 news of getting a supply despite low inventory. 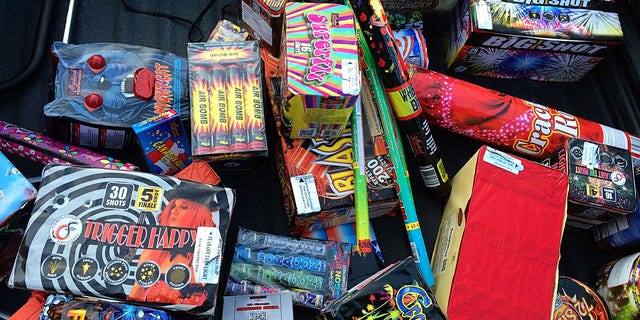 Families are loading up on fireworks ahead of Independence Day Sunday – and amid an ongoing shortage of the Fourth of July sparklers.

He purchased a supply from Jake’s Fireworks shop in Riverside, Missouri, where an employee told FOX 4 much of the shipment has still not arrived days ahead of nationwide celebrations.

“It’s just sitting in ports in Los Angeles and Long Beach and we’re just trying to get drivers to drive it across here,” Shelley Jerue, an employee at Jake’s Fireworks, told FOX 4.

A number of firework retailers across the country are in a similar boat. Earlier this month, Youngstown, Ohio-based Phantom Fireworks, the country’s largest consumer-based retail fireworks company, urged shoppers to buy their fireworks well ahead of the holiday due to supply chain issues and global shipment delays, the company said on its website.

Another fireworks seller in South Dakota has reportedly been packed with consumers stopping in for last-minute supplies.

“We had lines all the way around the building,” Tom Skoog, the owner of Big Fireworks said, according to News Center 1.

Some cities, meanwhile, have already canceled fireworks shows due to a lack of supplies. Roland Park called off its Northeast Johnson County Fireworks display that was slated for July 3 in Kansas and Lee’s Summit in Missouri also canceled its show, the city announced on Twitter.