Boris Johnson and the Tories are at ‘greater risk than Labour’ of losing votes to Nigel Farage and the Brexit Party on December 12, according to polling guru Sir John Curtice 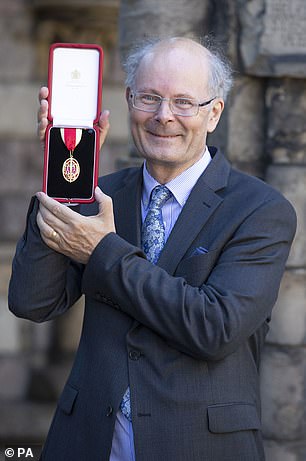 Sir John Curtice, pictured receiving his knighthood in July 2018, suggested the Tories have more to fear than Labour from the Brexit Party

Boris Johnson and the Tories are at ‘greater risk than Labour’ of losing votes to Nigel Farage and the Brexit Party on December 12, according to polling guru Sir John Curtice.

Sir John, a professor of politics at Strathclyde University, said Mr Farage’s appeal is ‘almost wholly confined’ to Leave voters while the Tories are able to call on some Remain support but ‘disproportionately’ are backed by Brexiteers.

In contrast, at the last election Labour was able to secure the support of ‘twice as many Remain supporters as it did Leave voters’.

Sir John suggested that meant Mr Johnson had more to fear than Jeremy Corbyn from the challenge posed by Mr Farage.

‘Because the Brexit Party only appeals to Leave voters, these different balances inevitably mean the Conservatives are at greater risk than Labour of losing votes to the Brexit Party,’ Sir John wrote in a piece for the Sunday Telegraph.

Mr Farage has argued that his appeal would help the Brexit Party win in Leave-voting Labour-held seats in areas like the Midlands, south Wales and the north of England where the Tories have little prospect of victory.

But Sir John said polling suggested that argument was ‘somewhat suspect’ because the proportion of Labour Leave voters switching to the Brexit Party was broadly the same as those switching to the Tories.

‘In short, there is little evidence to support the view that Mr Farage is damaging Labour more than the Tories’ – and plenty to the contrary,’ Sir John wrote. 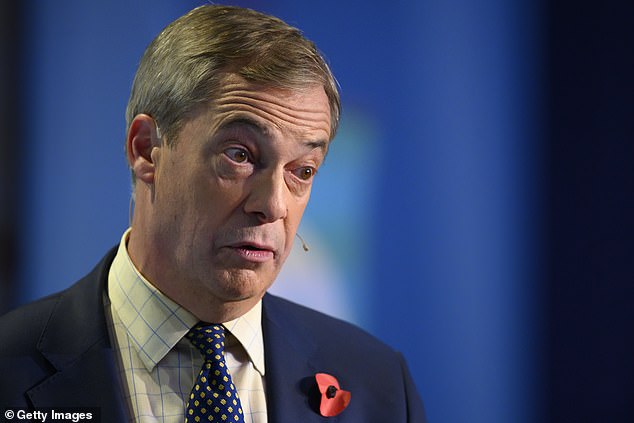 Nigel Farage, pictured in Newport on November 8, is under growing pressure to stand down his Brexit Party candidates at the election to avoid splitting the Leave vote 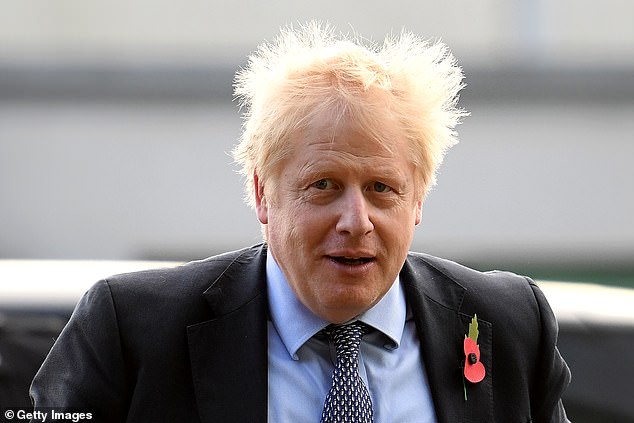 Boris Johnson, pictured on a campaign visit near Elgin in Scotland on November 7, retains a commanding poll lead over Labour

The analysis comes after it emerged that senior allies of Mr Farage and Mr Johnson have held secret last-minute talks in an effort to strike a deal that would stop the Brexit Party splitting the Tory vote and letting Mr Corbyn into Downing Street.

The Mail on Sunday revealed that a close confidant of Mr Farage has held talks with senior Tory ‘power brokers’ over a deal to pull the vast majority of Brexit Party candidates out of the election.

In return, Mr Johnson would promise to strike a harder deal with Brussels after winning a majority.

The offer, made by former Ukip treasurer Andrew Reid, comes as friends of Mr Farage say that he is ‘feeling the heat’ over his defiant insistence on fielding hundreds of Brexit Party candidates.

Mr Farage is facing growing pressure to stand down his candidates and give Mr Johnson a clear run at victory on December 12.

The Brexit Party leader has repeatedly offered the PM a Leave Alliance but only if the premier pledges to ditch his deal and campaign for a ‘clean break’ split from Brussels. 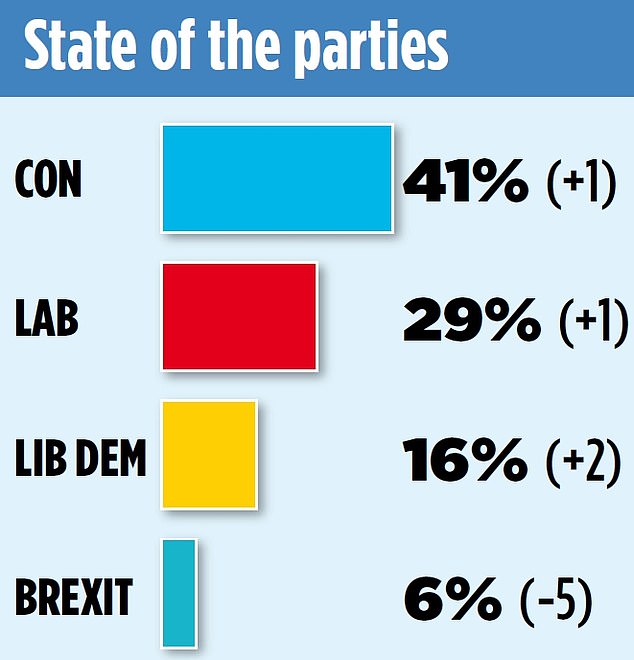 Mr Johnson is fighting the election on a pledge to implement his Brexit deal and has made clear he has no intention of scrapping it.

Fears of the Brexit Party splitting the Leave vote on polling day came as the Tories maintained their 12 point lead over Labour from last week.

A Deltapoll survey showed that early Tory setbacks have not hit the party’s support levels.

Their headline figure is 41 per cent, with Labour on 29 per cent – both up one percentage point from last week – with the Liberal Democrats up two points on 16 per cent. The Brexit Party is on just six per cent.