What a croc up! Police swoop on Kent town over fears of ‘crocodile on loose’ only to discover 2ft plastic TOY in grass that made jogger ‘jump like a baby gazelle’

Police were called out to an alligator on the loose this morning — only to find it was a 2ft long plastic toy.

A ‘concerned’ member of the public reported the reptile shortly before 8am after spotting it on the side of the road in Sheerness, Kent.

An officer attended and found the creature lurking in long grass. 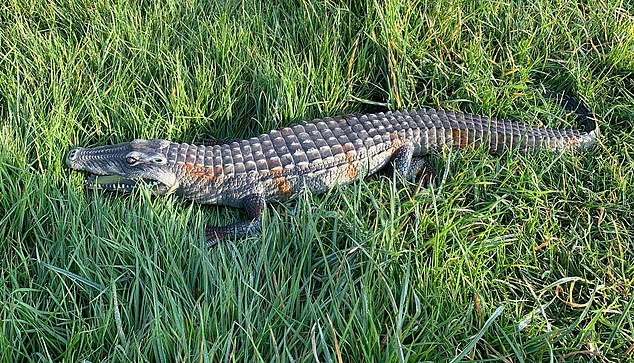 Kent Police shared an image of the plastic toy in the grass, which has spooked one runner and caused another resident to call them out, over concerns about the reptile

They seized the toy to stop it from scaring anyone else into reporting it.

A police spokesperson said: ‘Kent Police was called to Queenborough Road, Sheerness at 7.42am after a concerned member of the public reported that they thought they had seen an alligator at the side of the road.’

A runner, who did not want to be named, told Kent Online: ‘To whomever left this plastic alligator along the Queenborough road this morning you caused me to jump like a baby gazelle whilst almost jogging over it.

‘I suppose you think you’re funny? Well, so I do. Keep up the good work buddy.’

Kent Police Swale, which is ‘always looking to recruit extra investi-gators’, said the attending officer was relieved to find it wasn’t real.

The local unit Tweeted two pictures — one of the toy in its wild habitat and another of it on the patrol car roof for scale.

It read: ‘Kent Police Swale were called to reports of a crocodile in Queenborough this morning.

‘1 Section were snappy in getting there and fortunately it turned out not to be real.

‘We are always looking to recruit extra Investi – gators to join us too.’